Shaken and Stirred: “No Time to Die” 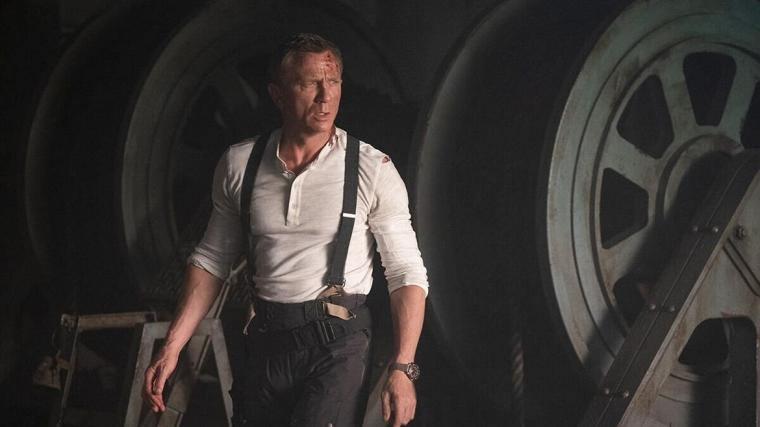 Daniel Craig in No Time to Die

NO TIME TO DIE

After 59 years and 24 movies, you wouldn't think the James Bond series still had the power to shock. But in the latest, 25th installment of this insanely venerable franchise, there's a scene that I'd somehow never before witnessed in a 007 adventure, one that finds Bond speeding along winding European roads while hired assassins in another pair of vehicles race after him with guns a-blazin'. Come on, you're probably thinking. That scene is in every Bond flick. And you'd be right, except for the fact that this particular sequence also boasts a terrified five-year-old girl cowering in Bond's backseat. That's No Time to Die in a nutshell. It's more of the same – and at 163 minutes, a lot more of the same – but with heightened yet human-scale threat, as well as an emotional urgency that makes the old feel close to new.

For reasons creative, contractual, and pandemic-al, it's been six years since Daniel Craig's last cinematic appearance as Bond, and as director Cary Joji Fukunaga's take on 007 opens, our hero is still with his Spectre sweetheart Madeleine Swann (Léa Seydoux, far more vivid than she was in 2015). A half-dozen years has got to be a record for Hollywood's most continually eligible bachelor, but fear not, fans: Bond breaks up with the woman, albeit regretfully, before Billie Eilish begins her languid crooning of the opening credits' title track. We then jump ahead five years, with the now-off-the-grid MI6 agent lured back into action, successively, by his longtime CIA friend Felix Leiter (Jeffrey Wright) and Bond's replacement Nomi (Lashana Lynch), the latter a slick operator who has even been given her predecessor's “007” identity. (Nomi teases Bond with “I bet you thought they'd retire the number,” and Craig's crestfallen expression suggests that yeah, that's precisely what he thought would happen.)

Bond's mission is to help locate and retrieve one Valdo Obruchev (David Dencik), a kidnapped genetic scientist who had been working on a bioweapon that targets its victims through DNA coding. There's every indication that Obruchev is also a mole working for the criminal enterprise SPECTRE. But that notion gets flipped on its head when, at a fancy bash in Cuba, the bioweapon's virus-laden mist falls on Bond and a ballroom full of Spectre cronies and only Bond escapes with his life. Why would an instrument designed to kill SPECTRE's super-spy adversary wind up killing SPECTRE minions instead? Who's pulling the strings? And why, given how fantastically funny and goofy and fierce she is as Bond's CIA partner in Cuba, is the ravishing Ana de Armas – Craig's co-star in 2019's Knives Out – only in this one freaking scene? 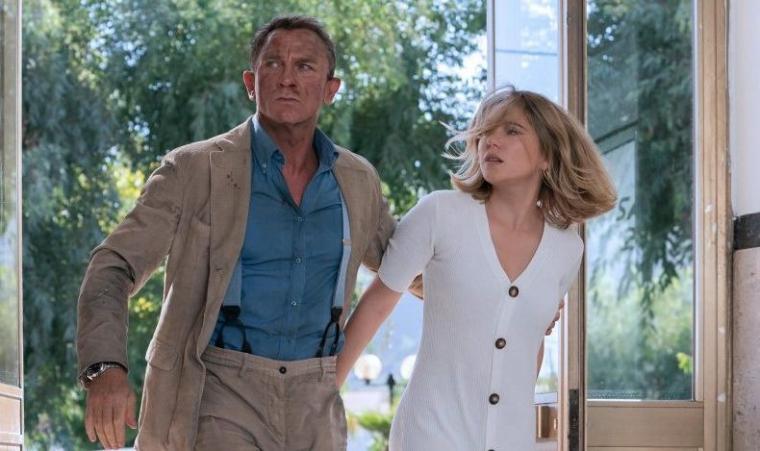 We never get an answer to that last question, and frankly, I would have appreciated one. (De Armas' bubbly “I trained three weeks for this!” may be the most unanticipated big laugh in Bond history.) But thankfully, No Time to Die is such a thorough good time that we aren't granted the opportunity to miss de Armas for long.

Fukunaga, who made a splash (and won an Emmy) for directing the first season of HBO's True Detective, does an overall smashing job with the requisite action choreography, its highlights including an early, frenzied motorcycle chase through rural Italian streets and a near-climactic free-for-all in a decommissioned World War II military base. The director also pulls off a marvelously intense prelude involving a family tragedy from Swann's past – a nail-biter sequence that isn't reminiscent of other Bond openers so much as the first 10 minutes of Tarantino's Inglourious Basterds. (On that subject, Christoph Waltz's Spectre villain Ernst Stavro Blofeld shows up in imprisoned-Hannibal-Lecter mode, his presence also an excuse to re-introduce Seydoux's Swann, who's serving as Blofeld's therapist. Because of course she is.) And after being blandly employed for the '15 entry, the series' returning second bananas are allowed to be fun again, reminding us of the comfortable delights of Ralph Fiennes' dyspeptic M, Naomie Harris' wonderfully dry Eve Moneypenny, and Ben Whishaw's Q, a tech-geek genius so stalwart and eccentric that he's totally deserving of his own franchise.

Those, however, are pleasures of the familiar, and what positions No Time to Die on a somewhat higher plane than many of its forebears' is the film's unexpected capacity for surprise. Not always, of course. Some of the supporting figures – primarily Dencik's Obruchev, with his comically exaggerated Russian accent, and Billy Magnussen's Logan Ash, with his too-amiable-to-be-believed grins – are typically, overtly cartoonish. The series' penchant for really bad puns hasn't abated a bit. (After a weaponized fake eyeball explodes inside a henchman's head, Bond predictably remarks that the pricey accessory “blew his mind.” I keep waiting for a Bond movie to send the secret agent undercover as a standup comic in Branson.) Those who relish the nearly 60-year (!) 007 traditions won't be disappointed: the expansive opening credits – and their design here is beautiful – are still a combo platter of arresting and vaguely erotic images that last the length of an entire song; composer Monty Newman's theme music is heard in several iterations; martinis are ordered shaken, not stirred. (I will forever relish President Bartlett, on The West Wing, explaining to his aide that stirring the drink prevents it from being contaminated with chipped ice: “James Bond is ordering a weak martini and being snooty about it.”) 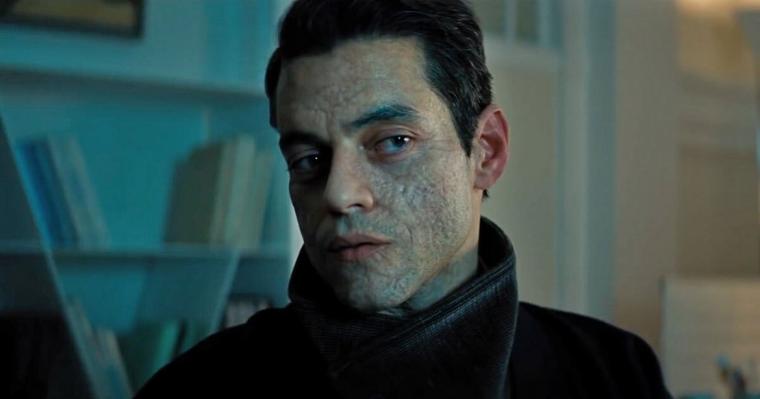 Yet although there's also the requisite über-villain for Bond to tangle with here, and although this is the third Bond in a row to find said character played by a previous Oscar winner, Rami Malek presents us with a criminal mastermind who's both more perverse and more melancholic than we're used to. It's certainly icky to watch Malek's facially scarred Lyutsifer Safin chaperone that aforementioned five-year-old (a criminally cute Lisa-Dorah Sonnet) around his compound, and the ultimate goal for his bioweapon – the eradication, through DNA sampling, of entire races of people – is legitimately appalling. This monster's inherent sadness, however, sticks with you. Safin speaks in a faraway quiet, like someone who knows that he's lost even while he's winning, and Malek has devised an intriguingly childlike tone of voice and clever changes of expression for the man, implying that his emotional growth effectively ended at age 10 (which makes sense considering his life-altering pre-teen trauma). Malek can be a lot to take as an actor. But his usual physical tics and verbal idiosyncrasies seem relatively under control in No Time to Die, and even though his villain's devilish first name is hardly subtle – was “Lucifer” itself deemed too on-the-nose? – Malek's work is uncharacteristically so.

And it makes sense that we should actually feel something for this specific Bond nemesis, because Fukunaga and his trio of additional co-writers (Neal Purvis, Robert Wade, and that wondrous Fleabag creator/star Phoebe Waller-Bridge) clearly want us to feel something about all of it. There are chases and shootouts and snappy comebacks aplenty, but Bond's 25th-anniversary adventure – and, as has been widely reported, the final installment to star Daniel Craig – is anything but blithe. While the movie isn't striving to be an epic tearjerker in the vein of Titanic or the third Lord of the Rings, it's at least on par with Avengers: Endgame – a big-budget blockbuster that understands the emotional connection (many) audiences have with its franchise, and that honors that affection with sincerity, gravitas, and more wrenching portrayals than you may have imagined the series could deliver. (Craig's forceful, haunted, yet somehow not morose performance is akin to Robert Downey Jr.'s in Endgame, the sort of character-capping turn that you just know will be unfairly ignored come Oscars season.) It's hard to tell where this series will go from here. Maybe, please, with more movies for the exceptional Lashana Lynch? Or Ana de Armas, for Pete's sake? But while I only wish the best for future 007s after No Time to Die, it might be a challenge, at least for the first couple of tries, for them to go anywhere but down.