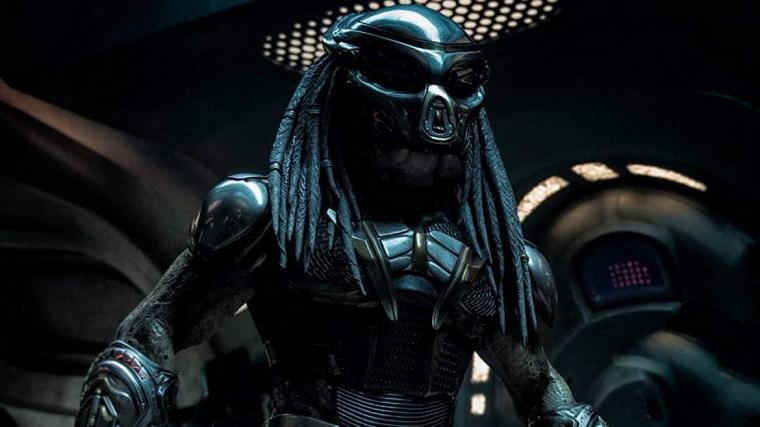 Even though Hollywood's summer tends to begin in the last days of April and end a couple weekends before Labor Day, it is, you know, still technically summer. Consequently, I feel completely within my rights to decree The Predator perhaps the happiest summer-movie surprise of 2018 – a thrillingly funny, nasty, unpretentious good time that's leagues more entertaining than any deeply unnecessary sequel/reboot of its type should ever be.

I'm tempted to give almost full credit for this to director/co-writer Shane Black, a mainstay of '80s/'90s action blockbusters (and, with The Last Action Hero, wannabe-blockbusters) who delivered a cult classic with his 2005 comedy noir Kiss Kiss Bang Bang. Everyone I know who's seen that Robert Downey Jr. gem likes it. And if they gave it a chance, I think most people would get a similar kick out of Black's latest cheeky endeavor – a self-aware, occasionally self-mocking goof that doesn't apologize for its clichés so much as greet them with loving bear hugs … right before ripping them in half and giggling as the innards hit the floor.

Lighter in tone than Arnold Schwarzenegger's 1987 sci-fi thriller or any of its offshoots (including those in the lackluster Alien v. Predator mini-verse), Black's The Predator finds the dreadlocked hunter/gatherers from another world visiting Earth yet again, this time leaving behind some advanced weaponry and wardrobe that military sniper Quinn McKenna (Boyd Holbrook) immediately ships to his suburban P.O. box. The package, alas, ends up in the hands of Quinn's young son Rory (Jacob Tremblay), a child whose mild Asberger's gives him a unique understanding of the predators' alien tongue. Cutting to the chase: The predators, one of them 11-feet tall, want their devices back; Quinn wants to save his son from their grasp; science teacher Casey Bracket (Olivia Munn) wants a predator for biological study; and a collection of mentally unstable military prisoners joining Quinn on his quest – a crew accurately nicknamed “The Loonies” – basically just wants to have fun. 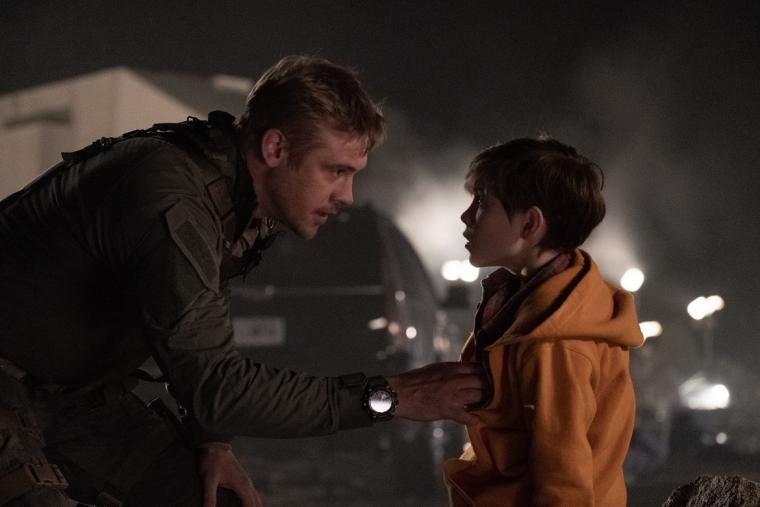 Heaven knows they provide it. It should go without saying that teams of enjoyably mismatched military personnel have been staples of popular American movies – particularly war-themed comedies, dramas, and thrillers – at least since World War II. But while I won't go so far as to call The Predator's crew one of the all-time best, it may be the most wholly enjoyable assemblage of its type since Bill Paxton, Michael Biehn, Lance Henriksen, et al, decorated James Cameron's 1986 Aliens. Composed of Trevante Rhodes, Thomas Jane, Alfie Allen, Augusto Aguilera, and that eternal live wire Keegan-Michael Key, the Loonies come off as 100-percent bonkers, each one proving as willing – eager, even – to bump one another off as to blow an interplanetary interloper to smithereens. Yet their craziness blankets unexpected levels of empathy and decency, and the men are chivalrous, besides; there may be no film scene this year quite as weirdly sweet as the Loonies' preparation for their introduction to Bracket after the woman wakes from her nap. (One of her guardians makes tea; another fashions a miniature unicorn out of aluminum foil.) I hope it won't be a spoiler to say that, after the über-violent finale commences, not everyone in Black's hilarious, oddly humane crew makes it to the end credits. Yet I'd have to go back to Aliens to find second bananas in a sci-fi thriller whose deaths affected me quite so strongly. Sequels may not be in the cards for this ragtag group, but I'm kind of hoping prequels might be.

And if Black and co-screenwriter Fred Dekker can be recruited, I'd be totally on-board with a sequel or two, as well, because hoo-boy is this thing a mess of fun. (Given the not-infrequent disembowelment, beheadings, and limbs ripped from sockets, “mess” is truly the operative word.) While the visual effects are of varying quality and the story is of comic-book simplicity – and no, I don't necessarily mean that as an insult – Black's pacing is superb, and he stages scenes of overt slapstick, such as Bracket's unfortunate tumble from the roof of a bus, with guffaw-inducing skill. There are vibrant character turns by The Handmaid Tale's Yvonne Strahovski and This Is Us' Sterling K. Brown (the latter suggesting we're not even close to sizing up this remarkable actor's gifts), with the Room and Wonder wunderkind Tremblay continuing to display almost preternatural performance skill.

Holbrook, meanwhile, has been a phenomenal supporting player for years, and will hopefully soon ascend to star status given how magnetically he holds the screen here; off the top of my head, I can think of at least a half-dozen A-list talents who don't demonstrate half of Holbrook's intensity, comic timing, and natural charisma. From the cast to the oversize predator dogs to the nearly nonstop delivery of sharp one-liners – I can't believe how long it's taken for one of this series' characters to reference the aliens' resemblance to Whoopi Goldberg – The Predator is a thorough hoot, and my biggest complaint with the film lies in the sound mixing, as it's sometimes difficult to make out the Loonies' insults when they're cracking wise beneath heavy gunfire. Guess I'll eventually have to watch the movie on home video with the subtitles feature on. Against all initial expectation, I actually want to do that. 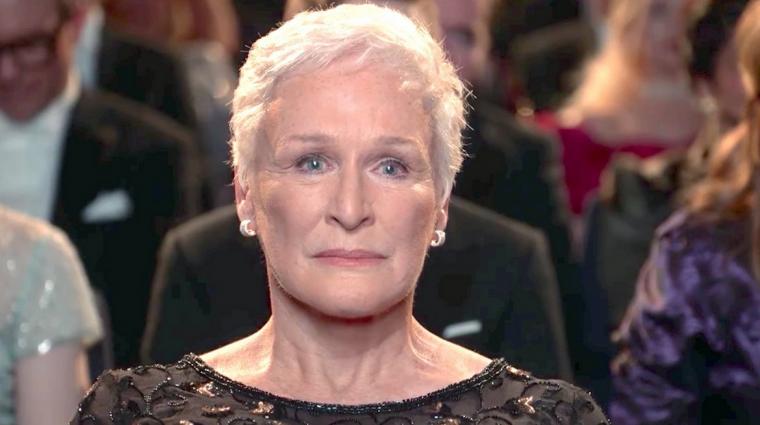 In director Björn Runge's quietly intense marital drama The Wife, currently playing at Iowa City's FilmScene, Glenn Close is like a simmering tea kettle that takes nearly an hour-and-a-half to reach full boil. She's cast here as Joan Castleman, married for 30-odd years to esteemed author Joseph Castleman (Jonathan Pryce), who, in the film's 1992 setting, is the latest recipient of the Nobel Prize for Literature. Joan, who initially seems the type of partner frequently characterized as “the long-suffering wife,” travels with her husband and their son David (Max Irons) to the Nobel ceremony in Stockholm, where the writer is properly fêted, prepped for his meeting with the Swedish king, and hounded by a prospective biographer (Christian Slater). But amidst all this activity, the true fascination of the movie lies in Joan's eyes, because with every minor occurrence – an offhanded comment, a flip bon mot, a lingering look at a female photographer – Joseph's words and actions cause his smiling wife's eyes to gleam with … . What? Envy? Resentment? Loathing? Whatever those looks suggest, their subtext is an unmistakable “I know,” and the staggering thrill of Close's performance comes from her silent declarations making us almost physically ache to know what Joan knows. (It should be said that Runge almost never gives us closeups of Close in this state of non-verbal high dudgeon, as we instead tend to notice it while numerous others are inhabiting a room.)

Not including the tossing of a priceless object out the window of a moving car, nothing that happens in The Wife is altogether unexpected; at my screening, two loudly whispering nearby patrons correctly guessed the movie's easily predicted Big Secret an hour before screenwriter Jane Anderson (adapting Meg Wolitzer's novel) revealed it. Yet whenever its title character is on-screen, Runge's film, in its low-key way, is thunderously exciting. To be sure, Close isn't the whole show, although she easily could have been. Pryce is exceptional as a fatuous windbag who cleaves to his spouse as if for dear life, Irons is heartbreaking as the son forever hidden by his father's long shadow, and Slater brings hints of complexity to a purely conceptual role, his bad-penny biographer conveniently popping up whenever his presence is wanted the least. (Annie Starke and Harry Lloyd are also quite fine as Joan and Joseph in flashback, while the fabulous Elizabeth McGovern momentarily steals the film as a boozy, barely tolerated author who advises young Joan to give up on her dreams.) It's unfathomable, though, that viewers of The Wife will leave the film wanting to talk about anything other than Glenn Close. From her unblinking stares to the verbal explosions that you know in your gut will eventually hit (and that do with shattering effectiveness), the film, stage, and TV legend is a marvel in her strongest movie role in decades, and seems, amusingly, to be actively reigniting memories for longtime fans: her teasing handling of a cigarette from Fatal Attraction; her mischievous “checkmate” twinkle from Dangerous Liaisons. Beyond performing her role beautifully, Close appears to be having enormous fun in The Wife. Intimate chamber drama or not, it's a sense of fun, blessedly, that we're all invited to share.