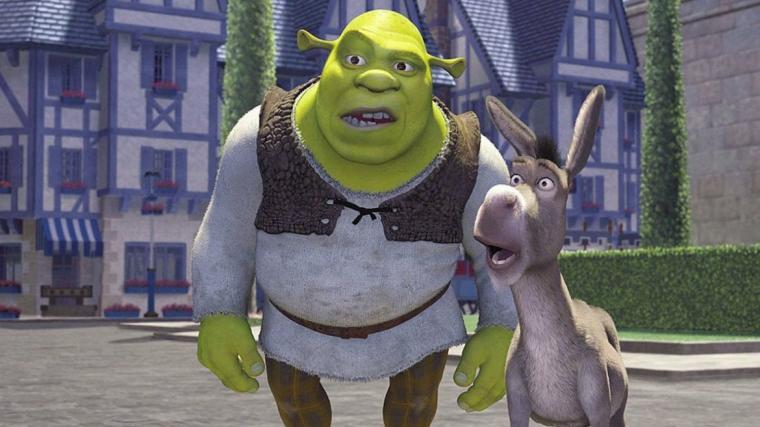 One of the most acclaimed and adored animated features of the 21st century will enjoy a quartet of special 20th-anniversary screenings between April 25 and 29, with Rave Cinemas Davenport 53rd + IMAX hosting big-screen presentations of Shrek, the Dreamworks Animation mega-hit that will reunite family audiences with the titular green ogre, Donkey, Princess Fiona, Lord Farquaad, and scores of other beloved characters.

A computer-animated comedy loosely based on William Steig's 1990 fairytale picture book of the same name, Shrek was directed by Andrew Adamson and Vicky Jenson, and stars Mike Myers, Eddie Murphy, Cameron Diaz, and John Lithgow as the voices of the lead characters. In this parody of other fairytale adaptations, primarily those in the Disney catalog, Myers' ogre Shrek finds his swamp overrun by storybook characters who have been banished by Lithgow's Lord Farquaad, a corrupt leader aspiring to be king. Shrek consequently makes a deal with Farquaad to regain control of his swamp in return for rescuing Diaz's Princess Fiona, whom Farquaad intends to marry, and with the help of the Donkey memorably voiced by Murphy, the ogre embarks on his quest while falling in love with the princess, a woman who is hiding a secret that will change Shrek's life forever.

Shrek premiered at the 2001 Cannes Film Festival, where it competed for the Palme d'Or grand prize, making it the first animated film since 1953's Peter Pan to do so. It was widely praised as an animated film that featured adult-oriented humor and themes while catering to children at the same time, and after its United States release on May 18 of 2001, the film eventually grossed $484.4 million worldwide against a production budget of $60 million. Shrek went on to win the first-ever Academy Award for Best Animated Feature and was also nominated for Best Adapted Screenplay, earning an additional six nominations from the British Academy of Film and Television Arts, one of which led to an award for Best Adapted Screenplay. The film's success helped establish DreamWorks Animation as a prime competitor to Pixar in feature-film computer animation, and three Shrek sequels were subsequently released along with two holiday specials, the spin-off film Puss in Boots, and a Tony Award-winning Broadway musical. In 2020, Shrek was also selected for preservation in the National Film Registry by the Library of Congress as being "culturally, historically, or aesthetically significant," making it the first DreamWorks Animation film and first animated feature not produced or distributed by Disney to earn that honor.

In addition to the hilarious and irreverent Shrek, local audiences will be treated to DreamWorks Animation’s acclaimed animated short film To: Gerard, as well as the trailer to the studio’s forthcoming animated feature Spirit Untamed. Shrek will be screened at Rave Cinemas Davenport 53rd 18 + IMAX at 3 & 7 p.m. on April 25, at 7 p.m. on April 28 and 29, and more information on the presentations are available by visiting Cinemark.com and FathomEvents.com.