The Silence on the Lam: “A Quiet Place Part II” and “Cruella” 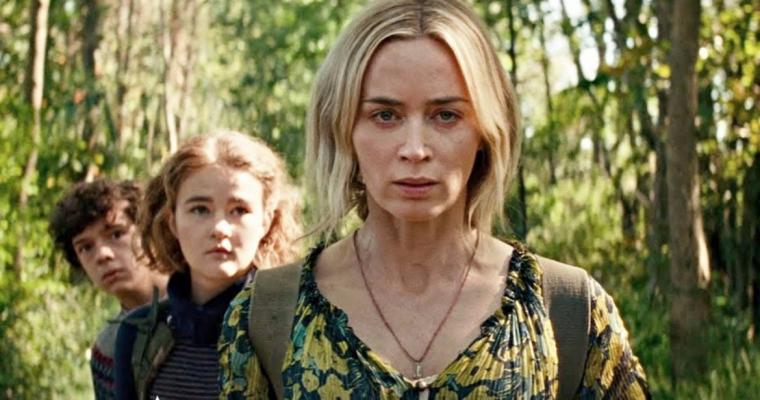 Like me, you may have been missing the sounds of large movie-going crowds laughing together, or sniffling together, or screaming together. Yet it wasn't until my weekend screening of A Quiet Place Part II that I realized what I've really missed at the cineplex over the past 15 months is the sound – or rather, lack thereof – of a sizable audience making no noise at all.

I'll forever relish my favorite instance of stunned silence in a packed auditorium. It was opening day for 2008's The Dark Knight, and Heath Ledger's Joker was terrorizing a tied-up Batman impersonator (“Look! At! Me!!!”), and after the clown laughed maniacally into his camcorder and left the rest of the torture to our imaginations, Christopher Nolan cut to a serene nighttime pan above the streets of Gotham City. Our collective hush during that shot was chilling – What did we just see?! Just how crazy is that guy?! – but also exhilarating; you could sense every single one of us holding our breath for fear of breaking the moment's taut spell. I'd argue that roughly 75 percent of A Quiet Place Part II works on a similar level. Writer/director John Krasinski's follow-up to his 2018 smash (the original having been co-written by Bettendorf natives and Bluebox Films pioneers Scott Beck and Bryan Woods, who retain a “characters created by” credit) is louder than its predecessor, and the novelty is understandably diminished. It should also go without saying that theaters now aren't nearly as full as they were three years ago. But this continuation is still an intoxicating pleasure, even when – maybe especially when – the tension is almost unbearable.

Serving as both sequel and mini-prequel, Part II opens on day one of the attack by the Quiet Place monsters – those shrieking, hopping, H.R. Giger-y creatures who are blind as bats but whose awareness of sound is so acute that you feel they'd eagerly leap off-screen and on top of you if you made too much of a racket munching your popcorn. Sporting huge fangs they don't use and murderous pincer claws they most definitely do, the aliens descend from the sky during a Little League game, and Krasinski foreshadows his eventual narrative design by separating our heroic Abbott family from the start: Mom Evelyn (Emily Blunt) and sons Marcus (Noah Jupe) and Beau (Dean Woodward) try to escape the ambush in one car; dad Lee (Krasinski) and daughter Regan (Millicent Simmonds) in another. Even though the sequence's finest shot – Evelyn racing her vehicle backward to avoid an oncoming, driver-less bus – was given away in the film's trailers, it's a truly hair-raising prelude, and one made more unnerving by the occasional shifts to Regan's perspective, given that the young teen, like Simmonds herself, is deaf, and consequently experiences the destruction and carnage with no accompanying clamor. It's in moments such as these that, if your audience is anything like mine was, the only sound you'll hear from the crowd will come if someone unwisely drops a pin.

We then fast-forward to day 474, mere minutes after the first Quiet Place's finale, where (three-year-old Spoiler Alert!) Lee and Beau are no longer in the picture but Evelyn's newborn son is. And with the established “rules” clearly in place – the monsters will kill you if you make noise, yet they're paralyzed by particularly high frequencies – the rest of Krasinski's movie has the Abbotts working independently to keep the family whole: Regan and grieving neighbor Emmett (Cillian Murphy) investigate a potential safe harbor; Evelyn ventures off in search of medical supplies; and Marcus, badly wounded by a bear trap, tends to a baby brother prone to crying fits. (Silly infant.) In terms of plot, there isn't much. But Krasinski, his remarkable actors, and his exceptional design team do an awful lot with the little they're given. (Originally scheduled for last year April, the film's delayed release also winds up working in its favor, considering the added poignancy and queasy heartbreak that now accompany the image of a face-masked baby quarantined in a trunk.)

Truth be told, and despite one “Boo!” moment involving Regan that caused me to audibly gasp, I didn't find A Quiet Place Part II terribly scary. The skirmishes with the creatures are effective yet repetitive, and we really aren't given any fresh flips on the original material; there aren't, for example, any baby beasties – or a Queen Mother à la Aliens – roaming about to keep us on our toes. Yet what the movie lacks in fright is more than made up for in intensity, which is undoubtedly what kept my audience so blessedly silent. Space creatures may be wreaking havoc, but I was practically frozen stiff watching Evelyn's attempts to calm her traumatized son, and Regan inching her way down a staircase (yes, that wretched upended nail in the basement makes a return appearance), and, most harrowing of all, Marcus' inner struggle as he weighed whether it was wiser to share oxygen with his days-old brother or keep it all for himself. While I didn't scream at Krasinski's outing, Krasinski's exquisite building and sustaining of tension kept me a nervous wreck. I also got teary on several occasions, because Blunt, Murphy, and especially Simmonds and Jupe were playing their panic and familial resolution with astoundingly believable force; the plotting here may be mostly inconsequential, but the emotional stakes couldn't possibly feel higher.

Running a just-right 97 minutes, and boasting a supremely sinister soundscape and an ending as surprisingly yet perfectly clipped as the original's, the masterfully edited A Quiet Place Part II leaves you stoked for a Part III while remaining a free-standing great time – so much of one, in fact, that it wasn't until days after viewing the movie that I realized, sword-like pincers aside, how fundamentally weak its aliens are. In the first movie, we discovered that they hated fire and high frequencies. This time, we learn they're not big fans of water. Hmm … creatures averse to high temperatures and swimming and radios played extra-loud … . Holy crap. The inhuman villains are me. 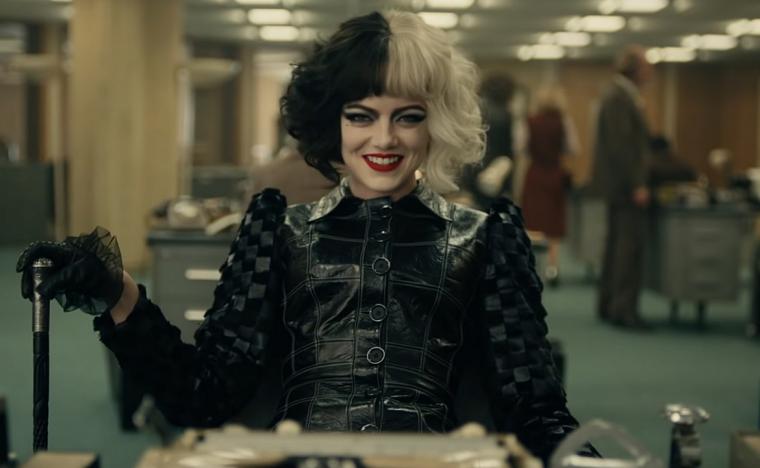 While perusing reviews for Disney's Cruella, a deeply unnecessary origin story for the hateful puppy skinner of 101 Dalmatians, I noticed that most critiques had one specific question in common: Who, exactly, is this hot mess for?

It's traditional Disney empowerment, but the woman it's empowering is perhaps the most perversely loathsome adversary in the studio's entire animated canon. It's unmistakable blockbuster product, yet helmed by the director of I, Tonya – a guy who, at least for this project, has evidently been studying his Scorsese. There's a lot of fast-paced slapstick, but the movie lasts an obscenely protracted 134 minutes. There are CGI dogs in the vein of last year's Call of the Wild, but they're employed to knock the movie's most empathetic figure off a cliff. It boasts an easily digestible storyline for grade-schoolers, yet the song selections trace the arc from British-invasion '60s to punk '80s, and there are equivalent visual cues in the costuming, as though you're watching Phantom Thread morph into Sid & Nancy. An Oscar-winning Emma plays the title character, but the more interesting and entertaining character is played by an older Oscar-winning Emma. So I guess the answer to “Who is this for?” is that it's for anyone who ever wanted to see a PG-13 Joker with faux animals and a chubby second-banana henchman while listening to the Rolling Stones in daring haute couture after a binge marathon of Easy A, Howards End, GoodFellas, and all of Disney's live-action reboots from the last 10 years. Both of you should be delighted.

That said, for a film that almost goes out of its way to make sure no viewer leaves satisfied, I didn't completely dislike director Craig Gillespie's deeply weird achievement. True, the de rigueur origin-story stuff is beyond banal, and the narrative absolutely, pointlessly shreds whatever you previously knew about Cruella de Vil. (It's bad enough that this one, in 2021, isn't allowed to carry her iconic cigarette holder, but she doesn't even hate dogs!) Yet the production design is sensational and Jenny Beavan's costumes consistently astonishing; I actually laughed out loud at her de Vil frocks that covered a stretch limo and poured from the rear of a garbage truck. Although there are worthless roles for Mark Strong as an unctuous assistant and Kirby Howell-Baptiste as a tabloid photographer, Joel Fry (playing Cruella's lovelorn mate Jasper) and John McCrea (playing Cruella's sweetly bitchy accomplice Artie) give admirably sustained performances, while Paul Walter Hauser, for those who like this sort of thing, enacts an incompetent boob in the precise Paul Walter Hauser manner. 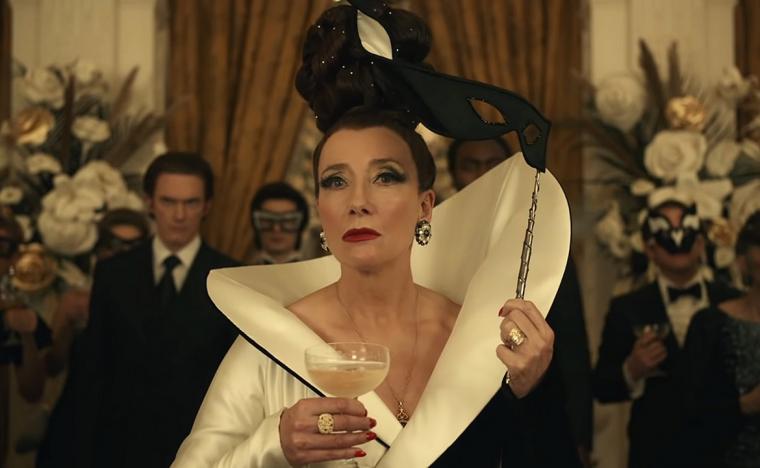 Emma Stone has to portray too many competing sides to her title character to ever be convincing – she seems to be going for Arthur Fleck while the script is demanding a Disney-fied Eve Harrington – but she's fun to watch, even if the performer did much the same thing way better in The Favourite. And as Cruella's fashionista nemesis “The Baroness,” Emma Thompson is utter brilliance, walking the fine line between subtlety and cartoonishness with such surgical The Devil Wears Prada wittiness that her every appearance and utterance feels like a gift from the acting gods. Watching the microscopic alterations in Thompson's facial expressions is practically a night's entertainment in itself, though I'll admit that nothing in her portrayal made me laugh harder than the sight of the Baroness finishing her boxed lunch and, from the back seat of her moving car, casually tossing the contents out the window.

Beyond Thompson's objectively hilarious bits and Hauser's monkeyshines, however, I have to ask: What, among all this, is there for the kids? I hate to sound like Ned Flanders' deceased wife here. (“Won't somebody please think of the children?!?”). But while Gillespie and his quintet of screenwriters and “story by” contributors – one of them being Devil Wears Prada screenwriter Aline Brosh McKenna – are making things at least palatable for the grown-ups, it's nearly impossible to determine what a child might make of all this retro, allusion-filled strangeness and nastiness. Based on the relatively well-populated weekend screening I attended, I'm guessing not much. Over two hours and 15 minutes, the only laughs I heard came from adults, while the young-'uns appeared to need, or perhaps merely take, more potty breaks than they usually do during Disney flicks. And you know those mechanisms that allow you to lean your seat back at the Davenport cineplex? The youths I was surrounded by loved those, filling the auditorium with a continual, motorized hum of back-and-forth motion to the point that I thought I might have a seizure.

Kids, of course, will be kids. But I'll argue that if Cruella were actually working for them – which a 101 Dalmatians offshoot should, right? – they'd have been too engrossed in the film to busy themselves with the seating's built-in toy. While Gillespie's hopelessly confused offering may provide enjoyable distraction for adults, I'm thinking it's just about the worst cinematic babysitter imaginable.