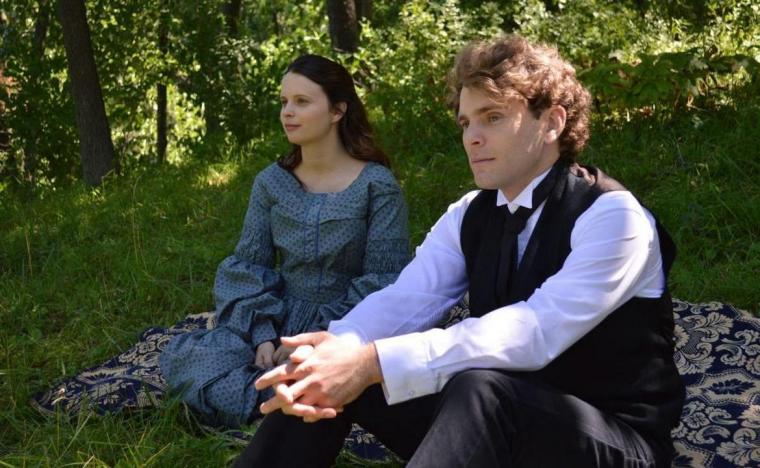 Jessica Taylor and Thomas Alan Taylor in "Sons & Daughters of Thunder" at the Putnam Museum & Science Center -- March 16 and 17.

In Sons & Daughters of Thunder's early-19th-Century setting, Christianity is at a crossroads, with fellows in the faith taking sides for and against the South’s institution of slavery based on their interpretations of the scriptures. If, however, polite discussion about abolishing slavery was considered inappropriate in Northern states, then 18 days of public, student-sponsored debates on the divisive subject at Lane Seminary in Cincinnati, Ohio, were positively scandalous. Organized by Theodore Weld, one of the architects of the abolitionist movement, the shocking oratory sparked intense controversy and awakened a young Harriet Beecher to the horrors of slavery. And when school trustees slapped a gag order on the “Lane Rebels,” most of the students left the school in collective protest. Inspired by the debates and her firsthand observations of slavery across the Ohio River, Beecher went on to write the classic novel Uncle Tom’s Cabin – a work described by President Abraham Lincoln as the book that started the Civil War – and Sons & Daughters of Thunder tells the unforgettable true story of the beginning of slavery's end in America.

Based on the play by Earlene Hawley and Curtis Heeter, the film is the latest by Fourth Wall Films' Mid-America Emmy Award nominees Kelly and Tammy Rundle, whole previous works include such documentaries as Villisca: Living with a Mystery, Lost Nation: The Ioway, Country School: One Room, Movie Star: The Secret Lives of Jean Seberg, and River to River: Iowa's Forgotten Highway 6. Principal photography for the film took place at several historic sites in the Quad Cities and surrounding areas, including the Karpeles Manuscript Library Museum, Augustana College’s House on the Hill, the Jenny Lind Chapel in Andover, and the Dillon Home Museum in Sterling, Illinois. Filming also took place at the Harriet Beecher Stowe House in Cincinnati, Ohio – the only remaining structure on what was Lane Seminary grounds – and Sons & Daughters of Thunder boasts an original score by William Campbell, the composer and St. Ambrose University professor behind the Academy Award-nominated documentary Lifeboat,

Sons & Daughters of Thunder will receive its local premiere at the Putnam Musuem & Science Center at 6:30 p.m. on March 16, with another screening scheduled for 3 p.m. on March 17. Admission is $10, with tickets available by calling (563)324-1933 or visiting Putnam.org, and more information on the film is available by visiting LaneRebelsMovie.com.