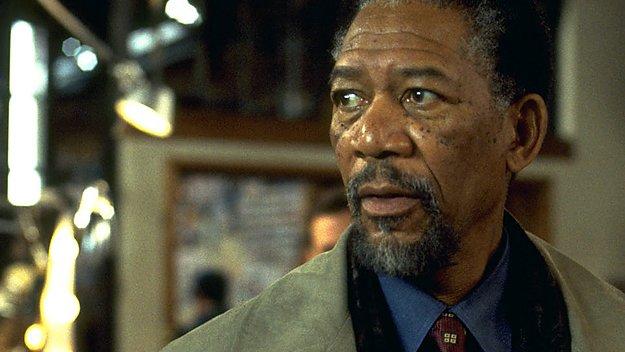 Morgan Freeman in Along Came a Spider

ALONG CAME A SPIDER - Lee Tamahori's thriller doesn't feature a single scene that works on a realistic level; thank goodness we gave up looking for realism in Hollywood flicks ages ago. If you can shut off your brain and ignore every logical thought that enters it, this Kiss the Girls prequel can be enjoyed enormously on its own ridiculous terms, and Morgan Freeman's astonishing blend of dignity, authority, and concentration gives the film more weight than it deserves. He might be the best thing to ever happen to a silly action-thriller, and he leads a fine cast of snarky character actors - Monica Potter, Michael Wincott, Jay O. Sanders, Dylan Baker, and Michael Moriarty among them - who might or might not turn out to be creeps. The film is a miasma of thriller clichés, yes, but it's unerringly paced and a lot of fun nonetheless.

BLOW - A bit of a stiff. Though its storyline is epic - it tells the tale of George Jung, who was once responsible for 85 percent of the cocaine that made it to America in the 1970s and '80s - the director, Ted Demme, isn't yet the artist that the movie demands. His scenes are flabby and all have the same rhythm, and he doesn't dramatize the ironic possibilities in the material; Jung is constantly sinned against by friends and family, totally unaware of how much of a sinner he is himself. Johnny Depp is somnambulistic and one-dimensional in the lead role, and while Paul Reubens and Penelope Cruz add some fun, they don't have the good lines they'd need to truly catch fire. The film is sometimes engrossing and the presentation is acceptable, but we've seen this tale before, and told with a lot more energy.

BRIDGET JONES'S DIARY - A fascinating leading character can atone for a lot of problems in a movie, and there might be no better proof of this thesis than this adaptation of Helen Fielding's bestseller. Played pitch-perfectly by Renée Zellweger, Bridget is a beautifully realistic creation, completely endearing and funny, who occasionally reaches classic levels of comedic self-pity, particularly in the film's hilarious opening-credits sequence. Zellweger outdoes even her acclaimed performances as Dorothy Boyd and Nurse Betty, and Hugh Grant and Colin Firth are terrific as the men in her life; though the film often treats Bridget cruelly and its built-in predictability is a bummer, the fun you have with the characters outweighs your problems with the material.

THE BROTHERS - A good-and-bad movie in which the good parts far surpass the bad. Four long-term pals examine their lives and their relationships with women. That's about it, plot-wise, but writer-director Gary Hardwick comes through with some truly hysterical dialogue, and it's the rare male-oriented buddy flick that gives its female actors (the best are Gabrielle Union and the vibrant Jenifer Lewis) plenty of breathing room. Hardwick's characters are hardly original, and the movie never really amounts to much, but it's one of the season's few pleasant surprises, and leading man Morris Chestnut anchors the film with an impressive combination of understatement, humor, and sexiness.

CHOCOLAT - Despite its five Academy Award nominations and Miramax's shameless publicity push, Lasse Hallstrom's comedy is just like the candy treat of its title: smooth, tasty, and containing absolutely nothing of nutritional value. The beyond-yummy cast features Juliette Binoche, Judi Dench, Lena Olin, Johnny Depp, Alfred Molina, Carrie-Anne Moss, and Hugh O'Conor in a film that its creators would like you to believe is a tough-minded look at the evils of bigotry and the need for tolerance, but come on: It's just a predictable and utterly charming excuse to look at pretty scenery and enjoy the hamminess of the performers. Once people's anger over its being an undeserved Best Picture nominee subsides, it'll be fondly remembered as a model of lighthearted Hollywood fare.

CROUCHING TIGER, HIDDEN DRAGON - The most successful foreign-language film ever released in this country, and with good reason: It's magnificent. Ang Lee's breathtaking martial-arts romance/drama is like a Chinese Titantic with a better script - a thrilling, intoxicating, heady ride that makes you feel as uncontrollably happy as a kid seeing a stage version of Peter Pan for the first time. Chow Yun-Fat and Michelle Yeoh are the warriors and Zhang Ziyi is the deliriously duplicitous baddie, but it's Lee's movie all the way - he has made a popular blockbuster that stays within the limits of its genres and transcends them simultaneously. This year's Oscar winner for Best Foreign Film, Cinematography, Art Direction, and Original Score, it's one to miss (especially on the big screen) at your peril.

DOWN TO EARTH - There's nothing all that wrong with remaking a harmless piece of fluff for further profit (this one puts Chris Rock in the Warren Beatty role from 1978's Heaven Cat Wait), but once you get the gag, there's nothing much right with it, either. Chris and Paul Weitz's direction is as slack and visually dreary as it was in their American Pie, and while Rock occasionally comes through with his crack timing, the supporting cast - Chazz Palminteri, Greg Germann, Jennifer Coolidge, and Frankie Faison in particular - isn't very impressive. To anyone with even a vague recollection of Heaven Can Wait, not to mention its predecessor, 1941's Here Comes Mr. Jordan, only one question will come to mind: Why did they bother?

ENEMY AT THE GATES - Jean-Jacques Annaud's period drama compromises its World War II setting and exquisite production values with two exceedingly stupid plotlines - a half-baked love triangle (featuring Jude Law, Joseph Fiennes, and Rachel Weisz) that's all romantic hogwash, and a dramatically hokey cat-and-mouse game between snipers Law and Ed Harris. The film's epic-scaled battles between the Germans and the Russians feel secondary to the romantic and egocentric battles between the good-looking performers, and it borders on the offensive (as does James Horner's bombastic score). Filled with second- and third-rate situations and dialogue, this handsomely designed film is continually trite and feels as long as an actual war.

HEARTBREAKERS - Amusing in spurts and modestly enjoyable, but stuck with a soggy center - the love/hate battle of wills between mother and daughter grifters (Sigourney Weaver and Jennifer Love Hewitt). Not only do Weaver and Hewitt not look like relations, they don't feel like relations; their verbal duels don't have any snap, and it appears that they've only recently been introduced. Though Weaver has a great bit singing a deep-chested, heavily accented version of "Back in the U.S.S.R.," both she and Hewitt are upstaged by a terrific group of second bananas: Nora Dunn, Ray Liotta, and a pricelessly funny Gene Hackman (as a repulsive, chain-smoking tobacco mogul), all of whom are more entertaining than the leads.

JOE DIRT - Not nearly as bad as you'd think, but yeah, still pretty terrible. In the title role of the dumb-as-a-stick, white-trash janitor searching for his long-lost family, David Spade comes through with a lot of hilarious line readings and tones down his usual smarminess; he gives the picture whatever edge it has. That edge, though, doesn't extend to the plot, which makes the fool mistake of having Joe Dirt appear to be a character worthy of our sympathy, for God's sake. (He's scarred after being abandoned by his folks at the Grand Canyon.) The lack of any filmmaking finesse hurts, too, as does the total waste of Christopher Walken's comedic talents, but at least Spade, for once, shows that he just might be able to carry a picture.

JOSIE AND THE PUSSYCATS - Godawful. Unfunny and amateurish throughout, this teen-oriented rock comedy even manages to waste the natural charisma of Parker Posey, and it takes a really bad flick to pull that off. It's hardly worth discussing, except to note that its plotline was better executed in a recent Simpsons episode (that was a good hour shorter, to boot), and it makes the self-congratulatory debauchery of something like Charlie's Angels look like the model of form and content. Thankfully, even today's undemanding teen audience is able to smell rotten goods when they see it; the film has already all but left a theatre near you.

THE MEXICAN - A nearly endless series of clichés and rote action-comedy sequences; thank God Julia Roberts and James Gandolfini are on hand, partnering each other joyfully, to give this sorry mess some inspiration. Unfortunately, the other half of the film is devoted to Brad Pitt, again playing Good-Looking Movie Star instead of a character, and again coming off as a handsome, utterly bland cipher. Director Gore Verbinski doesn't show much talent for staging or visual design, and with all the supposed "comedy" in the script there isn't a laugh to be had. It has still, somewhat shockingly, proven to be a modest box-office hit; even when she's stuck in a demeaning role in subpar material, audiences can't seem to get enough of Julia.

SOMEONE LIKE YOU - It just figures: You wait patiently for Ashley Judd to get out of her action-stud-muffinette phase and land the lead in a romantic comedy, and when she does, it's in this witless and charmless piece of piffle. If you've never before felt the head-swimming rush of déjà vu, I heartily recommend catching the film; even if you haven't yet seen it, you've seen it. While X-Men's Hugh Jackman gives the star appropriate smolder, Judd herself seems to be channeling the worst elements of Sandra Bullock and comes off as rather graceless, matching the anemic script for sheer desperation. With Greg Kinnear, playing a seemingly nice guy who's actually a bastard. What a shock.

SPY KIDS - Robert Rodriguez's family action flick is all special effects and practically no story, which is apparently enough, in our current movie climate, to turn it into a sort of classic; visually busy emptiness seems to be the new standard of excellence for today's youth. Still, it's not bad. Rodriguez keeps his scenes moving at a peppy clip, his work with child stars Alexa Vega and Daryl Sabara is outstanding, and the effects have a gee-whiz infectiousness; it almost doesn't matter that nothing is really at stake in the movie and it features Alan Cummin's umpteenth performance as a fey, giggly sprite. It has enough visual invention to make up for lack of invention in other areas, and kids could certainly find worse movies to turn into hits.

TRAFFIC - Your attitudes toward the drug-abuse crisis are both verified and constantly changing throughout this astonishing work, probably the year 2000's absolute finest cinematic achievement (though Best Picture was the one Oscar it lost; it did pick up awards for screenplay adaptation, film editing, Steven Soderbergh's direction, and Best Supporting Actor Benicio Del Toro). It's something increasingly rare in modern films: a large-scale epic with a human pulse, in which every character and nuance is sharply defined. The best in Soderbergh's already-amazing body of work, it features, in addition to the brilliant Del Toro, sensational work from the likes of Catherine Zeta-Jones, Don Cheadle, Luis Guzman, Erika Christiansen, and many others. Thrillingly, the film's box office has matched its critical success; this is one for the ages.