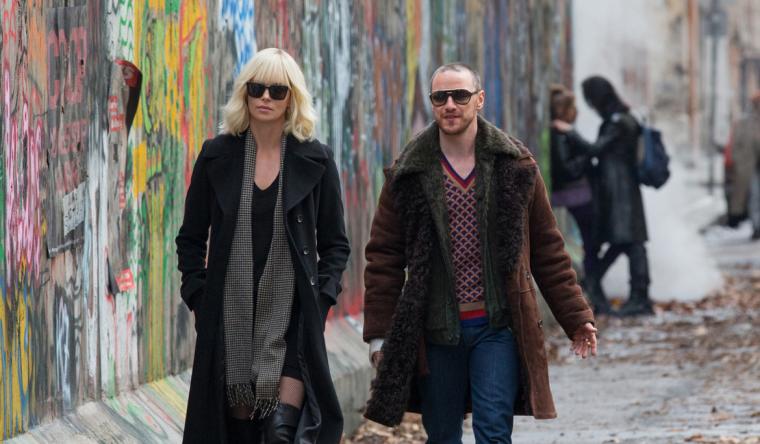 Domestic box office may be comparatively down and aging franchises (and franchise stars) may be showing their whiskers, but if 2017’s movie summer is remembered for anything else, it may be for its habit of turning showcase action sequences into retro music videos. Edgar Wright’s Baby Driver is overflowing with scenes edited in sync with its accompanying hit parade, none more memorable than the wild “Tequila” shoot-out that currently stands as the film’s year’s best musical number. And in director David Leitch’s violent spy thriller Atomic Blonde – set in Europe right before the 1989 fall of the Berlin Wall – there’s not only a vicious beating scored to “99 Luftballoons,” but a brutal melee involving Charlize Theron, gun-toting goons, and a length of rope that’s choreographed, brilliantly, to George Michael’s “Father Figure.” If that Inconvenient Truth sequel finds Al Gore showing slides of melting icebergs to the tune of Asia’s “Heat of the Moment,” we’ll definitely be in the midst of a trend.

Atomic Blonde’s bevy of period-appropriate tunes – everything from “Under Pressure” to “Voices Carry” to “Hungry Like the Wolf” – is the third-best reason to see this sleek, agreeably silly work adapted from Antony Johnston’s graphic-novel series The Coldest City. With Theron’s British master spy Lorraine Broughton attempting to retrieve a list of undercover operatives, protect a nebbish informant (Eddie Marsan), and ferret out a double agent in the MI6 ranks, the soundtrack’s familiar pop and synth songs help keep the pace zippy and the overall spirit light, and remind us that we shouldn’t be taking any of this seriously. (Not that anyone really could, as screenwriter Kurt Johnstad’s contributions include a sublime David Hasselhoff gag and the image of a guy with a knife stuck in that hard-to-reach part of the back that you can never properly scratch; eventually, he gives up and leaves it there.)

The second-best reason to see it is the hand-to-hand combat, which is generally savage and draining here, but so excitingly well-staged that my jaw frequently dropped less in shock than admiration. Former stuntman and frequent stunt coordinator Leitch was a co-director for the original John Wick, and Atomic Blonde’s numerous fights are presented with a similar respect for the scenes’ grueling physicality, for the characters’ spatial relationships, and for the camera’s eye – and, consequently, for the audience. 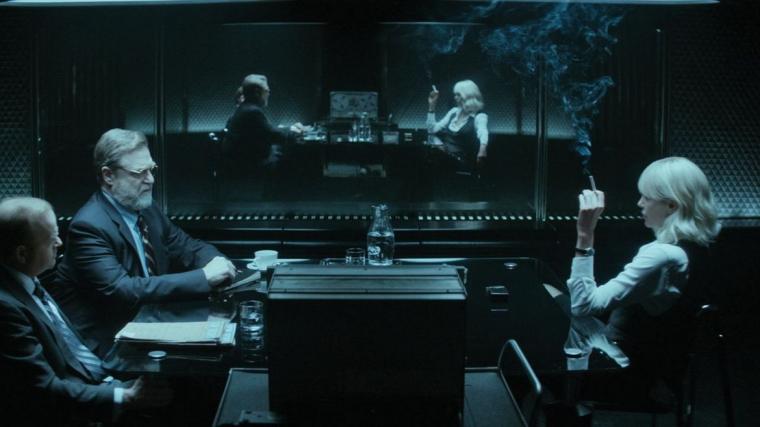 Instead of more traditionally hyper-edited encounters that only provide quick flashes of limbs, Leitch routinely shows us entire bodies in whirring, retaliatory motion, and as improbable as the up-close-and-personal battles may be, our awareness and understanding of the scenes’ geography never makes them seem impossible. In a particularly stunning sequence disguised to look like a continuous take, Lorraine, in an office building, takes on a pair of would-be assassins on one floor, then two more killers on the floor below, then a slew more on the floor below that, and it’s like watching the apocalyptic climax to Children of Men; Leitch’s choreographic bravura is so assured that you want to applaud. (One of the film’s sharper in-jokes finds Lorraine in hot water during a screening of Andrei Tarkovsky’s sci-fi epic Stalker, because few movies have resembled the Tarkovsky oeuvre less than Atomic Blonde.)

As for the best reason to see Leitch’s self-consciously twisty yet satisfying outing, the fact that it’s Charlize Theron will likely only come as a surprise if you missed Mad Max: Fury Road or Snow White & the Huntsman ... or anything, really, that lets the Oscar winner unleash the full force of her screen presence. The better to deceive those around her (and us), we’re given precious little backstory for Lorraine. As usual, though, Theron fills in her character’s blanks with those astounding eyes that appear to simultaneously reveal everything and nothing; we sense the pain and horror and bitter resolve of the spy’s past, but she’ll be damned before she shows you, or tells you, exactly what it is that makes her tick.

Physically, Theron is glorious to watch in Atomic Blonde, whether emerging from a bathtub filled with ice water (and promptly pouring herself an iced vodka) or dispatching a quartet of henchman through fists, feet, and sharp knives to the neck. But she’s somehow just as dynamic in her quiet interrogations with John Goodman and Toby Jones, and her come-hither glances with Sofia Boutella, and her ability to out-act James McAvoy – who’s in full, feral Filth mode here – with one perfectly expressed sigh suggesting just how frequently exhausting his hamminess is. As Lorraine says early in the film, “Talents can be overrated.” Not in Theron’s case, they can’t.

As of this writing, The Emoji Movie sits with a 6-percent “freshness” rating on Rotten Tomatoes, a score of nine (out of 100) on Metacritic, and a 1.5 (out of 10) rating on the Internet Movie Database, its current placement as the 24th-worst film of all time sandwiching it between soft-core gay porn and a 1999 Italian cartoon about the Titanic disaster. Obviously, writer/director Tony Leondis’ new animated comedy about the secret life of text-message figures – an Inside Out with all of its greatness surgically removed – is its own kind of titanic disaster. So rather than pile on, let me just say that James Corden has some winning deliveries as a hypochondriacal Hi-5, Maya Rudolph provides a few smiles as sadistically grinning upper management, and a scene set within the Instagram app yielded some lovely visuals. Otherwise, just like its hero voiced by a presumably anesthetized T.J. Miller, the cynical, witless, deathly boring Emoji Movie is capitalized Meh, although that poop-swirl emoji would’ve been a fitting equivalent, too.