Spy vs. Spite: “The Courier” and “City of Lies” 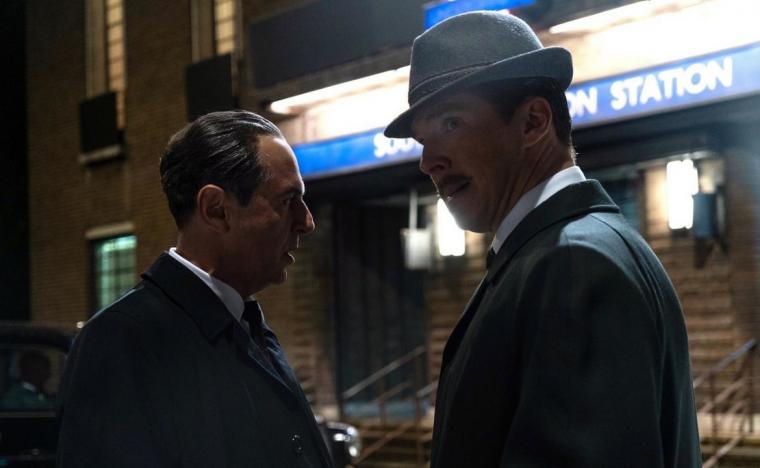 Merab Ninidze and Benedict Cumberbatch in The Courier

Two new cineplex releases this past weekend opened with words that frequently inspire ennui in moviegoers everywhere: “Based on a true story.” Yet while both dramatic thrillers – The Courier and City of Lies – are overly earnest and expository in ways those five-word preambles usually imply, their true (or more precisely true-ish) tales are gripping nonetheless, and the performers carry you through the occasional dead spots. One of those films is mostly tight and polished. The other is mostly sprawling and messy. And I mostly enjoyed them both … but kinda preferred the messy one.

Mining cinematic terrain previously explored by Spielberg in 2015's Bridge of Spies, the Cold War-era period piece The Courier casts Benedict Cumberbatch as Greville Wynne, a scientific-machinery salesman who, with his nebbishy bearing and sad little mustache, looks and behaves in ways you'd expect from a middle-aged family man named Greville. His contentedly humdrum life, however, is upended when Wynne is approached by operatives from MI6 and the CIA (Angus Wright's Dickie Franks and Rachel Brosnahan's Emily Donovan, respectively), who want to recruit the civilian for a purportedly safe and simple bit of espionage. In the hopes of preventing what he sees as inevitable nuclear conflict between nations, specifically the Cuban Missile Crisis of 1962, Soviet officer Oleg Penkovsky (Merab Ninidze) has made overtures to the British and the American agencies suggesting his willingness to supply evidence of his country's expanding arsenal. Procuring said evidence through traditional means, though, is a non-starter, as any trained spy would be quickly identified as such by the KGB. Yet who would ever suspect a Greville? After some dillying and dallying, Wynne reluctantly agrees to act as courier between Penkovsky and his MI6/CIA beneficiaries, and while discovering that he actually really digs his amateur-spy escapades, he unexpectedly develops a close friendship with Oleg while his duties grow more complex and dangerous. So it's Bridge of Spies, but a half-hour shorter. It's Abridged of Spies. 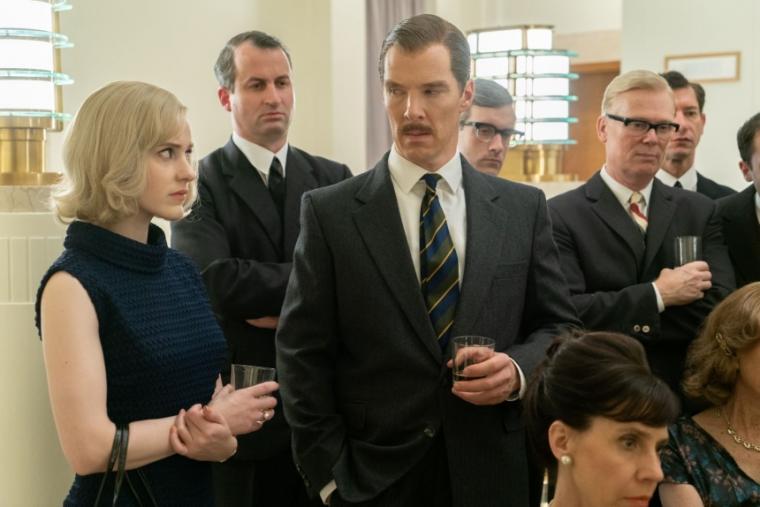 While I get their novelistic appeal, I'm generally not crazy about European spy thrillers of this type – all those gray skies and gray suits and gray moods. But while the movie's color palette remains predictable, The Courier, for much of its length, coasts along on unexpected supplies of lightness, charm, and humor. (Wynne's fondness for drinking – a habit the man is shocked to learn that MI6 and the CIA know about – turns out to be a significant plus for his new profession.) Until events grow rather harrowing in the final act, composer Abel Korzeniowski's score is propulsive yet playful, and Cumberbatch scores a number of good-natured chuckles by barely containing Wynne's nervous joy in his clandestine operations; this unremarkable nerd (Wynne, not Cumberbatch) appears tickled pink by the chance to play James Bond. There's also a ticklishness to the genre signposts – hidden cameras, furtively scrawled chalk marks, radios turned up to full volume to prevent KGB eavesdropping – that augment director Dominic Cooke's old-school filmmaking. Like the Spielberg picture, this sharp-minded entertainment is a movie you could safely take your grandpa to, even if he did wind up napping during its somewhat repetitive midsection.

Yet while Cumberbatch is terrific and Ninidze proves quite moving as the rare Cold War Soviet you'd have no qualms about hugging, Cooke's outing is nearly stolen by its two most prominent females – a huge surprise considering the film's unmistakably male-centric nature. Brosnahan, whose years as The Marvelous Mrs. Maisel have made it impossible not to think of the 1960s when watching her, is sensible yet spirited, her CIA agent calming Wynne's fears with rational tough talk and casually taking control of rooms without a hint of grandstanding. This Emily Donovan has no time for, or interest in, serving as a feminist icon when simply being a professional gets the job done faster.

And Jessie Buckley plays the de rigueur Fretful Spouse figure with more sardonic wit and energy – and a lot more anger – than we're used to seeing from this customary stereotype. Long before we learn the precise reason for her suspicions, Buckley's Sheila Wynne regards Greville with affection but also caginess and mild distrust, and those caveats only intensify as her husband burrows ever deeper into his secret activities; Sheila knows that whatever out-of-character fun Greville is having, it's going to come at a price. Handsomely designed and effective though it is, The Courier is hardly a pulse-quickening thriller. But thankfully, it has Buckley on hand to give it a pulse. 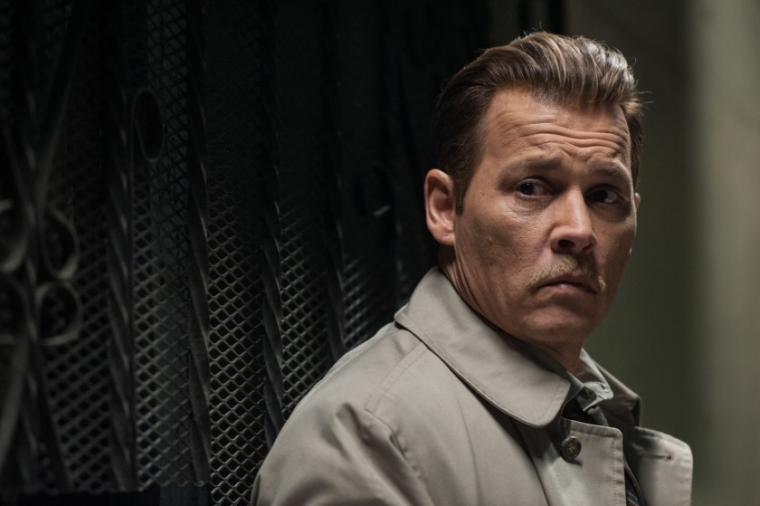 To my mind, I had plenty of solid reasons for being leery about City of Lies. For one thing, production on the film wrapped nearly four years ago, and a delayed release of 46 months is rarely a sign of quality. For another, director Brad Furman's and screenwriter Christian Contreras' saga was yet another exploration into the 1996 and '97 murders of Tupac Shakur and The Notorious B.I.G., subjects that have already been covered in myriad film and TV documentaries and features over the years. And not only did the prospect of City of Lies mean spending nearly two hours in the now-questionable company of Johnny Depp, but a Johnny Depp whose numerous flashback sequences would find him playing a 31-year-old, a sight that promised to be even more outré than the actor in Willy Wonka or Mad Hatter attire. (Oddly, Depp occasionally looks older as the 31-year-old version of his character than he does as the 51-year-old version.) Yet by the end of this formulaic but unexpectedly resonant procedural, my initial hesitancy proved largely unfounded, because what's on the screen is actually an expansive, thrillingly paranoid snake-eating-its-tail drama suffused with bristling rage and boasting a tremendous supporting cast – JFK with a hip-hop beat.

The presentation is familiar from any number of “based on a true story” flicks, with Forest Whitaker's dogged journalist Jack Jackson interrogating Depp's retired LAPD detective Russell Poole about his investigation into the rap artists' killings, and that interrogation inevitably leading to flashbacks of Poole's early involvement in the cases. Despite having no real character to play, Whitaker, with his imploring expressions and emotional transparency, is admirable. But it's Depp, in what is easily his finest film portrayal since 2015's Black Mass, who's the standout here. The actor may not be remotely convincing as a 31-year-old, but Poole's simmering frustration at the runaround he gets from his fellow officers, combined with his palpable sense of moral decency, gives weight to the detective's escalating fury, and makes you understand why the case would continue to haunt Poole for nearly 20 years. He's not merely ashamed and sickened by what he views as the sordid corruption of the LAPD; Poole is actively pissed, and even in his lighter moments, Depp's eyes blaze with a righteous anger that only the cop's cool professionalism manages to keep in check. All told, this might be the most damning indictment of the Los Angeles police force since L.A. Confidential (or, at the very least, since the epic documentary O.J.: Made in America), and Furman has recruited a fantastic ensemble of character actors – Shea Whigham, Toby Huss, Neil Brown Jr., Xander Berkeley, Peter Greene, and the intensely magnetic Shamier Anderson among them – to put the force in this movie's law enforcement. City of Lies is too prosaic, and its dialogue too flat, to be considered a great work. Yet it's still a vibrant and incendiary one, and even delivers a measure of grace in the appearance of Voletta Wallace, the real-life mom of the murdered Christopher “Notorious B.I.G.” Wallace. Just because a story has been told dozens of times doesn't mean it's not worth re-telling.