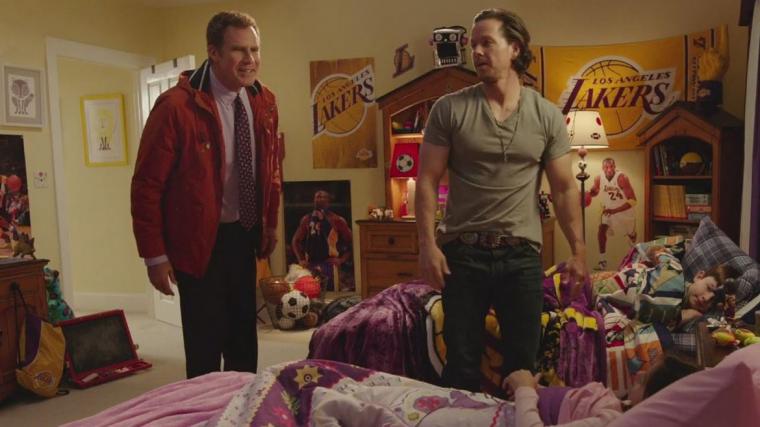 Will Ferrell and Mark Wahlberg in Daddy's Home

I wasn’t terribly happy to sit through Daddy’s Home, given that director Sean Anders’ slapstick starring Will Ferrell and Mark Wahlberg as über-competitive caretakers is a major comedown from the duo’s inspired pairing in 2010’s The Other Guys. But I was, at least, happy to have seen the movie during a well-populated screening with loads of grade-schoolers in attendance, as their frequent cackling clarified that the film was a family comedy, and therefore not designed to be as funny as, you know, a real comedy. I guess I was confused by the many jokes about Ferrell having to produce a sperm sample, and Bobby Cannavale manhandling Wahlberg’s prodigious package, and Ferrell’s stepdaughter (who appears to be about six) castigating him for “crying like a little bitch.” But what do I know? Bring the kids!

Anders’ movie is basically a 95-minute pissing contest between Ferrell’s mild-mannered Brad, recently married to mother-of-two Sara (Linda Cardellini), and Wahlberg’s long-absent Dusty, Sara’s ex-husband and the adored biological father to their young children (Owen Vaccaro and Scarlett Estevez). Once Dusty reunites with his family, the men passive-aggressively fight for the kids’ love, and the casting alone tells you where events will lead – Brad will overcompensate and be humiliated for his efforts, and Dusty will confidently sail through on a wave of pure cool. Unfortunately, even on its own silly terms, Daddy’s Home doesn’t play fair. It’s not enough that Brad is one of Ferrell’s signature, paunchy ne’er-do-wells with a penchant for weeping; he has to be given a career (programming director for a smooth-jazz radio station) telegraphing his loser-dom, as well as an inability to hold down several beers without making a nationally televised fool of himself. And while Dusty’s motorcycle, leather jacket, and six-pack abs immediately give Wahlberg the edge, he also wins favor by pulling off feats that aren’t humanly possible – surreptitiously building a palatial tree house in one night, for instance, or resuscitating Brad with one mild chest press when the electrocuted man’s heart stops. While Ferrell’s mania and Wahlberg’s underplaying are amusing, the film’s deck is too neatly stacked, and things get downright icky when Dusty recruits Cannavale’s GP to embarrass Brad further and provide yet another excuse to see Ferrell’s bare ass on-screen. (Again – get your kids those tickets!)

Yet I feel my holiday generosity lingering, and there are perks amidst the pitfalls. One is the eternal perk that is Thomas Haden Church, who has a few scenes as Brad’s boss and stashes the movie in his suit jacket with every inappropriate reminiscence. Cardellini is stuck with typically uninteresting fatigued-spouse duties, but has too much performance integrity to let herself be a doormat; when Sara is pissed, Cardellini makes it clear that she is pissed. Hannibal Buress, as a plumber who becomes an uninvited house guest, made me laugh out loud a half-dozen times, and Anders stages one quick slapstick routine – Dusty’s bike, unmanned, tearing through Brad’s house and landing on the roof of his car – with so much élan that I wanted to applaud. Plus, while the family reconciliation at the climax is easily predicted, this one reminds you that some predictabilities can be as funny and touching as you could want. Daddy’s Home may just be an underwhelming, dopey family comedy. But at this time of year, we regularly get underwhelming, dopey family comedies at the cineplex; we should just be grateful to Netflix that Adam Sandler couldn’t foist one on us. Of all the action thrillers on Kathryn Bigelow’s résumé, why was Point Break chosen as the one due for a remake? Near Dark I could understand; vampires are always popular. Blue Steel? Sure – it’s easy to imagine Kristen Stewart, Rachel McAdams, or the omnipresent Alicia Vikander filling Jamie Lee Curtis’ patrol boots. But Point Break? The one with the dead-president masks and adorable homoeroticism and a bleach-blond Patrick Swayze robbing banks when not hanging 10 on his surfboard? Is nothing sacred?!

Having asked that, the original Point Break was really just expertly directed crap, so it’s not like any sacred cows are being slaughtered in director Ericson Core’s extreme-sporting update. Again, a rookie FBI agent (Luke Bracey, a pale replacement for Keanu Reeves, if you can imagine) infiltrates a posse of criminals (led by a somnolent Édgar Ramirez) by attempting to prove that anything they can surf, he can surf better. But now it’s 2015, and having mere surfing skills is so-o-o-o 1991, so these guys can do everything: they bare-knuckle brawl; they sky-dive; they snowboard; they outrace rock slides on motorcycles; they leap from cliffs wearing those hilarious-looking flying-squirrel outfits. The stunts are pretty incredible, and Core (who’s also credited as the film’s cinematographer) and his team capture them with some style. But after about an hour of these and other such activities, I whispered into my hand-held recorder, “Any chance we’re gonna get a plot?”, and am still not sure we ever fully got one.

Basically, this Point Break is just an excuse for many long, long scenes devoted to the stunning feats of its polyoathletes – a term that, yes, I had to look up – with the occasional break for romance (Bracey’s with a pallid Teresa Palmer), meaningful stares between its leading bros, and lots and lots of clichéd howlers. (“It’s time to choose whose side you’re on!” and “You got too close to them, son!” both made the cut, but my favorite was Ray Winstone’s FBI mentor growling, “Try not to get yourself killed, kid,” because it sounded like he really couldn’t care less if the kid got killed or not.) Like its forebear, this Point Break is crap. But at least it’s occasionally fun to watch and tosses us a few nods toward Bigelow’s film; wisely, Core keeps the priceless moment, familiar from its reference in Hot Fuzz, with our hero so conflicted about shooting his buddy that he screams as he unloads his gun into the air. And right when I was going to goof on the opening extreme-biking scene for looking like a sports-drink ad, we discover that the bikers involved actually are filming a sports-drink ad. So bonus points for beating critics to the punch. Its title notwithstanding, Paolo Sorrentino’s Youth is a meditation on aging, and what’s remarkable about the movie is that you can actually feel yourself aging while you’re watching it. Sorrentino’s drama finds best friends of 60 years Fred Ballinger (Michael Caine) and Mick Boyle (Harvey Keitel) – the former a retired composer, the latter a noted film director – vacationing in a posh Alpine resort, and contemplating their mortality in between banter about enlarged prostates and leers at nubile naked women. In theory, this shouldn’t make for a cinematic deal-breaker, especially considering the casting of the leads and the writer/director’s penchant for lush, evocative imagery. (There’s common agreement that Sorrentino’s The Great Beauty won 2013’s Best Foreign-Language Film Oscar not because it was so great, but because it was so damned pretty.) Yet despite the arresting visuals, the wonderful music, and the acting pros who show up, Youth is a laborious snooze. It’s like an opulently designed Chekhov play if the director misread all the funny lines as serious, and all the serious ones as funereal.

It sucks when I have to rag on movies that I know we’re lucky to get in the area at all, especially when they premiere at Iowa City’s FilmScene, where just about any excuse to visit is a good one. And Sorrentino’s latest is hardly worthless. Cinematographer Lucca Bigazzi’s nighttime lighting, in particular, boasts a crystalline purity; the background songs and David Lang’s haunting score deliver the exact right touch of operatic melancholy; and if you cast your movie with Caine, Keitel, Rachel Weisz, and Paul Dano, you can’t help but set off some performance fireworks. (Weisz delivers several doozies when, in one unbroken take, she lets loose on papa Caine for his ill treatment of her mother.) But with Sorrentino’s dialogue sounding like something badly translated from Italian into English – or like Woody Allen when he’s working in the unbearably stodgy, chamber-drama mode of September or You Will Meet a Tall Dark Stranger – I didn’t believe in a single minute of this movie.

I didn’t believe in Caine’s sunset regrets or Weisz’s marital anguish, or in anything involving Keitel, whose director recruits a team of five 20-something screenwriters to help Boyle work out the story for his final cinematic “testament.” (Boyle titles this planned career-capper Life’s Last Day, so I also didn’t believe that people chose not to laugh in his face for how nauseatingly, pretentiously twee that title was.) I didn’t believe Dano when his movie star revealed that he’d worked with “all the best directors in America and Europe,” but was only recognized for playing a robot in a lark titled Mr. Q. I didn’t believe in the extras’ static, affected poses, or the subplot that found Queen Elizabeth II all but begging Ballinger to conduct a concert of pop numbers, or the magical realism that found a monk levitating and Boyle’s former female leads collectively confronting him on a hillside. (Based on the characters that show up, Mike Boyle is apparently not only the director of Barry Lyndon, Carrie, and The Homesman, but also Hot Pursuit.) I didn’t even believe in the celebrated five-minute cameo by Jane Fonda, who gives Keitel an impressively throaty dressing down but whose physical appearance – she resembles a wax-museum version of a septuagenarian Marilyn Monroe – doesn’t at all match the hardscrabble figure that nearly 90 minutes of lead-up has prepared us for. Sorrentino’s final shot suggests that maybe we weren’t meant to believe in any of this, but by the time it arrived, I was too frustrated, exhausted, and bored to care. I got to Youth a week later than I wanted to, which I felt bad about, but learned during the movie’s pre-show announcements that it’ll be running at FilmScene through January 21. So you still have plenty more chances to skip it.