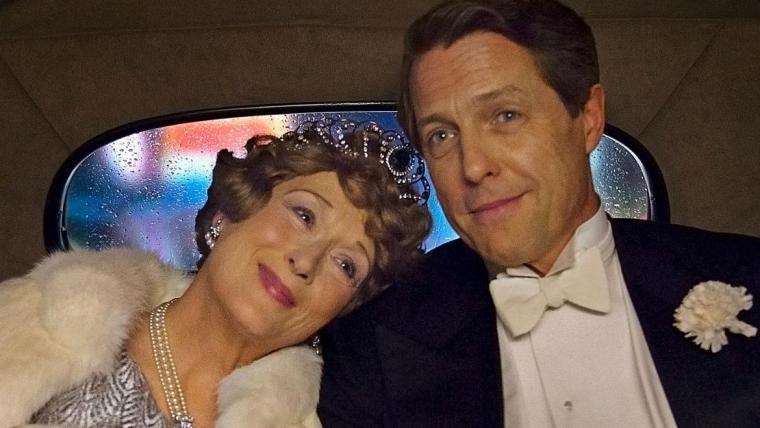 For more than 30 years, Meryl Streep has been singing on-screen in movies ranging from 1983’s Silkwood to last year’s Ricki & the Flash, with musical pitstops in a half-dozen outings in between. But not until the new bio-comedy Florence Foster Jenkins has the star ever sung quite this badly. Streep being Streep, of course, she sings badly brilliantly.

Playing the titular socialite who, at age 76, performed a legendarily god-awful recital at Carnegie Hall, Streep is about as much fun here as she’s been all decade. Any vocalist worth her salt will tell you there are few things more difficult than singing intentionally off-key, and Streep’s flat and rhythmless caterwauling – particularly while butchering Mozart’s “Queen of the Night” aria from The Magic Flute – is riotously, gloriously wretched. Yet miraculously, you don’t laugh at Florence. Streep, director Stephen Frears, and screenwriter Nicholas Martin have conceived the role with such vivid empathy, and make Florence’s lifelong love of music so palpable, that you can’t help but adore this shrill no-talent performing with such radiant pride and joy. Frears’ entire movie, in truth, is a similar sort of happy delight. Beyond the physicalized bear hug of Streep’s portrayal, Hugh Grant is masculine and tender as Florence’s devoted husband (albeit one with a girlfriend on the side), and Nina Arianda is a consistent hoot as a floozy whose early shock at Florence’s ineptitude morphs into genuine respect. There are brief, sharp turns by Brid Brennan, Christian McKay, and John Kavanagh; the mid-1940s décor and costuming are impeccable without being aggressively showy. And Simon Helberg, as Florence’s accompanist, delivers pricelessly aghast reaction shots, his understated panic suggesting a nervous breakdown dressed in a tweed suit and bow tie. Low-key and formulaic though it is, Florence Foster Jenkins is a minor marvel. Your ears may bleed, but your heart will swell. As far as I know, my nine-year-old niece and seven-year-old nephew don’t read my reviews, so I feel only moderate guilt in admitting that I wasn’t a fan of Disney’s original Pete’s Dragon even when I was a nine-year-old myself. (The kids saw it on video recently and lo-o-o-oved it.) But I am a fan, and a pretty major one, of writer/director David Lowery’s new Pete’s Dragon, and not just because we’re blessedly spared a braying-hillbilly Shelley Winters and “Candle on the Water.” Defying all expectation regarding 21st Century reboots, Lowery and co-screenwriter Toby Halbrooks have concocted a family adventure that’s actually quieter, graver, and considerably more thoughtful than its forebear – an enchanted tale closer in spirit to E.T., or Spielberg’s recent The BFG, than 1977’s musical fantasy. You’re clued in to Lowery’s seriousness of intent in his sad, artful staging of an early car crash and the subsequent threat of a wolf attack, and time and again the movie boasts a tricky blend of naturalism and awe: the lovable dragon Elliott silently soaring over a lush forest expanse; the orphaned wild child Pete (played, as a 10-year-old, by a marvelous Oakes Fegley) growing slowly re-accustomed to family life; the eyes of Robert Redford as a 70-year belief is proved a reality. Inevitably, of course, the mandates of modern Hollywood blockbusters rear their ugly heads, and we’re stuck with the requisite action-packed chase scenes and bridge peril, plus a stern-faced Karl Urban shouting, “Follow that dragon!” But for roughly 80 percent of its length, Pete’s Dragon is overflowing with intelligence and true wonder, and while the movie’s children (including Oona Laurence and the big-eyed Levi Alexander) give the most honest portrayals, the overall atmosphere is so relaxed that even the usually tense Bryce Dallas Howard emerges as genial and touching. The last time she faced an enormous green creature on-screen, Howard was teetering on laughably high heels in Jurassic World. Glad to see she’s discovered the benefits of flats. About 15 minutes into director/co-writer/cinematographer Sean Ellis’ new dramatic thriller, a character finally asks what audience members, myself included, were also likely asking about this World War II saga: “What is ‘anthropoid’?!” (Those entering the movie blind might easily imagine some kind of sci-fi/horror monstrosity with the face of Alicia Vikander and the legs of an octopus.) The answer, it turns out, is that it’s the name of a secret operation to assassinate Final Solution engineer Reinhard Heydrich, the Nazi commonly known as “the Butcher of Prague.” Ellis’ Anthropoid, meanwhile, is a mostly first-rate, at times unbearably brutal exploration of events surrounding those plans – a grim, sober, eventually transfixing account of an unimaginably dangerous and heroic assignment. Although it tells the real-life story of parachutists and potential assassins Josef Gabcik (Cillian Murphy) and Jan Kubis (Fifty Shades of Grey’s Jamie Dornan), you can feel the film, despite the exceptional production design, struggling a bit with veracity. During the movie’s relatively pokey opening third, the men seem too conveniently matched with a pair of beautiful Czech allies (Charlotte Le Bon and Anna Geislerová, both performing valiantly in underwritten roles), and a few too many genre clichés pop up; was it necessary for the operation’s chief turncoat to be telegraphed by his being the only male redhead in the cast? Yet once the plans for Heydrich’s killing are underway, Anthropoid becomes a rather shattering emotional experience. The assassination attempt itself is filmed with alacrity and no small amount of terror, Robin Foster’s subtly menacing score working our nerves as readily as the razor-sharp editing and anxious hand-held photography. After that scene, however, there’s nearly an hour of movie to go, and the ramifications of the parachutists’ actions make for ceaselessly engaging, frequently harrowing viewing, with a climactic assault on a church a masterpiece of finely choreographed battle frenzy. Given the inherently fascinating story, Ellis’ filmmaking skills, and the devastating portrayals by Murphy and Dornan (the latter of whom pulls off some exquisitely modulated panic attacks), Anthropoid is certainly in the top tier of recent World War II movies, and the first one in ages in which the violence, and not the melodrama, made me cry – even the off-screen beatings and bullets to the head are shattering. If you’ve been at all concerned that cinematic spectacle has made you inured to real-life savagery, check out Ellis’ film. You may not be as desensitized as you think. I laughed, and laughed often, at directors Greg Tiernan’s and Conrad Vernon’s Sausage Party, a computer-animated, proudly R-rated comedy that may as well have been titled The Secret Life of Foodstuff. But I’m really, really hoping that it marks the end of vocal star/co-screenwriter Seth Rogen’s cinematic stoner slapsticks, because I’m not sure the results can get more Seth Rogen-y than they are here – and I’m not sure I want to see them if they do. Visually, this superbly animated endeavor is clever as hell; there are brilliant nods to Gulliver’s Travels and Terminator II, and in a few scenes – the supermarket melee shot like Saving Private Ryan, the suppertime kitchen massacre – the movie hits almost unbelievable peaks of inventiveness and hilarity. Yet while Rogen, as our hot-dog hero Frank, sounds just like his prototypical, weed-smoking self (sarcastic, growly, every third word profane), nearly every other character, even the ones that shouldn’t, sounds like him, too; I may now have officially heard the word “f---” more times in 90 minutes than I’ve ever said it in my life. Still, see it for the occasional bursts of more varied comic personality courtesy of Kristen Wiig, Bill Hader, Michael Cera, Jonah Hill, Craig Robinson, Salma Hayek, and numerous others. See it for the squabbling lavash and bagel, voiced by David Krumholtz and Edward Norton (doing a pretty great Woody Allen impression). See it for the surprisingly unpredictable narrative and trenchant discourse on religion, and for the shockingly crude opening number by famed Disney composer Alan Menken. But whatever you do, do not see Sausage Party with your kids. If you think it’s tough getting them to eat their veggies now ... .