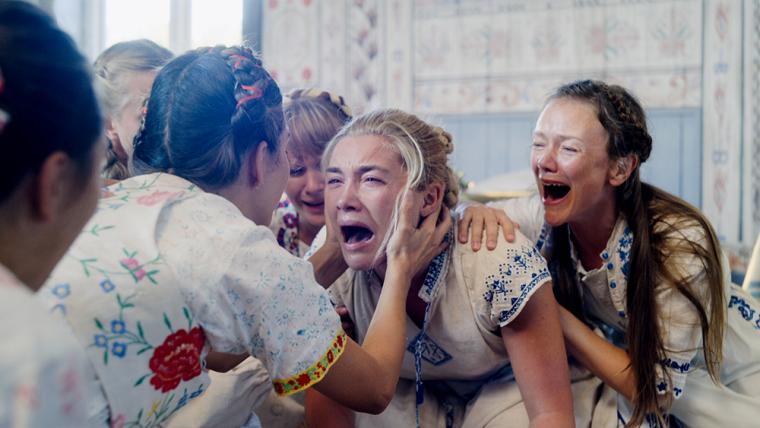 Midsommar, the new cinematic freakout by Hereditary writer/director Ari Aster, opens with barely withheld sobs and closes on the image of an ear-to-ear grin – and despite the unsettling, emotionally raw 140 minutes in between, you might find yourself exiting the theater smiling just as hard. Most horror flicks, even offerings as sensational as Hereditary, tend to peter out by their finales. Aster's latest, though, left me feeling unexpectedly great, climaxing on a note of such cathartic satisfaction that it was easy to ignore (for a while, at least) the over-indulgences, lapses in logic, and unfortunate predictability of the film's second half. I was more restless during Midsommar than I'd hoped to be, yet the moment the end credits began to roll, I was instantly eager to watch the movie again.

Those tears at the start belong to Dani (Florence Pugh), an American 20-something whose bipolar sister has sent her a cryptic e-mail that reads like a suicide note. With obvious reluctance, she calls her boyfriend Christian (Jack Reynor) for advice and consolation, and as Aster makes clear during a minutes-long closeup on the young woman's broken expression, Dani gets the response she expected from her beau of nearly four years: an instantly recognizable blend of mild support, passive hostility, and utter boredom. Christian, it turns out, has long been considering breaking up with Dani, a move actively supported by his grad-school bros Josh (William Jackson Harper), Mark (Will Poulter), and the native Swede Pelle (Vilhelm Blomgren). Before Christian can officially end things, however, the devastating actions of Dani's sister make a breakup out of the question, and months later, the couple is still together and still miserable. That's when it's revealed, to both the audience and Dani, that Christian and his buddies have planned a month-long summer sojourn to rural Sweden – a trip that Christian invites Dani on, even though he and the guys (Pelle excepted) don't want her there, and that Dani agrees to, even though she doesn't want to go.

At first glance, none of this has much to do with Midsommar's eventual terrors, which commence after our uncomfortable quintet arrives in the sequestered Swedish community of Hårga in time for a bucolic outdoor festival complete with white robes, floral crowns, and the inevitable dance around a maypole. Yet the protracted prelude in America and the first scenes overseas – with Aster devoting significant screen time to Dani's and Christian's stilted conversation and the bros' evident unease whenever Dani is around or her name mentioned – prove both transfixing and essential. Dani's panic and grief make her empathetic from the beginning, but you also can't ignore her somewhat alienating insecurity, neediness, and self-deprecation; after telling Pelle that Christian forgot her birthday, Dani quickly assumes the blame, saying it was her fault because she forgot to remind him. (I think it's safe to presume that we all know people like this, and they tend to drive us a little crazy.) Christian and his pals, meanwhile, seem kind of douchey, but they're at least trying, if some more halfheartedly than others. And these fractured personalities and strained relationships provide the heart and rooting interest once the Hårga festival gets underway, as we gradually realize both how naturally tethered our American protagonists are (in the us-versus-them way of most screen horror) and how fundamentally apart they are (in the positions they'll ultimately serve in Aster's deliciously queasy storyline). 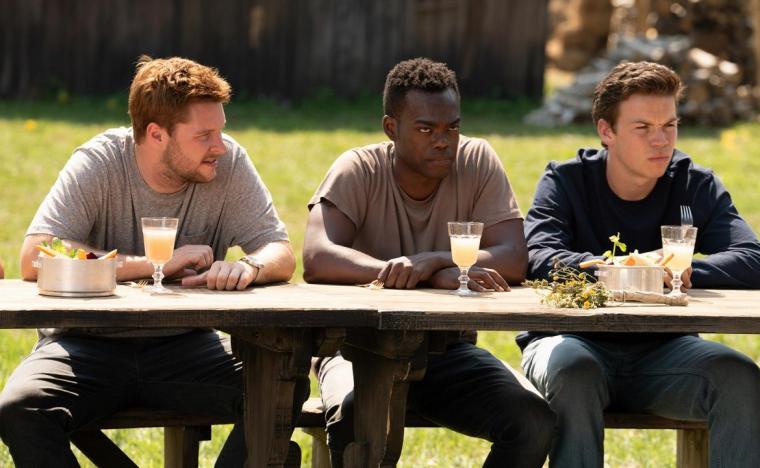 One of the many aspects of Stanley Kubrick's The Shining that made the 1980 film so revolutionary was Kubrick's insistence on presenting the majority of his Overlook Hotel shocks in brightly illuminated rooms and hallways, suggesting a nightmare you couldn't wake from even with all the lights turned on. Midsommar has an even more blinding look than The Shining, and produces similarly unnerving effects. When Dani, Christian, and the rest arrive in Hårga – the community's other visiting outsiders a pair of vacationing Brits (Ellora Torchia and Archie Madekwe) – the costumed locals greet them with bonhomie and beatific smiles while bathed in the incandescent glow of a Swedish noonday sun. Yet instead of warmth, cinematographer Pawel Pogorzelski's glaring light creates a startling anxiety, along with an encroaching sense of suffocation despite the wide-open vistas. Like the Overlook, Hårga feels like a place you're inherently not allowed to leave. (In a possible nod to Kubrick, the community's seating arrangement at mealtimes resembles the hexagonal eternity-symbol design in the Overlook's carpeting.)

Nearly all of the festival's atrocities – from the hideous fates of two community elders to the climactic pageant in which one of our leads is outfitted in a body-enveloping floral bouquet – take place under lighting this oppressively harsh, which does nothing to diminish their effectiveness, and, in truth, only accentuates Midsommar's suggestion of a collective evil that can't be fled. Yet while Aster's rigorously composed film is creepy and evocative throughout, I can't help but wish it were a bit more surprising. Hereditary, as it progressed, unleashed its supernatural goings-on with such incremental deviousness that 10 minutes before the final blackout, I had no earthly idea how it was all going to end. By contrast, the sick punchline to Aster's latest is fairly evident within minutes of the Americans' arrival in Hårga. There are still loads of juicy reveals and memorable images, and it's going to be fun, on repeat viewings, to pay closer attention to the hand-drawn murals that, as a friend recently suggested, no doubt spell out the exact nature of all of the twisted Hårga rituals. (One of those murals amusingly, if rather grossly, explains why Christian is given a fruity drink that's slightly redder in hue than anyone else's beverage.) But there's a lot of narrative lollygagging as Aster's plot reaches its inevitable conclusion – some of it, as in a scene of particular humiliation for Christian, all but guaranteed to induce inappropriate giggles. And many viewers might be ready to jump ship when Dani begins to demonstrate unusual passivity halfway through the film, her reasons for not trying to escape the commune – and, in fact, revel in the cult-like practices – seemingly dictated less by character than by the stranglehold of the script.

Aster's movie, though, is still well worth seeing (and, thanks to the nerve-fraying score by The Haxan Cloak, well worth hearing). Magic mushrooms are consumed not long after the Americans land in Sweden, and Aster's and Pogorzelski's trippy visuals frequently make you feel as though you've eaten some, too, with the off-putting liquidity of numerous solid objects suggesting that we're stuck, along with our characters, in a swirling Picasso painting. Aster's meticulous staging and knack for escalating dread are as evident here as they were in Hereditary, and as in that film, the writer/director peppers his presentation with enough unexpected jolts of humor – most of them courtesy of the profoundly uncouth Mark – to keep the film from feeling unremittingly dour. Best of all, Midsommar is graced with a leading performance by Florence Pugh that's every bit as expansive and gloriously ravaged as Toni Collette's in last summer's Aster debut. A British actress so reminiscent of Jennifer Lawrence that they could pass as sisters, Pugh has already been superb in such works as Lady Macbeth and this past February's Fighting with My Family. But here, she shows previously unrevealed depths of emotionalism and power, and even when Dani make senseless choices, Pugh makes them borderline-believable through fearless commitment, directness, and persuasiveness. As it could easily inspire no end of ugly conversations between romantic partners, Midsommar, to its considerable artistic credit, might qualify as one of the all-time worst date movies. In Florence Pugh, at least, it also gives us a lead with whom everyone can fall in love. 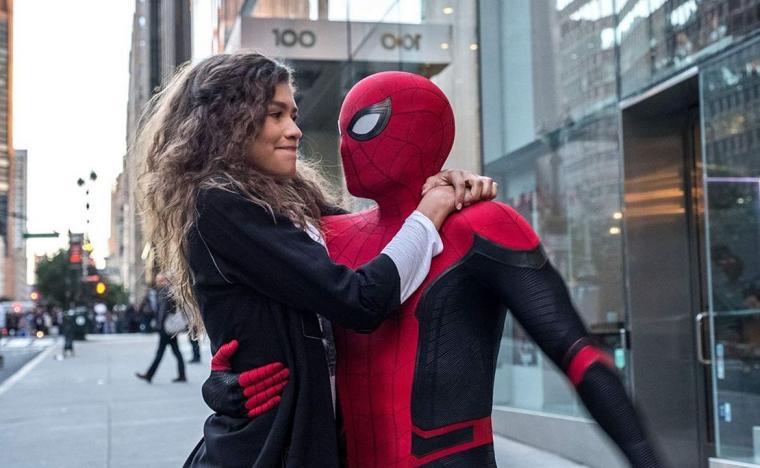 Next to the sublime Doctor Strange, 2017's Spider-Man: Homecoming is probably my favorite film in the Marvel Cinematic Universe, mainly because its stakes – especially for its genre – are so relatively low. There's an über-villain, of course, but he's played with decidedly earthbound threat by Michael Keaton, and the plotting doesn't center on any kind of quest for global dominance or mass destruction; Vulture's nefarious actions are of about equal import with Peter Parker's day-to-day struggles as an anxiously nerdy teen. Unfortunately, in director Jon Watts' new Spider-Man: Far from Home, we're back to the land of the over-familiar, with our hero's chief nemesis – one whose very identity, if revealed, would angrily incite the Spoiler Police – planning the deaths of untold thousands and the movie's visual effects blockbuster-ized in ways that the comparatively low-rent Homecoming shrewdly avoided. Consequently, I found much of Watts' superhero sequel formulaic and dull. Spider-Man and his environment were so refreshingly, recognizably human two summers ago that it's a true bummer to see our friendly neighborhood web-slinger so routinely Engame-d.

But there are perks. Spidey's sweet, soulful portrayer Tom Holland, of course, is among them. So are Peter's fresh, funny classmates enacted by Zendaya, Jacob Batalon, Tony Revolori, and Angourie Rice, and his teachers played by Martin Starr and J.B. Smoove. So are Marisa Tomei's Aunt May and Jon Favreau's Happy Hogan, a romantic match that completely baffles our 16-year-old hero. So is series newcomer Jake Gyllenhall, lending indie-flick quirkiness to this titanic studio product. So is series returnee Samuel L. Jackson, whose Nick Fury – for reasons the Spoiler Police would also arrest me for revealing – is a tad less on-his-game than in previous installments. Are you sensing a motif? The guests at this latest Marvel party are all winning and welcome. It's the party itself that reeks of by-the-numbers presentation and creative fatigue. I've been arguing for years for a cinematic-comic-book entertainment that dispenses with the action entirely and treats crowds to nothing but Spandex-clad comedy. Spider-Man: Far from Home, given the sheer charm of its “B” plots and witty fringe touches such as the instant meme of the “Peter tingle,” makes me yearn for that impossible dream more than ever. The late Stan Lee may forever be this Universe's patron saint, but just once, particularly in a film with this particular crime-fighter, I'd rather it was John Hughes.