Sympathy for the Devils: "Suicide Squad" and "Nine Lives" 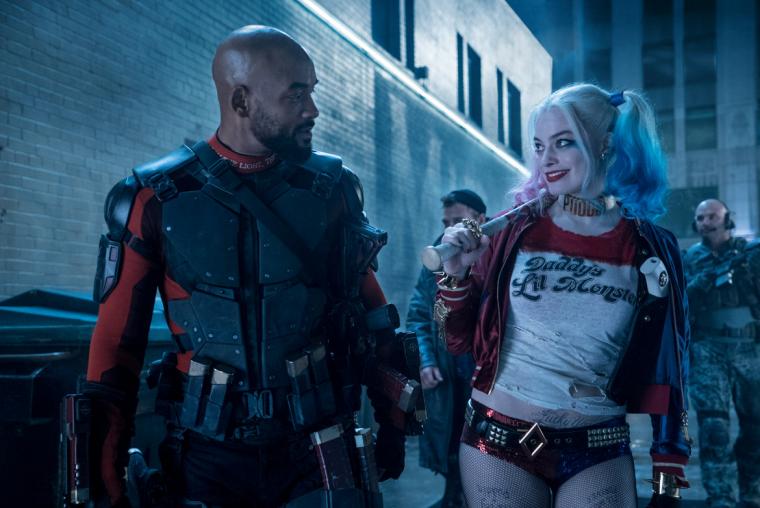 Will Smith and Margot Robbie in Suicide Squad

Everything you’ve likely heard about Suicide Squad is true – unless, for some reason, you’ve heard it’s great.

Yes, writer/director David Ayer’s critically lambasted opus gathers a bunch of second- and third-tier DC Comics villains for a planet-saving mission, and yes, there are too many of them – and for bad guys, they’re not even that bad. Will Smith’s Deadshot may be a hired assassin, but he wants nothing more than to be reunited with his grade-school daughter, and, as the guy makes clear, he refuses to kill women and children. Jay Hernandez’s flame-throwing Diablo may indeed kill women and children – or, rather, one woman and child that we know of – but he feels really, really bad about it. Margot Robbie’s Harley Quinn may be a pigtailed weirdo with a baseball bat and a skirt the size of a necktie, but she sure does love her boyfriend, whom she affectionately calls “Puddin’.” And on and on: Karen Fukuhara’s sword-wielding Katana, grieving over her late husband’s murder; Adewale Akinnuoye-Agbaja’s Croc, a misunderstood mope from the sewers; Jai Courtney’s boomerang-thrower helpfully named Boomerang, who guzzles Australian beers and collects plush pink unicorns ... . None of the killers and purported psychopaths recruited for their Suicide Squad duties emerges as truly threatening or the least bit unpredictable, and in one late-film tavern scene, there’s so much moist-eyed regret and soul-baring that you’d almost think you were watching the last reel of The Breakfast Club. You’ve perhaps heard that Ayer’s movie is overstuffed with plot. That’s putting it mildly. In addition to the drearily action-packed storyline that finds the squad battling hordes of zombies with faces that resemble blackberries – the fruit, not the phone – we’re also given a romance between Joel Kinnaman’s Rick Flag and Cara Delevingne’s June Moore (the latter possessed by the spirit of a time-traveling witch), governmental duplicity courtesy of Viola Davis and David Harbour, more character-establishing flashbacks than you can count, and a rescue operation orchestrated by The Joker himself. (Appearing in what basically amounts to an extended cameo, Jared Leto doesn’t come close to approximating the creepy charisma of Heath Ledger – or Cesar Romero, for that matter.) Maybe you’ve heard that the film is similarly overstuffed with music? Dead-on accurate. Every last introduction of our anti-heroes is accompanied by an eye-rollingly on-the-nose song selection – Robbie is granted two of them with the equally obvious “You Don’t Own Me” and “Super Freak” – and many more play as underscoring to fight scenes or even basic, one-on-one conversations. “Bohemian Rhapsody,” meanwhile, plays over the finale. Was the inclusion of all these tunes what producers meant when, this past spring, they announced that re-cuts and additions were being made to make Suicide Squad more “fun”?

If so, I guess I’m grateful, because even though the soundtrack made me groan, Heaven only knows how tedious the results would’ve been without the contributions of Rick James and Queen. To be fair, Ayer’s outing isn’t the portentous dumpster fire that was Batman v Superman. Every once in a while, Smith and Robbie share a spiky chemistry that reminds you how entertaining they were together in last year’s Focus, and the other performances are mostly decent; Hernandez’s depiction of Zen-like self-loathing is particularly fine, and Davis, as is her wont, invests quiet declaratory sentences with so much emotional force that you can’t take your eyes off her.

But for a movie that aims to be subversive and edgy, this latest comic-book blockbuster is depressingly timid stuff, with none of its villains doing anything unthinkable to your average white-hatted superhero. What possible moral conundrum could there be in the annihilation of a tentacled CGI mutant? (I guess it’s meant to be ironic than the most anti-heroic act of violence here is perpetrated by Ben Affleck’s Batman, who got a big laugh from my crowd when he punched Harley Quinn in the face.) And with its meandering narrative nearly as incoherent as its editing – at one point, a two-mile helicopter ride takes our team from broad daylight to pitch darkness – Suicide Squad bores and fumbles when it should instead shock and soar. The inevitable sequel to this franchise-starter can only be better. I say that all the time, and one of these days, damn it, I’m gonna be right. In director Barry Sonnenfeld’s Nine Lives, Kevin Spacey plays Tom Brand, a billionaire magnate so fixated on erecting the world’s tallest building that he longer has time for his wife (Jennifer Garner) and daughter (Malina Weismann). One day, while shopping for his child’s birthday, he stumbles into a pet shop owned by the eccentric Felix Perkins (Christopher Walken) and purchases a cat – even though Tom loathes cats – named Mr. Fuzzypants. But before he can bring the feline home, a rooftop business meeting ends with Tom being struck by lightning, his body subsequently comatose in the hospital while his soul resides in the body of the kitty. While seeking a cure for his supernatural condition, Tom realizes that he should have been a better husband, father, and boss, and on the eve of his new building’s ribbon-cutting ... .

Enough. I can’t. It’s just too effing stupid, in addition to criminally unfunny, tortuously sentimental, ineptly staged, and, for a “family” comedy, weirdly, deeply unpleasant. (Did I mention the hints of adultery, euthanasia, and a climactic suicide attempt?) A possible new career low for all involved, one in which even the CGI rendition of Mr. Fuzzypants should file a defamation lawsuit, it feels like simply ignoring Nine Lives is too good for it. This sickly thing deserves to be spayed.