Take Your Daughter to America Day: “Borat Subsequent Moviefilm,” “What the Constitution Means to Me,” and “The Empty Man” 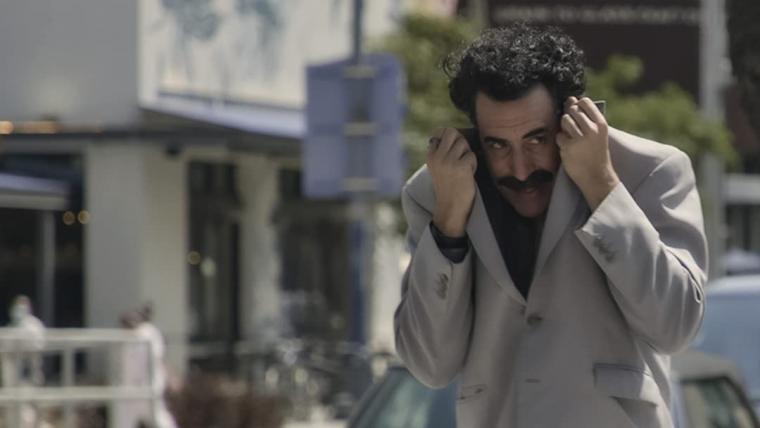 What's the most subversive thing about Sacha Baron Cohen's anarchic comedy sequel Borat Subsequent Moviefilm? Cohen's jackass journalist, in disguise as Donald Trump, interrupting a Mike Pence speech to offer the vice president Borat's 15-year-old daughter as a gift? Borat, this time in Texas disguised as a rotund country crooner, inspiring a group sing-along about the “Wuhan flu” and chopping up journalists “like the Saudis do”? Rudy Giuliani, in a widely discussed scene, caught on camera tucking in his shirt (or “tucking in his shirt”) while lying on a hotel bed in front of a young female reporter?

Or maybe, just maybe, is it that Cohen is neither the MVP nor the true star of his own movie, with those titles instead going to 24-year-old Bulgarian actress Maria Bakalova? Say what you will about the film's crudeness, crassness, and frequently savage (and hysterical) political commentary: Bakalova matching Cohen in comedic bravado, and oftentimes eclipsing him, is perhaps this follow-up's biggest surprise of all.

As his Subsequent Moviefilm character unnecessarily tells us, a lot has changed since Cohen unleashed his signature figure upon an unsuspecting world in the 2006 phenomenon Borat: Cultural Learnings of America for Make Benefit Glorious Nation of Kazakhstan. (The new film recently began streaming on Prime Video and is also playing locally at the Blue Grass Drive-in). For one thing, most everyone now seems to recognize the mustachioed moron in the blue-gray suit, which necessitates a lot of costume and identity changes as he again goes about exposing the bigotry, stupidity, and occasional kindness of “ordinary” Americans through staged shenanigans and hidden-camera embarrassments. But Borat himself has changed, too. In the 2006 release, he was pathologically obsessed with meeting and marrying Pamela Anderson – or at least stuffing her in a sack and whisking her off to his home country. Borat's libido, however, doesn't even get a passing mention in director Jason Woliner's sequel. Cohen's creation is still an obsessive, if now fixated on bequeathing his daughter Tutar to a high-ranking American in order to avoid a Kazakhstanian execution. (It's a long story.) This, however, is a kinder, gentler, less psychotically self-involved Borat, and if Subsequent Moviefilm consequently doesn't have quite the satiric bite of his previous moviefilm, the stark character change opens up all sorts of avenues for unexpected comic inspiration. 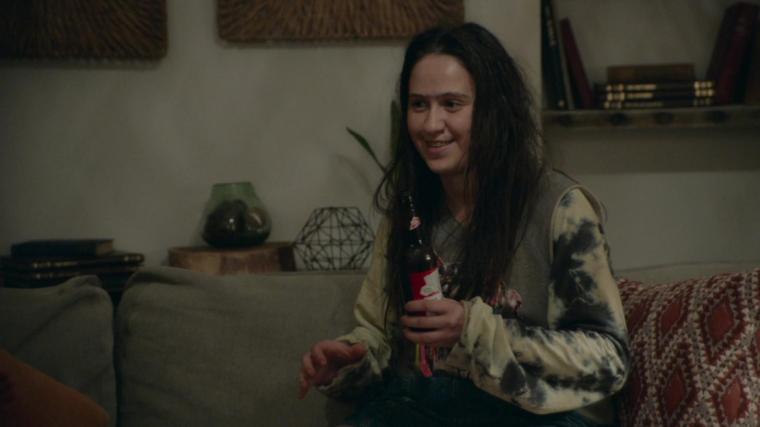 This isn't to say that Borat has gone entirely soft, and there are still wicked take-downs aplenty: on aghast bluenoses at a debutante ball; on Instagram influencer and self-described “sugar baby” Macy Chanel; on a pair of drawling QAnon supporters in their COVID-19 bunker. (For their parts, Pence and Giuliani do a pretty solid job of taking themselves down.) The heart of the film, though, lies in Borat's evolving relationship with Tutar, and more specifically with Tutar herself, whose gradual transition from caged feral child to self-assured reporter is both riotous and downright moving. Tutar may, as she discreetly demonstrates, be able to open a beer bottle with her “small hole,” but thanks to Bakalova's rather astounding performance, she's also capable of breaking your heart.

While I'm not sure a Borat movie could ever be described as feminist, damned if Bakalova, Cohen, and Cohen's seven co-screenwriters don't almost convince you otherwise. Even though her first appearance finds Tutar, in her native country, treated no better than livestock, it's evident from the start that she's tougher and smarter than her father gives her credit for being, and also fully able to bend Borat's intentions to her will; he may plan on selling Tutar off at the first opportunity, but the sale is going to be on his daughter's terms. And it's not just that Tutar is Borat's match – Bakalova is more assuredly Cohen's match. Trading warp-speed banter in and out of broken English, and with Bakalova's readings as dementedly novel as Cohen's, the actors radiate the in-character performance joy of such classic comedy pairings as Hepburn and Tracy or Levy and O'Hara, feeding off one another and subtly bettering one another.

There is, as you'd imagine, considerable shock to be found in Borat Subsequent Moviefilm, and as usual in movies of this deranged-sketch-comedy ilk, not all of it is effective. (The meticulously crafted reveal behind the origin of COVID-19 is a beauty; the wrap-up to the debutante-ball dance is merely gross.) Yet nothing shocked me quite like Bakalova's stealing of the film from right under Cohen's nose – and it's larceny that you can tell Cohen himself appreciates and adores. Borat's creator is currently on a mission to get his co-star nominated for an Oscar, which is a lovely gesture, but also a slightly insufficient one. He should be angling for Bakalova to deservedly win. 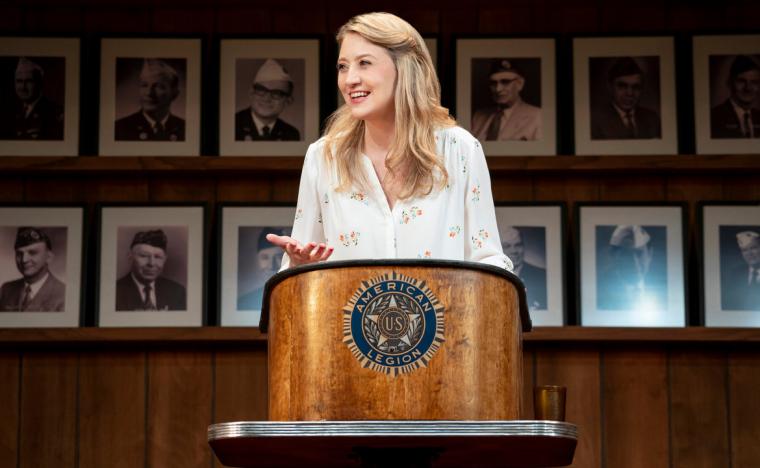 WHAT THE CONSTITUTION MEANS TO ME

Borat Subsequent Moviefilm concludes with a subtitled plea that makes no bones about the movie's agenda: “Now vote … or you will be execute.” That's not precisely the sentiment behind another streaming release that dropped on Prime Video last week – the filmed version of author/star Heidi Schreck's Broadway hit What the Constitution Means to Me – but a less aggressive take on that message is certainly implied, and it can hardly be a coincidence that both titles landed less than two weeks before Election Day. Directed with empathy, fluidity, and grace by the gifted and very busy Marielle Heller (Can You Ever Forgive Me?, A Beautiful Day in the Neighborhood), this recording of a 2019 WtCMtM performance finds Schreck portraying herself as a 15-year-old Constitutional debater – the prize money that Schreck won in competitions paid her way through college – and in her late-40s present, with her early passion for the Constitution leading her to question whether the document currently serves any positive purpose at all.

As captured-for-posterity theatre pieces go, Heller's work features some of the genre's traditional irritations: a camera that can't quite keep up with the stage movement; too many reaction shots of delighted audience members. Yet it's essential viewing nonetheless – a frank, funny, sobering, and ultimately exhilarating exploration of someone grappling with historic writing she championed until she began to recognize what, for women especially, had to be considered significant failings. Schreck is a marvel here, so sensationally likable and intelligent and, when recounting the abuse endured by generations before her, pained that you frequently get the buzzy tingle that accompanies only the greatest of live stage performances. But while the fabulous What the Constitution Means to Me is essentially a one-woman show, it isn't quite; Mike Iveson adds humor and gravitas as the play's emblem of “positive male energy,” and in the final minutes, high schooler Rosdely Ciprian – a champion Constitutional debater herself – makes a vivid impression, enacting an extemporaneous stage debate with Schreck and forcing the older woman to passionately defend the document she just spent 45 minutes dismantling. Heller's and Schreck's wonderful, powerful, argument-inspiring movie made me feel utterly great. Ciprian's dynamic presence, for a while at least, even made me feel great about our future.

For better or worse, Hollywood keeps tossing out random sacrificial lambs to help fill mostly vacant cineplexes, and it initially looked like we were getting a real loser with writer/director David Prior's horror flick The Empty Man, which looked and sounded an awful lot like a B-team version of the similarly titled Candyman. (The latter concerns a murderous supernatural being who manifests itself when its name is spoken; the new film's monster shows up when its name is merely thought.) Nothing about the film's publicity suggested anything other than cheap, derivative thrills, and perhaps consequently, the movie has been almost universally ignored. The hefty stable of house critics at RogerEbert.com didn't even bother reviewing it, and they review everything.

So consider me officially gobsmacked: Not only is The Empty Man not bad, it's actually pretty close to terrific. At 135 minutes, Prior's adaptation of a Boom! Studios graphic novel is definitely overlong, its occasional stabs at humor don't really pan out, and the film definitely crawls up its own ass in the last half hour, apparently unsure about whether it's designed to be a tony slasher flick or a Get Out-style mind-blower. Yet Prior, particularly in the film's marvelously unsettling 20-minute prelude, demonstrates exceptional flair for foreboding and queasy imagery and memorably sinister sound cues in the style of Ari Aster, lead James Badge Dale is forceful and sympathetic, and the narrative blasts off into numerous fascinating directions I never once anticipated; the trailers may suggest Candyman, but Prior's outing plays far more like Hereditary. I don't want to say much else for fear of building unreasonable expectations; the movie is still something of a mess. Yet it's a creepy, hypnotic, unexpectedly resonant mess, and certainly of more interest than 90 percent of the new offerings and anniversary-edition reruns currently in release. I'm taking what I can at the cineplex these days, but I would have gladly taken The Empty Man even under more ideal circumstances.