A Tale of Two Mollys: “Men in Black: International” and “Late Night” 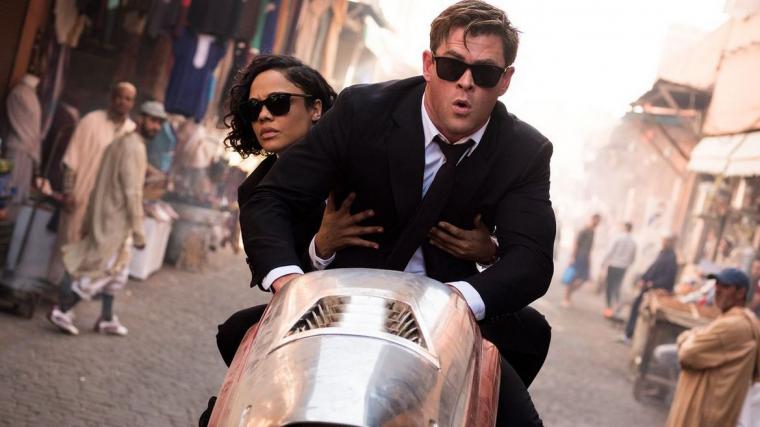 Tessa Thompson and Chris Hemsworth in Men in Black: International

I read an article this past weekend devoted to our current, collective state of franchise fatigue, with the disappointing domestic box office for Godzilla: King of the Monsters, The Secret Life of Pets 2, and Dark Phoenix cited as proof that audiences are getting tired of seeing the same ol' things in newfangled packaging. The article actually kicked off with news of the underwhelming first-day numbers for the rebooted Shaft (which I've yet to see) and Men in Black: International, the latter of which, over its opening weekend, still grossed more than the phenomenal Booksmart will during its entire run. What that “Are franchises finally over?!” piece failed to suggest, though, was that maybe these particular sequels weren't making major bank because they're just not good. And the third sequel to 1997's Men in Black might be the not-good-est of them all – an exhaustingly manic and just-plain-exhausting reboot to a series that should have ended with 2012's surprisingly clever Men in Black 3. The only real surprise here is that cleverness is in such depressingly slim supply.

With Will Smith presently smothered in blue for Aladdin and Tommy Lee Jones no doubt projecting his grumpiness elsewhere, the job of filling their MIB shoes now goes to Tessa Thompson and Chris Hemsworth, whose testy badinage was (for some) one of the major highlights of Thor: Ragnarok. That film, however, at least provided them with broad comic archetypes that clashed in satisfying ways. Director F. Gary Gray's aliens-among-us adventure, with its lame script by Matt Holloway and Art Marcus, merely has its stars playing the same state of largely implacable coolness; the same effect could have been reached had Thompson's or Hemsworth's co-star actually been a mirror. What negligible plot there is concerns Thompson's Molly Wright, who, as a young girl, witnessed the memory-deleting “neuralizing” of her parents by MIB agents. Twenty years later, the alien-obsessed Molly infiltrates MIB headquarters demanding a piece of the back-suit-ed, Ray-Ban-ed action, and eventually earns trainee status as Agent M, a London-office partner to Hemsworth's celebrated Agent H. And from there, it's more of the series same: an extraterrestrial threat to human existence; encounters with all manner of CGI critters great and small; car chases and laser blasters and deadpanned wisecracks; and, for variety, a subplot involving a hidden mole within the Men in Black organization – a character whose identity is only shocking if you've never before seen a movie. 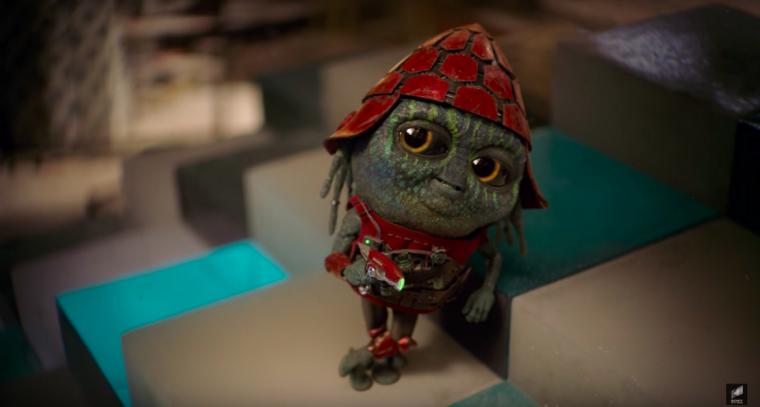 Not all of this is as tedious as it sounds. (Just most of it.) As usual, there are some ticklish creatures on display, and, in one memorable instance, not on display: I particularly liked the shoes that appeared to be supporting an invisible alien but were actually just ambulatory shoes complete with fangs and tongues. While she's not around nearly as much as you'd like, Rebecca Ferguson gives slyly witty line readings, and proves herself an impressive ass-kicker, as one of Agent H's exes who has an extra arm on her back solely for punching. And in one early scene, Tessa Thompson squares off against Emma Thompson (Thompson Twins!) as the MIB's New York office chief, and the movie briefly suggests the fun that may have resulted had Emma, and not Chris, been cast in the Tommy Lee Jones part.

Otherwise, though, that aforementioned article wasn't entirely inaccurate: It's franchise fatigue all over the place. Gray's pacing may be speedy, but despite the globe-trotting and shape-shifting, there's nothing inherently at stake, and certainly nothing that lingers for even 10 minutes after the end credits roll. Although Tessa Thompson and Hemsworth have undeniable chemistry, they're not necessarily allowed to share it here, with their characters' mild flirtation barely making an imprint on what is otherwise merely bland mutual respect. And while Men in Black 3 gave us fresh invention in the forms of Michael Stuhlbarg's eccentric alien Griffin and Josh Brolin's younger version of Tommy Lee Jones' Agent K, there are no comparable delights this time around: Liam Neeson does his grim and gruff Liam Neeson thing, Rafe Spall is given nothing interesting to say or do, French twins Larry and Laurent Bourgeois are employed solely as sight gags/threats. Meanwhile, much as I could listen to Kamail Nanjiani say “ass clown” all day, his voice-over performance as a servile chess piece that resembles an Easter egg is waylaid by too many groaner jokes that might divert grade-school patrons, but if so, just barely. The film is too intentionally throwaway to get in a dither about. Yet it's still disheartening to see that so many resources, and so much talent, and so much promotion, and so much money, has again been put toward a 2019 franchise entry so profoundly inconsequential. At Men in Black: International, the victims of those flashing neuralizers may as well be us. 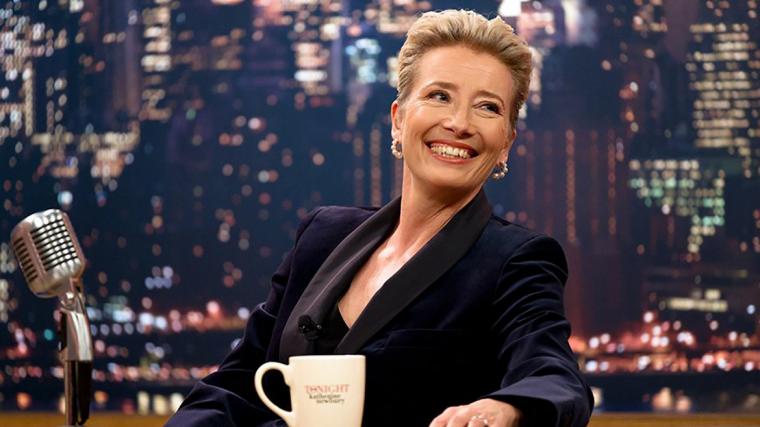 Movies such as Men in Black: International make it all the easier to appreciate a movie such as director Nisha Ganatra's Late Night – a release that isn't based on pre-existing material, that boasts wit and emotion and narrative engagement, and that gives Emma Thompson a screen purpose beyond snarky asides and glowering. Here, she plays Katherine Newbury, a venerated talk-show host (with an unlikely 43 Emmys to her name) whose program, jokes, and relevance are in speedy decline due to personal malaise and the formulaic contributions of her all-male, all-white writing staff. Enter fledgling comedy writer Molly Patel (Mindy Kaling), an Indian-American who joins the team as a diversity hire yet is determined to make the most of her opportunity. If that sounds more like the set-up to a traditional, 24-episode workplace sit-com than a feature film, you're not wrong; Kaling, who also wrote the screenplay, is of course a veteran of TV's The Office and The Mindy Project, and her script is peppered with instantly recognizable comic stereotypes, handily resolvable subplots, and fringe touches that feel like direct nods to beloved television staples. (Among Newbury's eight-person writing staff, three of them never speak … just like three of Liz Lemon's writers never spoke on 30 Rock.) Yet if, at Late Night, it sometimes feels as though your screening should include commercial breaks and your theater seat should have an accompanying remote for channel-surfing, the experience itself is light, breezy, and completely winning, with just enough Very Special Episode flourishes (sexism, racism, adultery, Parkinson's, #metoo) to make it seem weightier than it really is. Forty-three Emmys is a lot, but I'd gladly reward the film with at least a couple of 'em.

One would most certainly go to Thompson, who has the finest showcase for her acidic verve and ace timing since Mike Nichols' 2001 Wit, and who makes Newbury utterly fascinating in her many (sit-com) contradictions: She's cruel yet flexible; patronizing yet sincere; haughty yet fearful. Considering it would probably take three of four TV seasons to wholly unpeel this particular onion, the hilarious, heartfelt Thompson does a pretty smashing job of it given the 100 minutes she has here. I'd also gladly hand an award to Amy Ryan, who only has a few scenes in which her all-business network CEO can make an impression, but who's so thrillingly forceful and confident and funny that the only words that came to mind whenever she was on-screen were “spin-off, please.” Yet like the most watchable of TV comedies, Ganatra's movie is filled with first-rate performers playing comfortably familiar types whom you continually look forward to seeing: John Lithgow, Hugh Dancy, Reid Scott, Max Casella, Denis O'Hare, Paul Walker Hauser, Ike Barinholtz. And while nothing that happens in Late Night will be entirely unexpected to those weaned on broadcast television, Thompson and Kaling are absolutely (and sometimes profanely) charming in their formulaic opposites-attract routine; it may not be a cinematic compliment, per se, but I'd happily watch these two spar and bond in half-hour installments for years to come. Why do franchises so rarely result from the projects that actually deserve them?