“The Birdcage”: 25th-Anniversary Screenings, June 27 through 30 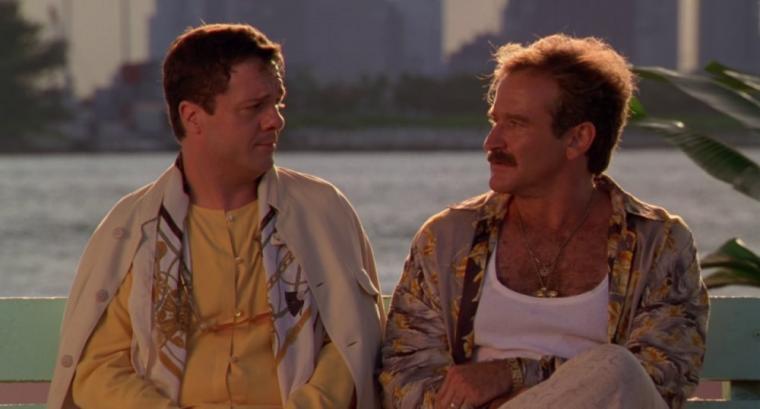 One of the most intelligent, loving, and hysterical film comedies of the modern era will make a 25th-anniversary return to the big screen when Rave Cinemas Davenport 53rd 18 + IMAX, from June 27 through 30, houses director Mike Nichols' The Birdcage, the riotous slapstick starring Robin Williams and Gene Hackman that the Washington Post's Desson Thomson called “a spirited remake of the French drag farce [that] has everything in place, from eyeliner to one-liner.”

In Americanized update on La Cage aux Folles, the Oscar-nominated 1979 release that spawned a massively successful, Tony Award-winning musical of the same name, engaged couple Val Goldman (Dan Futterman) and Barbara Keeley (Calista Flockhart) shakily introduce their future in-laws to one another. Because of the conservative leanings of Barbara's parents, Val's father Armand (Robin Williams), a gay drag-club owner, pretends to be straight at the behest of Val, and also attempts to hide his relationship with Albert (Nathan Lane), Armand's life partner and the club's flamboyant star attraction. But will the act fool Barbara's mother (Dianne Wiest), and more especially her father, controversial Republican Senator Kevin Keeley (Gene Hackman)? Throw in Hank Azaria as Armand's and Albert's faithful “house man” forced to play butler (and wear shoes) and you have The Birdcage, a slapstick smash that eventually grossed more than $185 million was deemed “enchantingly witty” by Entertainment Weekly's Owen Gleiberman.

Also described by ReelViews' James Berardinelli as “so boisterously entertaining that it's easy for the unsuspecting viewer not to realize that there's a message here,” The Birdcage's celebration of a committed homosexual relationship found the movie nominated for a GLAAD Media Award, with the Gay & Lesbian Alliance Against Defanamation praising the film for “going beyond the stereotypes to see the characters' depth and humanity. The film celebrates differences and points out the outrageousness of hiding those differences.” One of the first movies to win the Screen Actors Guild Award for Outstanding Performance by a Cast in a Motion Picture, Nicols' entertainment also went on to receive an Academy Award nomination for Best Production Design, Golden Globe Award nominations for Best Motion Picture – Musical or Comedy and Best Actor for Lane, and a Writers Guild of America Award nomination for Elaine May's screenplay. Three songs by legendary composer Stephen Sondheim were also adapted and arranged for the film by composer Jonathan Tunick: the original tune “Little Dream”; “Can That Boy Fox Trot,” a number cut from Sondheim's Follies; and “Love Is in the Air,” a song originally meant to open A Funny Thing Happened on the Way to the Forum that was eventually replaced by the iconic “Comedy Tonight.”

The 25th-anniversary screenings of The Birdcage at Rave Cinemas Davenport 53rd 18 + IMAX will take place at 3 and 7 p.m. on June 27, at 7 p.m. on June 28 June 30, and more information on the presentations is available by visiting Cinemark.com and FathomEvents.com.