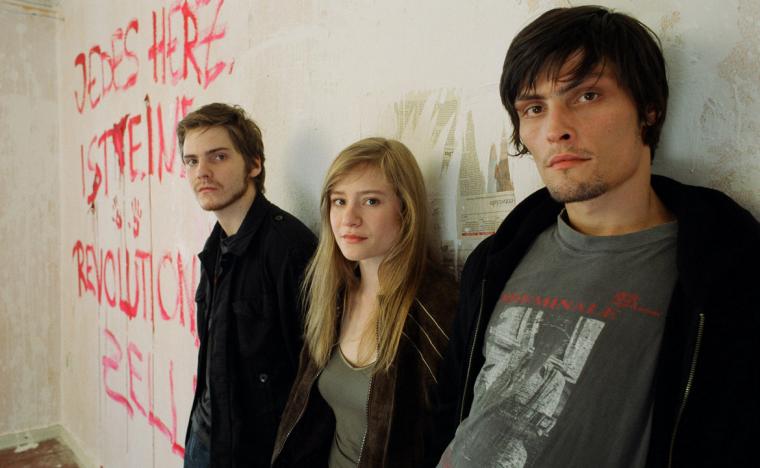 Daniel Brühl, Julia Jentsch, and Stipe Erceg in “The Edukators" at Rozz-Tox -- April 2.

Teaming up for the new series Kinogarten that will screen German films on the first Friday of every month through September, Rock Island's Rozz-Tox and Davenport's German American Heritage Center present the venues' season-opener with an outdoor April 2 showing of The Edukators, the award-winning 2004 release that the Los Angeles Times called a “sweet, funny, and gripping romantic adventure.”

Titled Die fetten Jahre sind vorbei in Germany, The Edukators is a romantic crime drama by Austrian director Hans Weingartner that went on to receive a 10-minute standing ovation at the Cannes Film Festival. A co-production between German and Austria, it stars Daniel Brühl (who went on to later fame in Quentin Tarantino's Inglourious Basterds), Stipe Erceg, and Julia Jentsch as three young, anti-capitalist Berlin activists involved in a love triangle. The friends, calling themselves "the Edukators," invade upper-class houses, rearrange the furniture, and leave notes identifying themselves, and as the story progresses, political ideology becomes entangled with the characters' complicated relationships.

At Cannes, The Edukators was nominated for the top prize the Palme d'Or, marking the first time a German film was entered in the competition Wim Wenders' Faraway, So Close! in 1993, and at the German Cinema New Talent Awards during the 2004 Munich Film Festival, Weingartner was named Best Director, Erceg Best Actor, and co-writers Weingartner and Katharina Held received a jury award. The movie's reviews were similarly enthusiastic. Joe Morgenstern of the Wall Street Journal called The Edukators "uncommonly smart and interesting," while the Austin Chronicle's Marc Savlov said the movie was a "smart, kicky little gem." According to Sean Axmaker of the Seattle Post-Intelligencer, it was "a rare film that gets smarter as it goes along ... inject[ing] a satisfying dash of pragmatism every time it seems ready to slip into either unearned idealism or cynical fatalism." And in The Hollywood Reporter, Ray Bennett wrote, "The Edukators is that rare beast: a terrific movie that boasts intelligent wit, expert storytelling, delightful characters, and grown-up dialogue, plus suspense and a wicked surprise ending."

The Edukators, which will be presented in German with English subtitles, will enjoy a socially distanced outdoor screening at Rozz-Tox on April 2 beginning at sundown or 8 p.m. (whichever comes first), guests are required to wear masks, and food and beverages will be available for purchase. The screening itself is free, and more information on the Kinogarten film series is available by visiting RozzTox.com and the German American Heritage Center at GAHC.org.