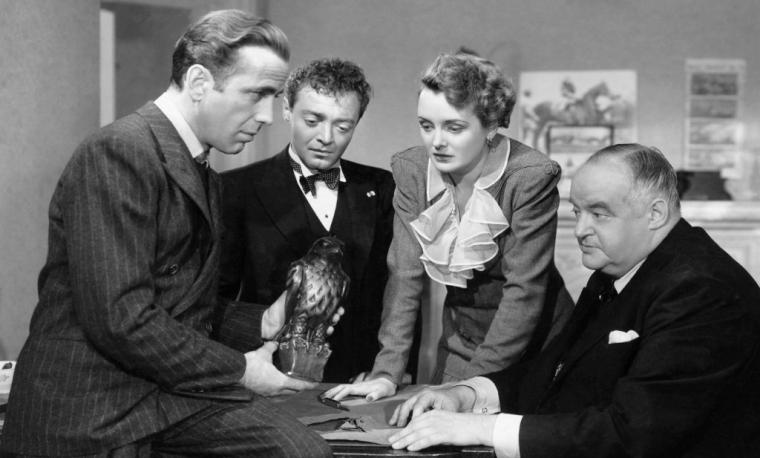 In this unforgettable classic written and directed by Oscar winner John Huston, Bogart plays author Dashiell Hammett's iconic detective Sam Spade, who gets more than he bargained for when he takes a case brought to him by a beautiful but secretive woman played by Mary Astor. As soon as her Miss Wonderly shows up, trouble follows as Sam's partner is murdered and Sam is accosted by a man who demands that he locate a valuable statuette. Sam, entangled in a dangerous web of crime and intrigue, soon realizes he must find the one thing they all seem to want: the bejeweled Maltese falcon. Co-starring Gladys George, Peter Lorre, and Sydney Greenstreet, The Maltese Falcon debuted in the fall of 1941, and upon its release, Variety magazine deemed the movie “one of the best examples of actionful and suspenseful melodramatic story telling in cinematic form.”

The New York Times' chief film critic Bosley Crowther, meanwhile, described the release as “the best mystery thriller of the year,” adding that “young Mr. Huston gives promise of becoming one of the smartest directors in the field. The trick which Mr. Huston has pulled is a combination of American ruggedness with the suavity of the English crime school – a blend of mind and muscle – plus a slight touch of pathos.” The Maltese Falcon went on to earn Academy Award nominations for Best Picture, Adapted Screenplay, and Supporting Actor (Greenstreet), and Huston's movie eventually became one of the first 25 films selected by the Library of Congress o be included in the National Film Registry for being “culturally, historically, or aesthetically significant.” Its current critical approval rating at RottenTomatoes.com sits at 100 percent, with the site's official consensus reading, “Suspenseful, labyrinthine, and brilliantly cast, The Maltese Falcon is one of the most influential noirs – as well as a showcase for Humphrey Bogart at his finest.”

The Maltese Falcon will be screened at Rave Cinemas Davenport 53rd 18 + IMAX at 3 and 7 p.m. on January 24, and at 7 p.m. on January 27. For more information on the 80th-anniversary presentation, visit Cinemark.com, and for more on the seventh-annual TCM Big Screen Classics series, visit FathomEvents.com.