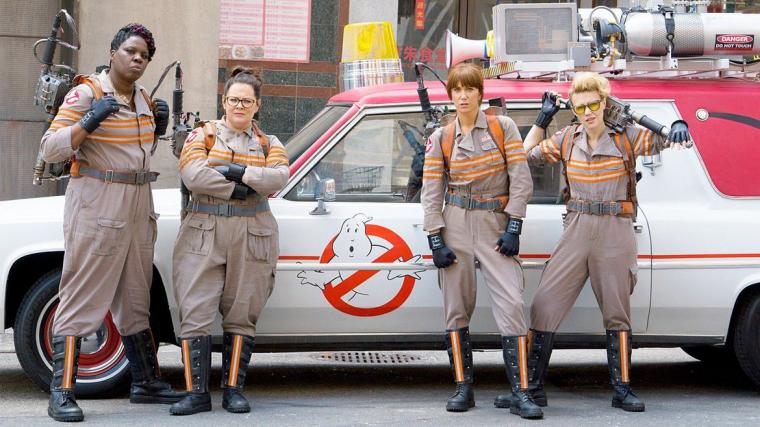 Haters, as we all know, gonna hate. So there was probably no way the new Ghostbusters was ever going to win over the trolling Internet fanboys convinced that director Paul Feig’s female-led reboot – a nuclear bomb aimed directly at their childhood memories – was the end of civilization as we’ve known it. What consequently saddens me is that the movie spends so much time sucking up to those guys. While watching Feig’s latest, it’s easy to forget about the film’s underwhelming, dare-I-say-dreadful trailers, as the work in full is frequently very funny. But it’s also exhausting, because hardly a minute passes in which you’re not reminded of the Ghostbusters legacy – Ivan Reitman’s 1984 original, sure, but also the tired “controversy” surrounding its new presentation. All told, this might be the most simultaneously apologetic and defensive Hollywood blockbuster I’ve ever seen.

Let’s ignore the specifics of its supernatural narrative, partly because they don’t matter, and partly because even if they did, I didn’t understand them. (During one three-minute, joke-free sequence of our heroines discussing spiritual planes and lines of intersection and such, I was so lost and bored that I found myself literally composing a mental shopping list.) All you really need to know is what the haters already knew: Melissa McCarthy, Kristen Wiig, and Kate McKinnon play variants on the scientists previously played by Bill Murray, Dan Aykroyd, and the late Harold Ramis, and Leslie Jones takes over for Ernie Hudson. The intentional ’84 echoes, of course, begin right there, because although Jones is much funnier than Hudson, it’s impossible not to notice that the one performer of color in Ghostbusters’ central quartet is again the one with the least amount of scientific know-how. (Jones’ Patty is at least given a career as a transit worker, as opposed to Hudson’s Winston, who ... . Wait, what was his job again?) But those hoping that Feig – one of the brightest comic minds in the business – might find other ways to make this big-budget comedy his own will wait mostly in vain, because we’re not only constantly reminded of Reitman’s film; we’re reminded of the inherent folly in replicating it.

Ray Parker Jr.’s embarrassingly catchy theme song gets an early shout-out at the exact moment you expect, with an inevitably lesser, more hip-hoppy version popping on the soundtrack halfway through. We revisit the original Ghostbusters’ beloved fire station, only to quickly depart when the new crew can’t afford the $21,000-per-month lease. (Admittedly, that’s a not-bad gag.) Wiig gets slimed, like Murray, and bangs on the windows of a fancy restaurant, like Rick Moranis. That turd-shaped, hot-dog-gobbling entity shows up, as does the Stay Puft Marshmallow Man. And through it all, we watch as TV commentators ask themselves just who these spirit-chasing dimwits think they are, and hear criticism from anonymous Internet posters, one of whom, as relayed by Wiig, insists, “Ain’t no bitches gonna hunt no ghosts.” (Among the online vitriol I’ve read regarding Feig’s movie, that’s actually one of the tamer comments out there.) Even when a TV-newscast wag dubs our team the Ghostbusters and the public follows suit, Wiig’s Erin backpedals, telling everyone no, sorry, it’s just a mistake, that’s not what we’re called. So are these women going to take ownership of that name – and by extension this franchise – or aren’t they? They eventually do, but I wish they could’ve done it without the borderline-oppressive cameos of the original’s main cast – excepting, naturally, Ramis and the eternally MIA Moranis – who are clearly here to provide a figurative stamp of approval. (As fun as it is to see them, their collective presence feels like a distracting F-you to the haters: “Nyah nyah, we got Murray!”) And I also wish they could’ve done it without replicating its predecessor’s most damaging flaw: the overbearing final half hour in which even the most clever one-liners tend to get lost in an effects-heavy melee. Granted, the skyscraper demolition is even more impressive here than it is in, say, Independence Day: Resurgence, but I don’t go to a Ghostbusters movie for that.

I do, though, go for laughs, and to a large and largely unexpected degree, I got them. McCarthy and Wiig do their traditional McCarthy and Wiig things, which is only a tad disappointing; they may be performing in their comfort zones, but those zones are generally hysterical places to be. (McCarthy’s at her finest kvetching with the Chinese-food delivery man who never gets her order right, and Wiig is a riotously terrible flirt in her scenes with Chris Hemsworth, who’s a total stitch as the women’s moronic-beefcake assistant.) Feig, as is his habit, peppers scenes with hilarious performers, and there are memorable brief turns for Ed Begley Jr., Andy Garcia, Cecily Strong, Steve Higgins, Nate Corddry, and Zach Woods, whose haunted-mansion tour guide opens the film on a fantastically droll note. (“And this is the room where P.T. Barnum first decided to enslave elephants!”)

Best of all, however, is McKinnon, whose para-techie Holtzmann is easily one of the most original comic figures of the past decade: a quite-possibly-mad scientist smart enough to create state-of-the-art weaponry yet silly enough to goad a ghost by singing “Come out, come out, wherever you are” in the voice of Glinda the Good Witch. At one point, upon seeing the hearse that will serve as the her team’s transport, Holtzmann deadpans, “I can think of seven good uses for a cadaver today.” Leaving Ghostbusters, I wanted nothing more than to see McKinnon make use of one in seven sequels.