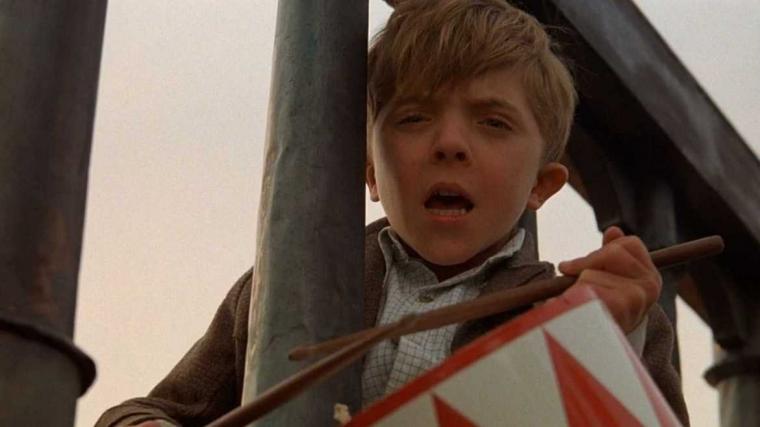 In the latest presentation in the Kinogarten series of German works screened on the first Friday of every month, Rock Island's Rozz-Tox and Davenport's German American Heritage Center co-host an outdoor May 7 showing of The Tin Drum, the dark dramatic comedy from 1979 that became the first movie from Germany, or in German, to win the Academy Award for Best Foreign Language Film.

The protagonist of The Tin Drum, Oskar Matzerath, is a very unusual boy. Refusing to leave the womb until promised a tin drum by his mother Agnes, Oskar is reluctant to enter a world he sees as filled with hypocrisy and injustice, and vows on his third birthday to never grow up. Miraculously, he gets his wish, and as the Nazis rise to power in Danzig, Oskar wills himself to remain a child, beating his tin drum incessantly and screaming in glass-shattering protest at the chaos surrounding him. Director Volker Schlöndorff's film was mostly shot in West Germany, with some street scenes, particularly ones concerning the landmarks of Danzig, shot in Gdańsk. The Polish communist authorities, however, gave the crew little time in Poland, considering the Gunter Grass novel that the movie was based on had long been banned in Eastern Bloc countries.

Among The Tin Drum's numerous laudatory reviews that landed after the film's 1979 release, Vincent Canby of the New York Times called it "a seriously responsible adaptation of a gargantuan novel," adding that "because the story it tells is so outsized, bizarre, funny, and eccentric, the movie compels attention." Gene Siskel of the Chicago Tribune gave the film four out of four stars and called it "quite shattering" with "one striking image after another."And Charles Champlin of the Los Angeles Times declared that it was "like few films since Citizen Kane – a combination of stunning logistics and technique and of humanistic content that is terrifically affecting." In addition to its eventual Best Foreign Language Film statuette at the 1980 Academy Awards, The Tin Drum was jointly awarded the Cannes Film Festival's Palme d'Or in a tie with Francis Ford Coppola's Apocalypse Now, making Schlöndorff's achievement the first movie directed by a German to receive the festival's grand prize.

The Tin Drum, which will be presented in German with English subtitles, will enjoy a socially distanced outdoor screening at Rozz-Tox on May 7 beginning at sundown or 8 p.m. (whichever comes first), guests are required to wear masks, and food and beverages will be available for purchase. The screening itself is free, and more information on the Kinogarten film series is available by visiting RozzTox.com and the German American Heritage Center at GAHC.org.