They Get the Job Done: “Hamilton” 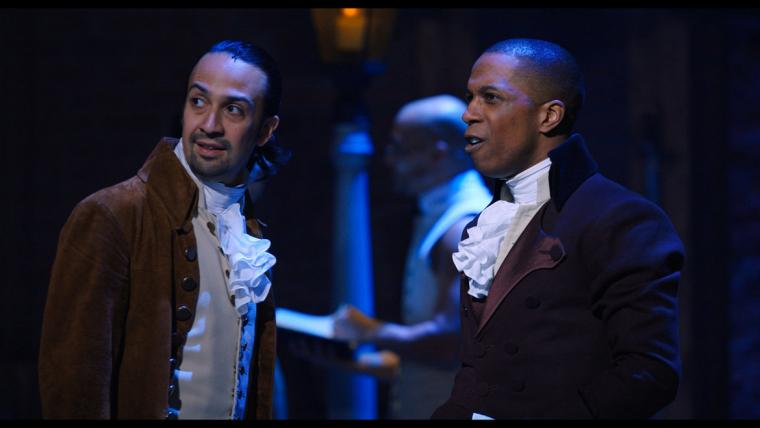 We may as well start with the spittle.

Unless you've been living in a sensory-deprivation chamber for the last several months – and I suppose, in some respects, most of us have – you probably know that Lin-Manuel Miranda's Pulitzer Prize winner and Tony Award hog Hamilton premiered on Disney+ this past Friday, more than a year ahead of its initially scheduled debut. You likely know that the show traces the earliest days of the USA with particular emphasis on Alexander Hamilton's life and career: his speedy ascent into George Washington's favor; his appointment as America's first Treasury Secretary; his cabinet battles with Thomas Jefferson; his death-by-duel at the hands of Aaron Burr. You no doubt also know that Manuel's hip-hop/pop musical sensation finds Black and Latino performers assuming the roles of our founding fathers – casting that's far more than a stunt, as it effectively reminds us that every American, regardless of race, has an equal, inclusive right to history. As the lyric goes: “Who lives, who dies, who tells your story?” Hamilton's answer is: We all do.

Yet unless you watched Disney+'s cultural phenomenon this weekend among untold millions of others (roughly half of whom seemed to post praise for it on my Facebook wall), you may not know that this movie by the New York rendition's Tony-winning director Thomas Kail isn't technically a movie at all. Rather, it's a performance of the Broadway show captured in the summer of 2016 with its original staging and unimprovable cast intact. As such, and despite its fluid camerawork and occasional overhead shots reminiscent of those employed for old Esther Williams water ballets, this Hamilton isn't a traditional film so much as captured live theatre. Which means we're not spared the occasional sights of sweat, body mics, the orchestra's conductor waving his baton, and spit. Lots and lots of spit.

Which brings us to Jonathan Groff. One of the show's few white performers, Groff plays what has to be considered one of the whitest stage roles of all time: England's King George III, who, here, sings three lyrically distinct variations on the tyrannical comedy number introduced as “You'll Be Back.” (Sample lyrics from Groff's third pop-in as George: “All alone / watch them run / They will tear each other into pieces / Jesus Christ this will be fun!”) Filmed theatre always comes with specific limitations – primarily, as an audience, the losses of immediacy and electricity powered by being in the same physical space as those entertaining you. Yet one of filmed theatre's greatest perks can be the employment of closeups, and whenever Groff sings, Kail tends to keep the camera intensely close to the actor's face, allowing us to witness George's every subtle emotional shift. It also lets us witness stage performance as we're not necessarily meant to, and as social media has roundly decreed this past weekend, Jonathan Groff is a spitter. A massive spitter. In his first number as George, the bubble of drool that rests just off George's lip is nearly as large as his powdered wig.

Although Groff, as usual, sings like the stage god he clearly is and is fantastically funny besides, that healthy gob of saliva is a repellant sight – and I wouldn't have traded it for the world. Silly hair, an unnatural complexion, a despot literally foaming at the mouth to get his hateful messaging across … . It's not like we're all not used to this stuff by now. But while I experienced the feeling at several points before Groff's first Hamilton appearance, and at loads of points after, what the intense closeups during “You'll Be Back” made me realize more than anything was that I f---ing miss live theatre. 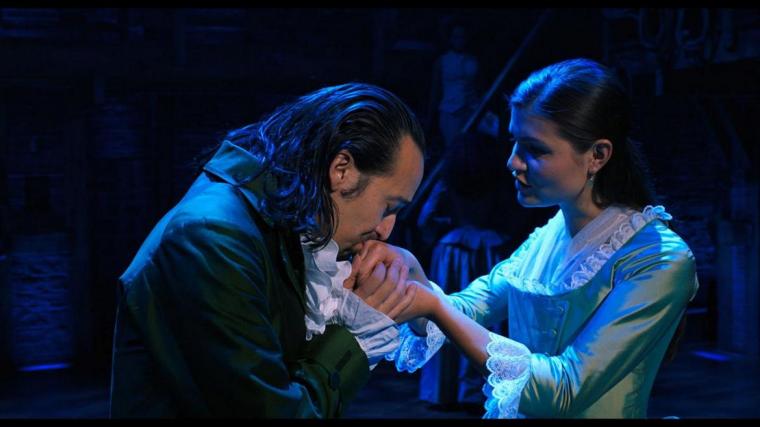 I miss the spit. I miss the sweat. I miss seeing and hearing those microscopic changes in focus and inflection that you'd think would get lost in a stage-production setting and yet, sometimes, magically don't. The stage show Hamilton isn't without its flaws. (The subject of slavery is bizarrely sidelined, and I tend to agree with Daveed Diggs' Jefferson when, after much time is spent on one of Hamilton's personal tragedies, he asks, “Can we get back to politics?”). Kail's Disney+ version isn't without flaws, either. (Especially in Act I, the gliding camera movements felt far busier than necessary.) But as a record of filmed theatre – especially considering Miranda's achievement is probably the greatest musical-theatre offering of the last 20 years – this Hamilton might have exactly zero peers.

As a film actor, Miranda, who plays the title role, can be a lot to take; with his eagerness to please and overt expressiveness, he's far more built for the stage. (Hamilton's disconsolate sadness after the death of his son left me dry-eyed, which, given how many times I've cried at the Hamilton recording, I totally wasn't expecting.) Yet his passion and humor and quick-witted hip-hop facility remain thoroughly inspiring over the Disney+ version's two hours and 40 minutes – and when Lin-Manuel Miranda is actually one of the lesser on-screen participants, you know that you've landed on something remarkably special. Because even disregarding the show's gorgeous lighting and Andy Blankenbuehler's fierce choreography and all those incandescent tunes and lyrics, lord almighty is Kahl's accomplishment rich in performance wonders.

It feels somewhat unfair to single out any of the production's specific acting talents, a feeling underscored by the beautifully egalitarian curtain call and the end-credits sequence that gives all of the cast members – even those credited as “Ensemble” – their own individual title cards (alongside the performers' lovingly hand-drawn likenesses). But still, among those who also display unimpeachable vocals: Leslie Odom Jr. as the conflicted, blithe-until-he's not Burr; Renée Elise Goldsberry as the sister-in-law Angelica who will forever love Hamilton from afar; Christopher Jackson as the stubborn, paternal, understandably lionized George Washington; Phillipa Soo as Eliza Hamilton, the prototypical “long-suffering wife” whose quiet heartbreak affects me on perhaps a deeper level than anyone else's. (I am zero-for-100 at not crying during her Act II reminiscence about the orphanage, a stat this movie didn't alter in the least.) And, of course, that mesmerizing force of musical-theatre nature Daveed Diggs, whom you'd be happy to have stay in character as the heavily accented Marquis de Lafayette if it wouldn't mean losing him, in Act II, as the thunderously exciting, rap-battling, mic-dropping Jefferson.

This is probably the moment in which I should mention that I don't, at present, have a Disney+ subscription – that some very kind friends invited me to see Hamilton as a special Independence Day weekend treat this past Friday. But I might subscribe now, and the availability of Miranda's and Kail's miracle of filmed theatre is reason enough. Jesus Christ is this thing fun.