They Got Them Babe: “Palm Springs” 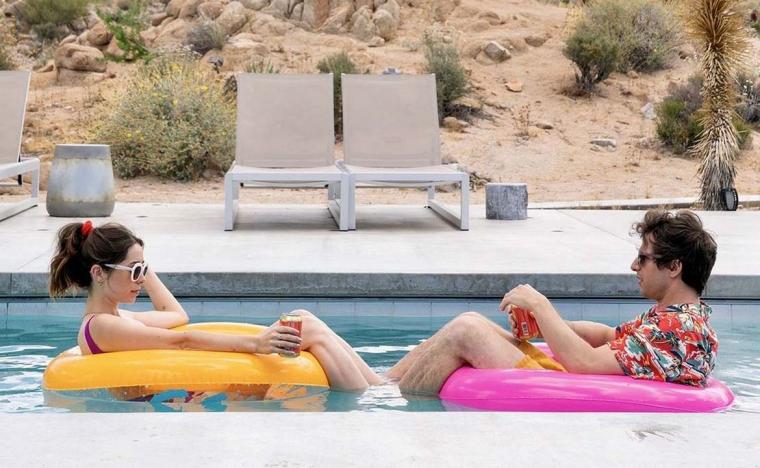 Released this past Friday on Hulu and at nationwide drive-ins including our area's outdoor venue in Blue Grass, the romantic comedy Palm Springs isn't set during the pandemic, and certainly wasn't filmed during it. Written by Andy Siara and directed by Max Barbakow, this debut feature for both actually premiered at January's Sundance Film Festival, where it sold to Hulu and the indie production company Neon for a reportedly record-breaking $17.5 million ... and 69 cents. (That spare change feels like an off-color inside joke by producers Akiva Schaffer, Jorma Taccone, and Palm Springs co-star Andy Samberg, the longtime friends who compose the Emmy-winning, Grammy-nominated sketch-comedy team The Lonely Island.)

But while Siara, Barbakow, and the rest couldn't possibly have foretold the global health crisis we're currently enduring, damned if their fiercely funny, inventive, thoughtful, and affecting release doesn't feel like the first movie comedy designed specifically for the pandemic era: a spiky yet empathetic commentary on modern life and modern romance in which “modern,” for once, genuinely means “this exact moment right now.” For roughly the first 20 of the film's intensely speedy 90 minutes, you may feel you've seen it all before. (Which, as the plotting makes evident, is very much the point.) As the central relationship between Samberg's Nyles and Cristin Milioti's Sarah develops, however, you realize that as much as Palm Springs is about them, it's also about you, about us – about our collective sense that nearly every day post-COVID has felt, frustratingly but not always excruciatingly, just like the day that came before. It's you deciding what to do with that day that makes it distinct. And the hardest part, sometimes, is deciding, wanting, to do anything at all.

From the movie's start, and for what will prove to be vastly different reasons, Nyles and Sarah both appear to have given up. Nyles wakes on the morning of November 9 looking bored and dejected, and after some halfhearted sex with his girlfriend Misty (Meredith Hagner), the pair drives off to an outdoor Palm Springs wedding for which Misty is a bridesmaid. Sarah, the bride's older sister and maid of honor, attends the ceremony looking distracted and depressed, demanding that the bartender fill her glass of cheap red wine to the brim. By this time, Nyles, dressed in cargo shorts and a loud Hawaiian-print shirt, is already notably drunk himself, and catches Sarah's eye through his brazenness, apparently equal disinterest in the nuptials, and odd ability to predict other guests' dance moves. The two tentatively flirt. They head to the beach. They begin to undress. And then, out of nowhere, a stranger attacks Nyles with an arrow to the shoulder, and then the thigh, and as the wounded man begs Sarah not to follow him, Nyles crawls into a strangely illuminated cave where … .

Okay. So if you haven't yet seen the film or its narrative-revealing trailer, this is the moment in which I plaster “SPOILER ALERT!!!” on the rest of the review and ask you to check back in after you're sufficiently spoiled. Because after Nyles drags himself into that iridescent orange glow, we return to the morning of November 9 where the day's events begin anew for Nyles … and also for Sarah, who ignored Nyles' plea and accidentally entered the same space-time continuum that he did so many days/weeks/months/years/eons ago. That's right, folks: It's Groundhog Day – or Happy Death Day, or Edge of Tomorrow, or Before I Fall – all over again.

As opposed to those works, however (though not unlike the fabulous, onion-peeling Netflix series Russian Doll), Palm Springs provides company with the misery. Instead of one person experiencing the endless-loop conundrum as an existential dream from which there's no waking, Nyles gets to share his dilemma with Sarah, who's understandably incensed by the circumstances. He also, we learn, shares it with Roy (J.K. Simmons), the vengeful stalker with the bow and arrow. Late in the film, there's also a subtle suggestion that at least one other wedding guest has been to the cave, but for now, we've already got plenty on our plate. 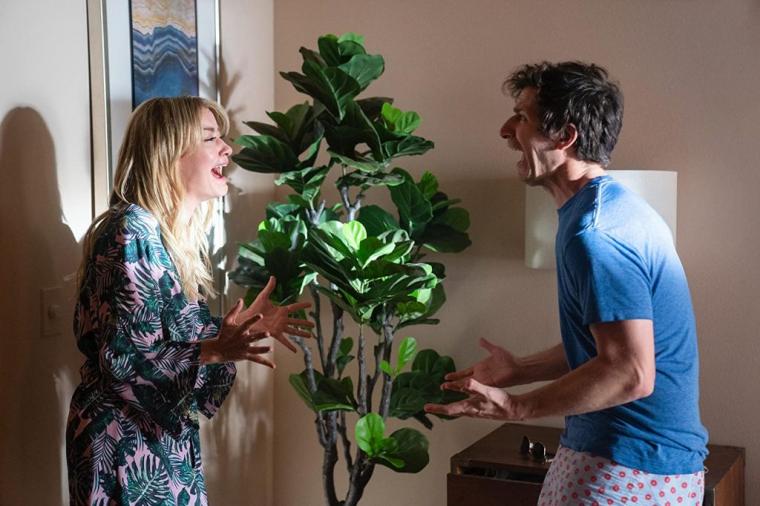 For the movie's comedic and melancholic purposes, that co-opting of the crisis makes all the difference. When Bill Murray's Phil Connors woke every morning to Sonny & Cher crooning “I Got You Babe,” the laughs, pain, and eventual acceptance came from his inability to communicate his plight with anyone else; the weatherman may have eventually made friends and become a better person, but no one else would ever know precisely why. This film, though, presents us with a trio of characters trapped in the exact same metaphysical boat – and shouldn't that be more bearable than being trapped there alone? Palm Springs' subversive answer is: Not necessarily. Yes, after many slapstick attempts at reversing their situation, or at the very least killing themselves, Nyles and Sarah begin to accept their impossible scenario, and, when they're not evading Roy's wrath, even have some fun with it. (A nearby watering hole and that outdoor reception provide the makings for some excellent routines that horrify the onlookers.) But the movie asks a fundamental question that Groundhog Day and most of the rest of its looping ilk couldn't: What if every day you lived was not only entirely similar to the one before, but spent with someone – even someone you loved – who was aware of, and not entirely happy with, the endless repetition, too?

We first meet Nyles at the point roughly equivalent to where Phil was an hour into the Murray comedy – blithely wasted and profoundly Over It – and Sarah is the one who follows the full Groundhog Day trajectory from initial discovery onward. It's when the two finally get on the same page, at first triumphantly and then more or less comfortably, that Palm Springs reveals itself as a potential pandemic-era classic. Lounging in a strangers' pool in their floating air cushions, this accidental couple isn't doing anything, can't do anything, to escape their circumstances … just like all of us trapped either alone or in another person's company during these many months of shutdown. But the closer our romantic protagonists get to each other, the more that a degree of Stockholm syndrome sets in for Nyles – he starts to relish the sameness with Sarah, the adherence to routine, that might vanish if they were ever able to get to November 10. She, in contrast, needs to grow, and wants Nyles to grow with her. How does a relationship survive when one partner is content to have things stay forever as they are and the other is increasingly desperate for change? How do we learn to either live with or escape forces absolutely beyond our control? And are both options, in the end, better explored alone?

Such are the weighty themes that Siara and Barbakow introduce and grapple with here, and so it's sort of miraculous that Palm Springs is as abjectly fun as it is, with Samberg peppering his friendliness and comedic elasticity with devastating sadness, Milioti (she of the saucer-shaped eyes and wicked timing) equally adept at poignancy and epic comic meltdowns, and Simmons granted a heartbreaker scene demonstrating the occasional blissfulness and debilitating regret of a life lived on a hamster wheel. The movie could have used a more fully rounded roster of supporting figures; while talents such as Peter Gallagher and Dale Dickey are amusing, only June Squibb, in her too-brief appearances, is given much to chew on. And the ending, satisfying though it is, is a bit too convenient and undernourished. Yet the movie remains a colossally enjoyable time, and it was shrewd of Neon and Hulu to release it at drive-ins and on TV simultaneously, offering options for those aching to leave the house and those more than content to stay home. The streaming availability seems especially apt, because even if you have no interest in reliving the same day repeatedly, you can at least watch Palm Springs as many times in a row as you want.