No Longer Quiet on the Western Front: "They Shall Not Grow Old," "The Least of These: The Graham Staines Story," and "Miss Bala" 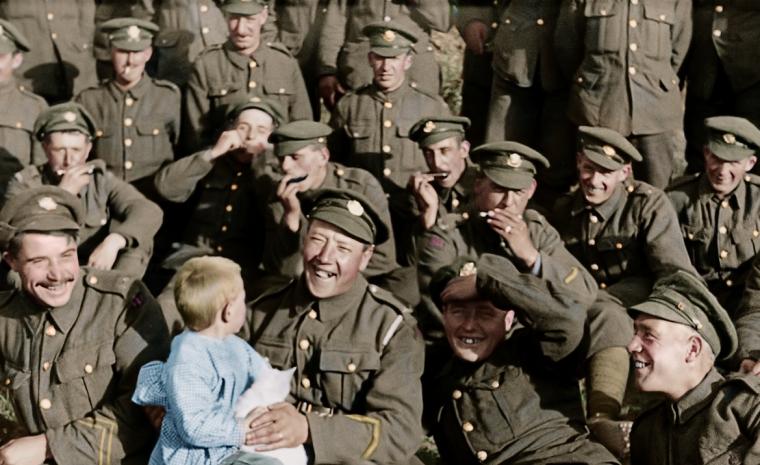 They Shall Not Grow Old

THEY SHALL NOT GROW OLD

Culled from more than 100 hours of documentary footage from more than 100 years ago, Peter Jackson's World War I documentary They Shall Not Grow Old is an almost unquestionably astounding achievement – and not just because what began as a two-day special engagement in December made so much money, and was so beloved by patrons, that it's currently enjoying a full, and fully deserved, theatrical run.

As the director himself tells us in his introduction to the film, Jackson was commissioned, in 2014, to make a movie in celebration of the Armistice's 2018 centennial, with the only caveat being that he create something “unique and original.” Well, Jackson and his extraordinary technical collaborators have most certainly done that, taking newsreel footage from the era and adjusting the speed of its frame rates, adding color and sound, and accompanying the footage with voice-over reminiscences by dozens of former WWI combatants who explain, in sometimes wrenching detail, their day-to-day experiences before, during, and after their tenures on the Western Front. What results is nearly 100 minutes (not including Jackson's charming intro and spellbinding making-of documentary that follows the end credits) of true cinematic submersion – a work that brings the Great War to life on-screen in deeply moving and wholly unprecedented ways. They Shall Not Grow Old is a visual and aural marvel. It's frequently glorious. It's borderline miraculous. And it's also, unfortunately, just a li-i-ittle bit tedious.

Unexpectedly, it's the movie's claim to fame – the painstaking restoration of Western Front footage – that proves to be its biggest stumbling block, though certainly not at first. Before we're drawn into battle by Jackson and his serviceman narrators (whose recollections were recorded by the BBC in the 1960s and '70s), They Shall Not Grow Old opens in black-and-white in the square 4:3 film ratio of the period, acclimating us to life in 1914 England just before the war's outbreak. We stay in this ratio as soldiers tell of their voluntary enlistment – many of them revealing that they signed up despite being years younger than the legal enlistment age of 19 – and we listen as they describe, with accompanying footage, their six weeks of training in all of its mundane detail. What was banal to them, though, is fascinating to us, and Jackson's film is maybe at its most engaging in these early scenes as we learn how uniforms were distributed, and precisely what was stored in a kit bag, and why the majority of their training was dedicated to marching in heavy and usually ill-fitting boots. Because the soldiers' reflections are so comprehensive yet so wryly, amusingly matter-of-fact, you begin to feel that despite the astonishing newsreel footage, Jackson's doc might have worked just as well as a radio drama. But then, in a goosebump-inducing moment that's like Dorothy first entering the Land of Oz, the ratio slowly expands to full-screen and the black-and-white morphs into color, and the boxy, silent, sped-up world familiar from WWI films becomes a place we've literally never seen this way before. 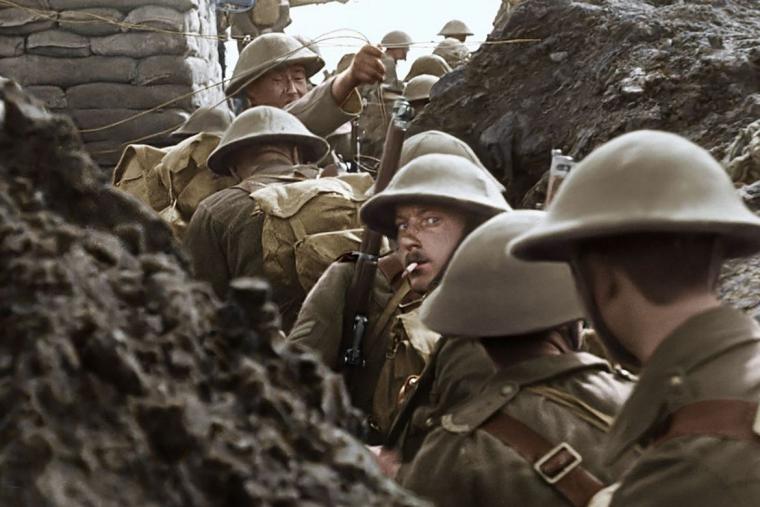 At first, and for a long while afterward, the effect is amazing, if a little off-putting. Because we know going into They Shall Not Grow Old that colorization is part of the point, we can't help but notice when the visual updating seems a bit off, the way it does when you're watching a colorized, TNT version of some black-and-white classic you loved as a child. We really don't have any cinematic frame of reference for a World War I in color, and so the greens initially seem too green, the skies too blue, the troops' clean-shaven complexions too smooth and ruddy. Eventually, though, we adjust, and the sublimely re-created sound effects – everything from explosions to soldiers trudging through mud to rats feasting on the deceased – do wonders in providing you-are-really-there authenticity.

What's harder to adjust to, however, is the presentational sameness of the Western Front material. Due to the inherent dangers of combat and the fact that the documentary footage was used primarily as newsreel propaganda for homefront audiences, it's perfectly understandable that we aren't given much in the way of battle footage; generally speaking, such footage doesn't exist. (Soldiers had more than enough to contend with without civilian photographers getting in their way.) Yet while Jackson and his team have clearly labored to give largely stationary images the impression of movement via newly fashioned pan shots and wise editing choices, you can't ignore how similar it all starts to feel: one soldier after another, seemingly hypnotized by the camera, staring at us while we stare at them, and only occasionally breaking the standstill through some off-camera directive or the flash of a toothy grin. (I can't be the only viewer who, marveling at the collective lack of orthodontic care, immediately recalled The Simpsons' nightmarish Big Book of British Smiles.) While the narrators' remembrances remain enthralling and the restoration process is applause-worthy, there's still not quite enough going on visually; you can admire the film to no end and still find yourself fighting the urge to nap.

What keeps you from doing so, though, are the soldiers' voices – and even their faces in all of their colorized, frequently hypnotized splendor. It's not often that you see a documentary in which you know that every single person you're viewing and hearing on-screen is deceased, and that knowledge assists in making Jackson's achievement both tremendously powerful and almost ineffably sad. On more than a few occasions, I was brought to tears merely by the image of some too-young solider doing his best to look steadfast and brave. And when the colorization and widescreen presentation ends and the film, for its finale, returns us to the black-and-white of 1918 England, your heartbreak grows exponentially in being reminded, yet again, of the staggering challenges troops face upon returning home from combat. For our They Shall Not Grow Old brigade, that includes returning to widespread unemployment, crippling despair, and a society that had no interest in asking about, or even hearing about, the soldiers' experiences. To our great benefit, though, Peter Jackson asked, and demanded that we hear. His documentary may not be perfect, but it's absolutely unmissable – the hellishness of war re-created by a heaven-sent filmmaker. 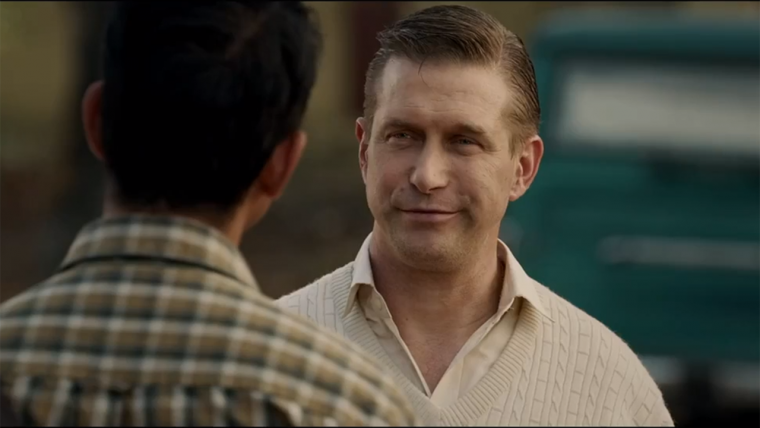 THE LEAST OF THESE: THE GRAHAM STAINES STORY

The benefits of a great, real-life tale are enormous, and that truism is severely put to the test in director Aneesh Daniel's The Least of These: The Graham Staines Story, a movie that you keep wanting to like more than its presentation allows. With Daniel's film set in the late 1990s, its title character is an Australian missionary who leaves his home continent to tend to leprosy patients in India, a move that causes local power-holders to believe that the man is actually there to convert the sick to Christianity. An Indian journalist (Sharman Joshi) is consequently sent to uncover the truth, but in all honesty, it was hard to tell if the missionary was being investigated because of potential illegal activities, or because he was being played by Stephen Baldwin, an actor who, in middle age, now reeks of bored duplicity, and who resembles a version of his more famous siblings who's slowly melting. (This Staines also deserves to be investigated for his barely-there attempt at an Australian accent, which pretty much ends with Baldwin's decision to pronounce “mate” as “mite.”)

It's a largely hapless film, with the overbearing score constantly working our nerves, the staging rudimentary, the dialogue looping frequently painful, and the beats in the conversational pauses so profound – mostly due to the editing – that it's like being at a depressingly earnest play in which everyone on-stage seems to have just memorized their lines. Yet its story, thankfully, is an engrossing one, and a worthy one in exploring a hideous atrocity of which too few of us are likely aware. There's also quite a bit of lovely lighting courtesy of cinematographer Jayakrishna Gummadi, and Joshi is a sympathetic, consistently friendly presence, never more winning than when ending a threatening tirade with a soft, kind adieu and his palms pressed together. The Least of These: The Graham Stained Story may be lacking in most regards, but it could certainly teach a lot of us the proper way to end a fight. 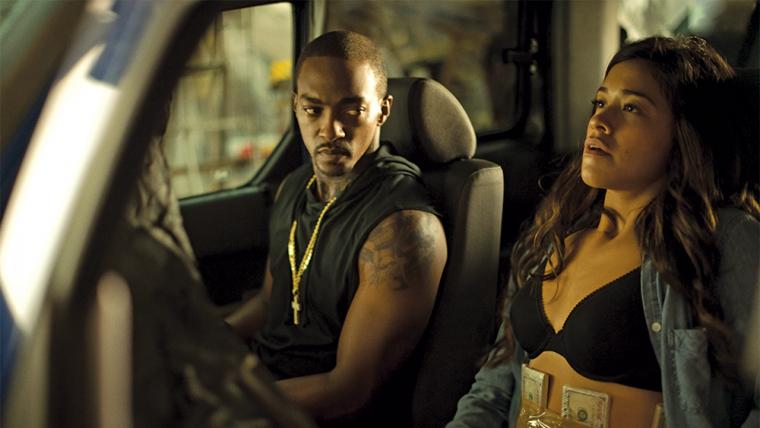 If you watch enough movies, you start to feel as though you've seen every possible title card under the sun. So it came as something of a surprise to be sitting through the opening credits of director Catherine Hardwicke's action thriller Miss Bala and come upon a title card almost monastic in its plainness: “Based on the Spanish-language film.” No mention of a title (that would also be Miss Bala), no country of origin (that would be Mexico), no “written by” (that would be Mauricio Katz and Gerardo Naranjo, the latter of whom also directed) – just “Based on the Spanish-language film.” It almost felt like a preemptive suggestion to audiences: “You know, you could just go home and rent the original instead … .” An hour-and-a-half later, I kind of wished I had.

Although I haven't seen Naranjo's 2011 release, reviews indicate that it's a bleak, tough-minded exploration into the impacts that trafficking and money laundering have had on law-abiding Mexican citizens, told through the horrific experiences of a kidnapped beauty-pageant contestant forced into working for a drug cartel. Even if you didn't know that the new Miss Bala was a remake, though, it would feel exactly like a typically dumbed-down Hollywood version of that movie. Nothing about the film is terrible, exactly. Hardwicke stages the genre-demanded shoot-outs and car chases with a bit of flair, and also delivers some satisfyingly outré PG-13 violence, as when a loathsome DEA agent winds up on the receiving end of a handheld missile launcher. She's also fortunate enough to have the bewitching Gina Rodriguez as her lead, and the Jane the Virgin star is hands down the best reason to see the movie, lending the proceeds her customary naturalism and empathy, and looking so smashing in a blood-red gown that you can almost ignore the machine gun she happens to be toting. But this Miss Bala is still a contrived, achingly clichéd outing filled with the usual Mexican-druglord stereotypes, and even the humiliations that Rodriguez suffers – such as having her derrière routinely grabbed by sweaty men with thick mustaches – aren't enough to make us root for the film's unconvincing leap into empowerment (and potential franchise) territory. Esta Bala es mala.