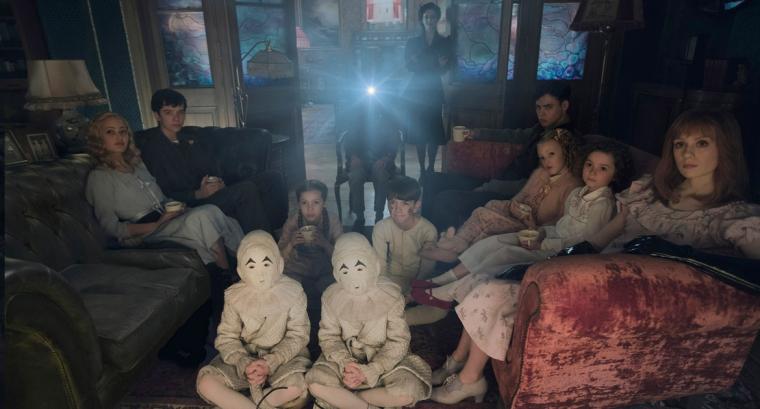 In the past, and on more than a couple occasions, my editor has referred to me as “a Tim Burton apologist,” a moniker that I think came about after I had the temerity to enjoy 2001’s Planet of the Apes. But even though I’ve had more fun than most at releases including 1999’s Sleepy Hollow and 2012’s Dark Shadows, I’m a little surprised the sobriquet has stuck, considering how so much of the filmmaker’s oeuvre should require apologies from Burton himself. Big Eyes? Charlie & the Chocolate Factory? Alice in freaking Wonderland?! These are titles I’m hoping never to sit through again, and would be equally happy to go the rest of my life without repeat visits to Big Fish and Sweeney Todd and the 1989 Batman.

Yet here I am confronted with Burton’s latest, Miss Peregrine’s Home for Peculiar Children, and it looks like I may have to wear that apologist tag for a little while longer. The movie is an almost unquestionable mess, overstuffed and overplotted and sometimes downright incoherent. It also, however, boasts so many delightful Tim Burton flourishes that I still wound up having a pretty great time. My happiness dissipated not long after the end credits rolled, but when Eva Green was taking hearty puffs on her pipe, and invisible monsters were being attacked with cotton candy and Gummi worms, and Samuel L. Jackson was feasting on a bowl of human eyeballs, it was something close to Burton-ian paradise.

Adapted from a book in the YA-lit series by Ransom Riggs, Peculiar Children is a tale of World War II folklore, time travel, wormholes, and the deadening effects of life in suburban Florida, but it’s probably best, and certainly simpler, to just think of it as a J.K. Rowling take on an X-Men movie. Asa Butterfield stars as Jake, a depressed modern teen who, following the cryptic last words of his grandfather (Terence Stamp), convinces his divorced dad (Chris O’Dowd) to take him to Wales to uncover the truth behind Grandpa’s murder. Through a tear in the fabric of the universe, or something, he winds up at a 1943 orphanage run by the titular Miss Peregrine, a headmistress with an insistence on punctuality, the abilities to repeat time in 24-hour loops and morph into a bird, and glass-cutting cheekbones that could only belong to portrayer Eva Green. All of her “peculiar” children have superhuman powers – among them the gifts of flight, re-animation, and pyrokinesis – and are in hiding from hideous blind creatures called Hollows who have blades for arms and tentacles in their throats. Can Jake save his new friends from their grotesque pursuers? Can he successfully make it back to 2016 America? And can anyone make heads or tails of the narrative gumbo that is this movie’s storyline? Short answers: yes, yes, and probably not. But at a certain point, I gave up trying to understand Peculiar Children’s goings-on and chose to instead just marvel at the demented spectacle of it all. Like most of the director’s admirers, and those who used to be admirers, I miss the giddy, anything-goes comic insanity of Pee Wee’s Big Adventure and Beetlejuice, and with the possible exception of Mars Attacks!, Burton’s latest is as close as we’ve gotten to those cherished ’80s oddities. The man’s timing isn’t as sharp as it once was, and the early scenes in Florida are particularly flabby, even with talents such as O’Dowd and the gravely underused Allison Janney and Kim Dickens there to theoretically lighten the load. After we land at the orphanage, though, there’s almost no end to the visual wonders on display. Some of them are gloriously crude, such as the battle royale between a pair of ambulatory dolls with Edward Scissorhands appendages, and – in a magnificent nod to stop-motion legend Ray Harryhausen – the sequence involving a cadre of warring, re-animated skeletons. Others have a haunting, otherworldly loveliness: the large-eyed Emma (Ella Purnell) floating upward to replace a fallen squirrel from its nest; fellow orphan Horace (Hayden Keeler-Stone) hosting movie night by projecting his dreams onto a screen.

Yet the majority of the film’s eye-catching effects are of the scary/funny variety, and at its best Burton’s frequently unsettling family flick catches you in that off-guard place between cackling and shrieking – kind of like how you felt the first time you saw the true visage of Large Marge in Pee Wee’s Big Adventure. Jackson, with his milky contact lenses and fanged teeth, is suavely sinister as the Hollow leader, yet not so single-mindedly perverse that he can’t slip in a cutting barb at Florida’s expense. (Perhaps because it’s so easy to do.) Out of human form, the Hollows themselves are sensationally eerie figures, as are the orphanage twins who cover their faces with masks that remind you of 2008’s The Strangers, and whose shared power is kept a secret until the very end. (It’s worth the wait.) And while the singular snap of early Burton may be lost to us forever, the guy can still deliver a high-comic jolt when he really puts his mind to it; I was admittedly surprised to see Dame Judi Dench enter the nut-job proceedings, but I was even more surprised to see her go. It’s in many ways a hodgepodge entertainment, but I’d still recommend giving Miss Peregrine’s Home for Pecular Children a shot. Apologies, boss. Has Kate McKinnon’s comic genius now reached such an apex that even three or four scenes with her are enough to make a movie worthwhile? Based on what she brings to director Jared Hess’ long-shelved Masterminds, I’d have to say not quite, but it’s a tough call.

A hillbilly slapstick, one based on actual 1997 events, that finds Zach Galifianakis’ doofus David Ghantt miraculously knocking off a North Carolina bank to the tune of $17 million, the movie continually stumbles and lurches, with numerous scenes appearing to have been chopped short before their punchlines had the chance to arrive. And while Galifianakis delivers some laughs with his exaggerated drawl and ridiculous hairstyle that can only be described as a Prince Valiant mullet, co-stars Kristen Wiig, Jason Sudeikis, and Owen Wilson are nowhere near as crazy as they needed to be, while talents such as Leslie Jones and Ken Marino are so ill-used that you wonder why they’ve even there. But every once in a while, McKinnon stealth-bombs this meandering, low-energy comedy as Ghantt’s passive-aggressive fiancée, and every time she did, I giggled to the point of tears. Playing her poker-faced harridan with grimly banal malice, dead eyes, and a “smile” that’s indistinguishable from a straight line, the riotous McKinnon makes you wonder just what would have resulted had everyone else in the wildly uneven Masterminds attacked their roles with similarly lunatic originality. She’s only topped in hilarity by the sight of a disguised Ghantt in an Edgar Winter wig and contact lenses the color of which is advertised as “anaconda,” and who, as he accurately states, consequently resembles what you’d get “if Jesus and a cat had a baby.” It was a busy cineplex weekend for lovers of scary-ass contacts in movies, but if pressed for favorites between these and Samuel L. Jackson’s Peculiar Children eyeball enhancements, I gotta go with Zach’s. Written by Jim Strause and directed by John Krasinski, The Hollars is an independent dramatic comedy about a frustrated graphic novelist who returns to his hometown – and the family he left behind – after his hospitalized mom is diagnosed with a brain tumor. In addition to Krasinski as the novelist and Margo Martindale as his mom, the cast features Richard Jenkins as his dad, Sharlto Copley as his brother, Anna Kendrick as his girlfriend, Charlie Day as his high-school rival, and Mary Elizabeth Winstead as his former high-school sweetheart. The script allows nearly everyone a scene of rueful melancholy followed by a scene of mood-lightening slapstick; long-held family secrets are revealed and hugs are administered in healthy doses; the soundtrack is peppered with acoustic guitar. And if, like me, movies of this Sundance-y ilk generally set off your involuntary gag reflex, be advised that The Hollars is easily the most unbearable example of its type since last year’s equally awful Me & Earl & the Dying Girl.

I was pretty sure I knew what kind of sickeningly precious quirkiness I was in for early on, when Jenkins and Copley erupted into a “funny” slap-fest over Martindale’s hospital bed. But I still wasn’t quite prepared for such prescribed adorableness as Kendrick playing a trust-fund baby who’s also a successful designer of pet clothing. Or Copley’s unbalanced stalker breaking into his ex-wife’s house so he can snuggle with their mixed-race children. Or Krasinski sneaking Martindale out of the hospital to fill her with ice cream and soda mere minutes after we’ve learned she’s a borderline-diabetic for whom sweets could cause a heart attack. And while I’ve seen what feels like dozens of similarly, insufferably twee “you can’t go home again” indie dramedies over the years, I truly never expected to see one in which a newly engaged woman goes into labor at a funeral, and requires Richard Jenkins and a hearse to get her to the hospital. (The last time the man was in one, in the Six Feet Under pilot, things didn’t go so great.) Given the cast, there almost can’t help but be some affecting moments, and Martindale, Kendrick, and especially Jenkins do deliver a few. But The Hollars is still a hellishly whimsical – or maybe whimsically hellish – chore to sit through. At one particularly noxious point, Martindale’s hubby and sons serenade the woman on her way to surgery. (Perversely, even though she’s right there, Kendrick isn’t allowed to join in.) The song? An off-key rendition of the Indigo Girls’ “Closer to Fine.” The movie itself ain’t even close.