The Too-Quiet American: "The American," "Going the Distance," "Machete," and "The River Is Life" 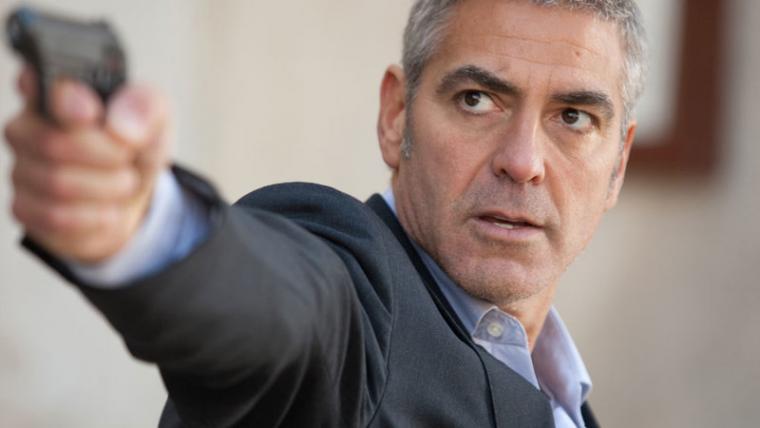 George Clooney in The American

There's so much that's impressive about The American that I feel somewhat guilty for briefly nodding off, twice, during the course of the film. But in my defense - and unlike the gentleman sitting in the row ahead of me - I'm at least reasonably sure I didn't snore.

My guess, though, is that even audiences who really like The American will find narcoleptic responses to the movie understandable, despite an incredibly promising opening that keeps you on edge for a good 15 minutes afterward. Set within and outside a secluded cabin in Sweden, the prelude to director Anton Corbijn's thriller begins with a blissful romantic tableau and ends in a shocking triple homicide, and between the director's elegant compositions, the unexpected brutality, and the ever-reassuring presence of George Clooney, you're primed to enjoy a smart, swift entertainment in the Bourne Identity mold. And you stay primed as the action moves to rustic Italy, where Clooney's inscrutable killer and firearms expert - alternately known as Edward, Jack, and "Mr. Butterfly" - hides from potential assassins, prepares for an arms sale with a mysterious blonde (Thekla Reuten), and awaits instruction from his even more mysterious employer (Johan Leysen).

Yet the damnedest thing happens once our enigmatic anti-hero holes up in his Italian hotel room: nothing. Or rather, nothing terribly interesting. Clooney stares out his window. He assembles weaponry. He does push-ups and chin-ups. He chats with a local priest (and by "chats with," I mean "listens to"). He enlists the services of a voluptuous hooker (Violante Placido) who falls in love with him. He receives cryptic phone calls. He does a few more push-ups and chin-ups. And through all of these beautifully shot, dramatically inert sequences, Clooney almost never varies his mask of Zen-like, mildly dyspeptic ennui; the effect is akin to watching Jason Bourne being played by a great-looking sleepwalker. (At one point, Placido says to Clooney, "You're acting strange," and he certainly is - he's acting, for perhaps the first time in the performer's career, as though being a movie star is no fun at all.) Based on the Martin Booth novel A Very Private Gentleman, The American - God help us - is designed as an existential action thriller, one in which tortured soul-searching substitutes for movement and impenetrable stares substitute for chemistry, and it only proves that entertainments of this sort are much better when you're kept alert through the constant reading of subtitles.

Audiences that, for mostly good reason, rail against the energetic mindlessness of typical Hollywood thrillers may well have a ball at the film, and it's by no means a bust. A climactic assassination attempt is staged and timed with hairbreadth precision, and Corbijn is sensationally canny about the use of sound and silence; he maintains such an eerie, foreboding sense of quiet that any loud interruption - be it a gunshot or the backfire of a passing Vespa - produces a satisfying jolt. And heaven knows that the movie, with its deliberate pacing and tempos, is thoughtful. It's just that "thoughtful" is the complete antithesis of "thrilling," and in the end, the handsomely produced, dispiritingly empty The American is too much like its introductory, Sweden-in-winter locale: chilly, remote, and all too devoid of color. Modern romantic comedies are generally plotted with such lame romantic hurdles - smarmy rivals, silly misunderstandings, the fact that one of the leads is a ghost - that one that finds its stars having to overcome a genuinely challenging obstacle can feel nearly revelatory. And while director Nanette Burnstein's Going the Distance is, in many ways, traditional to its core, it has the rare distinction of being a rom-com in which there actually appears to be something at stake; despite evidence to the contrary, you're never entirely convinced that the movie will climax with the requisite Happily Ever After. In the film, Drew Barrymore and Justin Long - a former off-screen couple who, in real life, did not enjoy a Happily Ever After - meet cute in New York, fall in love, and attempt a long-distance relationship after Barrymore returns to San Francisco; pretty standard stuff, especially once you add Barrymore's token Disapproving Sister (played, with biting wit, by Christina Applegate) and Long's token Slacker-Slob Buddies (the hilarious Jason Sudeikis and Charlie Day). But working from a strong, genially raunchy script by Geoff LaTulippe, Burnstein lends true gravitas and detail to the leads' cross-country conundrum. Stuck in thankless, low-paying jobs, Barrymore's and Long's characters are stymied by insufficient funds and mismatched schedules; without making a big deal of it, Going the Distance underscores the trickle-down effects of our current national financial crisis in ways that young-adult viewers, in particular, might find intensely moving. How do you keep a long-distance affair alive when you can't even afford a plane ticket? Its underlying seriousness might partially account for the film's rather dismal opening-weekend box-office performance, but here's hoping that the movie eventually finds the audience it deserves, because it's smart and funny and real, and the wonderfully charming Barrymore and Long share an easy, playful rapport. Like romance itself, Going the Distance is probably best entered with less-than-sky-high expectations. Do so, and you might exit the film experiencing a sensation that feels an awful lot like love. In one spectacularly disgusting sequence in Machete, our titular, taciturn hero (Danny Trejo) makes an escape by tearing into a villain's torso, grabbing his intestines, crashing through a window, and using the guy's innards as a rope by which to swing to safety. If the rest of this alternately grim and tongue-in-cheek revenge thriller were even half as clever as that inventive getaway, the movie might really have been something. Unfortunately, this bloody, pulpy endeavor by directors Ethan Maniquis and Robert Rodriguez only goes to demonstrate that some brilliant short-film inspirations - in this case, a faux trailer that Rodriguez helmed for the exploitation-flick tribute Grindhouse - are best left as brilliant short films. This marks editor Maniquis' first time behind the camera, but Rodriguez's "style" is fully evident here, meaning that Machete resembles nothing so much as a well-funded home movie; call what the co-director is doing here "intentional," but it's hard to appreciate routinely clumsy compositions and halfhearted attempts at tough-guy banter - "Where are you going?" "I'm going to take out the trash." - as "satire" when little about Rodriguez's oeuvre suggests he's capable of better than the '70s schlock he's "satirizing." (I've now seen 14 features directed or co-directed by Rodriguez. I've enjoyed three of them.) I'll admit that the film's wildly over-the-top showdown achieves a kind of B-movie grandeur, and Robert De Niro, Michelle Rodriguez, Cheech Marin, and Spy Kids' Daryl Sabara (a hoot as an adopted white boy trying to pass as Mexican) seem to be having some fun. But for most of its length, Machete is jokey without being particularly amusing. Watching Lindsay Lohan, in an aiming-for-schadenfreude role, portray a drugged-up whore just makes you feel queasy and sad, and someone really should've realized that giving Steven Seagal a hambone, Shatner-esque death scene would've been far more effective if his atrocious acting wasn't making you think back fondly on Shatner's hambone emoting. THE RIVER IS LIFE

The documentary adventure The River Is Life - which was screened at Bettendorf's Veterans Memorial Park on August 28 and will be shown again at Moline's Riverside Park on September 10 - finds filmmakers Phillip Hullquist and Ryan Jeanes, in an inflatable canoe, traversing the length of the Mississippi River from Minnesota to New Orleans. Along the way, they occasionally encounter rough weather and chat it up with the locals, and eventually, and with no fanfare, reach their destination. In dramatic terms, there's not much more to the movie than that, but The River Is Life is still more engaging than roughly four-fifths of what Hollywood has released in 2010. This effort by Hullquist's and Jeanes' 11 Visions production company only takes itself overly seriously in Jeanes' earnest narration, which features such platitudes as "The Mississippi means so much to so many people" - a sentiment that would carry more weight if it wasn't preceded by an interview with three (admitted) teenage vandals and thieves who deride their riverfront community of LaGrange as "kinda gay." Yet throughout the low-budget doc, our tour guides emerge as effortless, quick-witted comedians, friendly and curious, and they're casually, hysterically up-front about just how much "roughing it" they agree to take part in with their experimental voyage; one segment finds them bypassing a night on the river for a night in a motel with a hot tub, and don't expect the guys to fish or hunt for their food - not when there's a convenience store located a few miles from shore. (At least once, they order pizza from a river bank.) Local audiences should have a particularly fine time, what with the detour in Davenport's Cafe on Vine, and the footage from the annual Port Byron/LeClaire Tugfest, and the brief chat with Living Lands & Waters founder Chad Pregrake. Yet given our guides' charming visits with Mississippi River eccentrics, some surprisingly evocative imagery, and the lovely and funny comradeship of Hullquist and Jeanes themselves, it's hard to imagine who wouldn't enjoy this sweet, terrifically amiable doc. The River Is Life may not feel like a movie so much as a pilot for a pretty great reality-TV series, but either way, it's pretty great.

For more information on The River Is Life and its September 10 screening at Riverside Park, visit TheRiverIsLife.com.