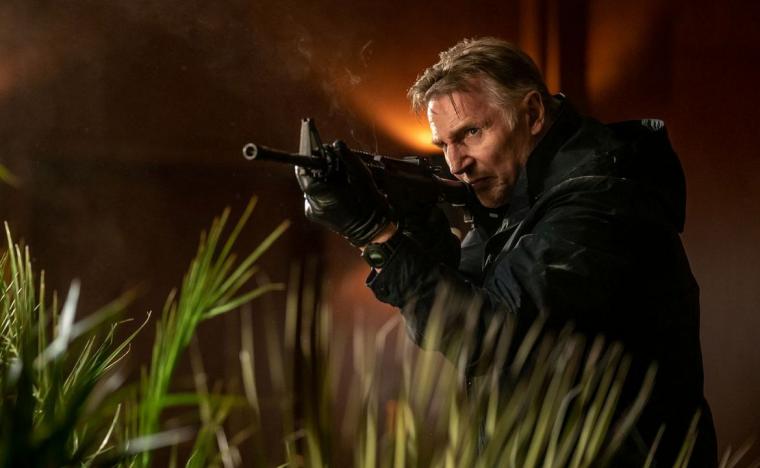 Have you seen the poster for director Martin Campbell's Memory? It's Liam Neeson with a gun. You could say the same, of course, about the poster for nearly every movie since 2009 to showcase this particular star and this particular weapon. But the advertising gurus for Neeson's new revenge thriller have really outdone themselves, because the promotional image is literally just a profile of the actor – looking typically grim in a button-down shirt, tie, and leather glove – holding a revolver with a silencer attached. Finally: Liam Neeson's entire post-Taken oeuvre distilled to its purest essence.

To be fair, the poster's design is actually pretty sleek: The icy blues and various shades of gray and black imply stylish menace; there's a bullet hole where the title's “O” should be; Neeson's blurry, barely visible reflection suggests potential internal struggle for the guy's armed vigilante. (That reflection is certainly more subtle than the accompanying tag line: “His mind is fading. His conscience is clear.”) Yet as aesthetically pleasing as the image is – and knowing full well that its simple come-on is all that the star's super-fans need to plan their next trip to the cineplex – it's too bad that the print marketing isn't more … distinctive. Because while, in many ways, Memory is prototypical Neeson-with-a-gun schlock to its teeth, the film proves to be quite a bit more interesting than most efforts of its type, and Neeson himself is even allowed to act in this one, as opposed to merely demonstrating the Five Stages of Grief(-Fueled Vengeance) for the gazillionth time. Campbell's latest isn't necessarily a good movie, but compared to four-fifths of its Irish headliner's big-screen blood baths, it's definitely an improvement.

As will likely surprise no one familiar with his credits, Memory casts Neeson as a hired assassin. (Similarly unsurprising is that Neeson plays a Texan without a hint of a Texas accent.) We know that his character Alex Lewis a bad-ass when, five minutes into the film, he murders a cretinous lout directly in front of the guy's mother. We know that we should feel sympathy for this bad-ass when, immediately afterward, Alex enters his getaway car and can't remember where he hid the keys. Alex, you see, is suffering from Alzheimer's – just like the institutionalized older brother he routinely visits – and the car-key incident proves to be the tipping point in his decision to retire. Naturally, however, Alex agrees to accept One Last Job before bidding adieu to his life of contract killing – and balks at the assignment after discovering that his target is a 13-year-old (Mia Sanchez) who might blow the whistle on the state's largest, most suspiciously well-funded child-trafficking ring. Consequently, rather than execute the kid, Alex chooses to instead execute the monsters who've endangered her life, and there are plenty of them to go around. 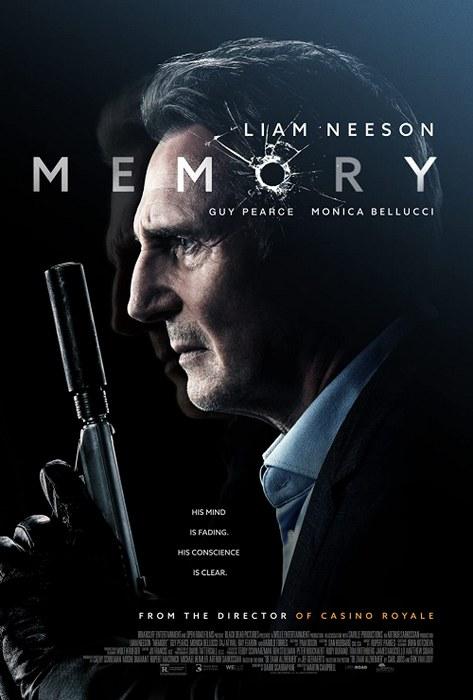 Or so I thought. Yet following an opening half-hour that dutifully introduced Alex's loathsome employer (Lee Boardman) and a number of the villain's scummiest henchman, I was astonished to realize that our antihero Alex had gone and murdered every last one of them. What on earth, I thought, would fill the remainder of the film's 114-minute running length? Scenes of Alex contentedly playing gin rummy in his retirement home? Credit screenwriter Dario Scardapane, then (and Memory's 2003 inspiration – the Belgian thriller The Memory of a Killer), for focusing the rest of the movie not on Alex so much as the team hunting him, Fugitive-style, before he potentially kills again: stalwart FBI agent Vincent Serra (Guy Pearce), his assistant Linda Amistead (Taj Atwal), and Mexican detective Hugo Marquez (Harold Torres).

This unexpected development alone would separate Memory from the depressing de rigueur-ity of Neeson's recent filmography, with bonus points for cleverness tossed in via the presence of Peace, whose own memory-loss thriller Memento hit area screens almost exactly 21 years ago. (At one point here, in order to recall newly learned information, Neeson's Alex writes the details on his arm – just like Pearce's Leonard Shelby did!) But there are other perks, as well, even if they're blended with bummers. While the majority of executions and cat-and-mouse games are ludicrously conceived, Campbell, ably assisted by David Tattersail's sharp cinematography, stages them with flair. Although significant patches of their dialogue sound unconvincingly looped in post-production, Atwal and Torres make vivid impressions, and Pearce is awfully fine, providing the film with a solid moral center and beautifully underplaying Serra's big character-revealing monologue. The action is repetitive yet briskly paced; the violence is standard yet occasionally shocking (it's not only bad guys that Alex offs); the alluring Monica Bellucci is clearly uncomfortable with English yet is still Monica Bellucci.

And unlike the Neeson-with-a-gun thriller Blacklight from three months ago (three months ago!) that gave its protagonist OCD for no narrative or emotional purpose whatsoever, this sub-genre entry at least has the good sense and taste to not turn Alex's Alzheimer's into an afterthought. It should go without saying that the man's malady is employed for plot-centric purposes. Campbell and Neeson, though, refuse to treat the condition blithely, and if Neeson is wrenchingly believable when Alex is forced to cauterize his bullet wound with booze and a Bic lighter, he's even more affecting when the assassin's mind begins its ultimate deterioration. It's unlikely that any of its viewers will find themselves choked up by Memory. But watching Liam Neeson give a legitimate performance – and a terrific performance – in the kind of paycheck project he long ago appeared to stop caring about is, in itself, pretty darned moving. Scratch that. It's closer to miraculous.