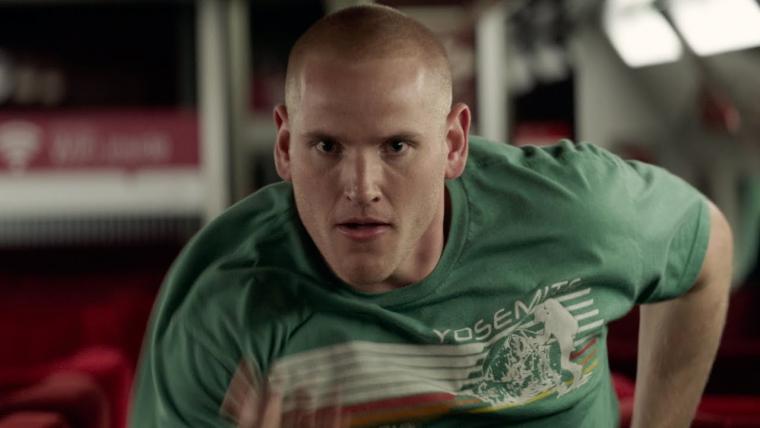 Amateurishness in a movie is almost never a virtue, and certainly shouldn't be one when the movie's director is Clint Eastwood. But The 15:17 to Paris – Eastwood's dramatic reenactment of events leading to a foiled 2015 terrorist attack – is a special case.

Instead of employing professional actors to play the American heroes who, on a train from Amsterdam to France, tackled and helped subdue the heavily armed Moroccan Ayoub El Khazzani, Eastwood cast the heroes themselves: Spencer Stone, Alek Skarlatos, and Anthony Sadler. None of them had previous performance training, and it shows; while all three are genial and charming on-screen, the men are understandably limited in their attempts at emotional nuance, and their dialogue is surrounded by dead air – the kind you get when watching novice stage actors whose lines are just barely committed to memory. Yet there's also an undeniable thrill in the stunt casting. With none of the leads carrying baggage from previous roles, everything Stone, Skarlatos, and Sadler do and say has at least a whiff of surprise, and given the nature of the story and their roles in it, Heaven knows they're easy figures to root for. (Clearly, they all survived the attack, but seeing how they'll survive starring roles in an Eastwood picture is another matter entirely.) More accomplished performers may have given these characters more texture, but I wouldn't have traded the 15:17 to Paris participation of Stone, Skarlatos, and Sadler for anything. It's nearly everything else I would've eagerly traded.

Eastwood does deliver the eventual terrorist attack, and the brief flash-forwards leading up to it, with a sufficiently scary vérité reminiscent of Paul Greengrass' work in United 93, and it's impossible not to wince in the ugly physical encounter with Khazzani (Ray Corasini), especially when he's being overpowered while driving a blade into the back of Stone's neck. But getting to this riveting sequence means sitting through about 75 minutes of tortuously terrible prelude. First, we're given the many scenes of our heroes as childhood friends, with the young actors playing Spencer, Alek, and Anthony apparently auditioning for a C-grade Goonies knock-off – Eastwood has never shown much talent for directing children – and screenwriter Dorothy Blyskal's astoundingly phony dialogue putting air quotes around every thudding, obvious, frequently sanctimonious utterance. (Also: Why cast familiar comic actors Judy Greer, Jenna Fischer, Tony Hale, Thomas Lennon, and Jaleel “Urkel” White if you're not going to let them do anything amusing?) 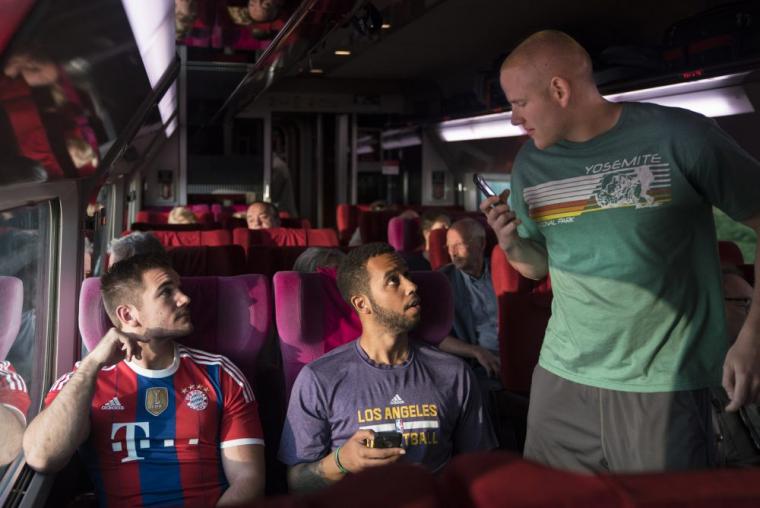 Yet things almost get worse after the real Stone, Skarlatos, and Sadler take over, and the film, for a long time, becomes the cinematic equivalent of lollygagging. There is, to be fair, some intriguing material involving Stone's military training, although Skarlatos' own military tenure in Afghanistan is merely glided over, and Sadler's experiences as a college-student civilian aren't addressed at all. (The film feels grossly lopsided regarding whose pasts are deemed worthy of recounting.) But once all three of our leads land in Europe, Eastwood's latest spends at least 20 of its 90 minutes indistinguishable from a generic offering on Travel Channel, and rarely have I have been so desperate to change the channel.

The guys sight-see in Italy. They ride water taxis in Venice. They bike ride through Berlin. They dance and drink in Amsterdam. They take endless selfies, with nearly all of Sadler's conversation reduced to variants on “We gotta take a selfie!” At one point, almost two entire minutes are devoted to the men choosing flavors of gelato, for God's sake. And every so often a Theme will be introduced, as when Stone is required to offer a stilted, unconvincing meditation on his and his pals' Purpose in the World. Eastwood is a man of many talents, and I'm sure studio heads, collaborators, and friends rarely say no him. But why wasn't there one person brave enough to tell the 87-year-old that it was maybe too late in Clint's career for him to turn into Richard Linklater? Particularly when he gives us all this travelogue at the expense of things we want to see, such as the moment of Stone's and Sadler's reunion with Skarlatos, and why Skarlatos is so initially dismissive of Stone's military plans, and the reason Stone is sleeping on the floor when he misses a basic-training roll call? To misquote Mae West: When The 15:17 to Paris is good, it's very good, but when it's bad, it's abysmal … when, that is, it's not merely awkward and weird. Early in the film, we're shown the interior of Stone's childhood bedroom in 2005, and hanging on the wall is an encased American flag, a poster for Full Metal Jacket, and a poster for Letters from Iwo Jima – the latter not only a movie that Clint Eastwood directed, but one released in December of 2006. So the kid's not just a hero-in-the-making. He's a freakin' time-traveler. 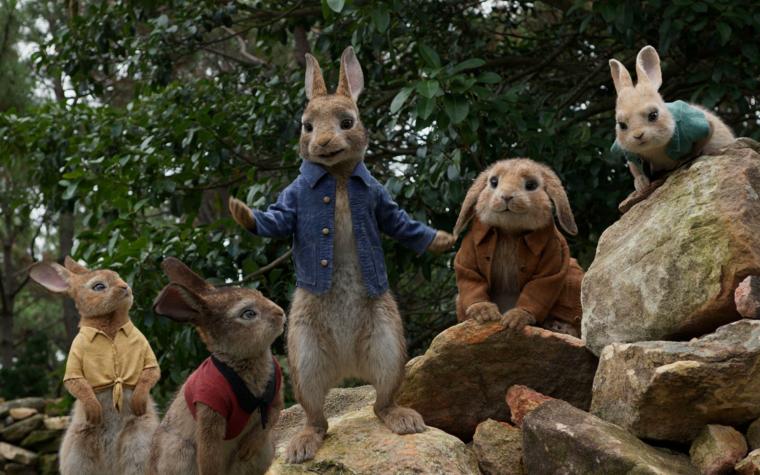 If you're a Beatrix Potter purist, it's hard to imagine what you might hate most about the first 10 minutes of director Will Gluck's live-action-with-CGI family comedy Peter Rabbit. Peter's distinctly present-day snark as voiced by James Corden? The garden-thievery and home-demolition montages accompanied by bubbly pop tunes? Sam Neill's ferocious mugging as vegetable farmer Mr. McGregor? Peter's attempt to drop a carrot into McGregor's visible ass crack? Watching McGregor, incensed by the bunny's pilferage, suffer a heart attack, drop to the ground, and die?! (Flashbacks suggest it wasn't Peter that killed him so much as an irresponsible diet and ceiling asbestos, but still … .) Meanwhile, as the movie progresses, Potter devotees are equally likely to chafe at the Home Alone-style über-violence perpetuated against McGregor's nephew Thomas, and Peter's winky breaking of the fourth wall, and the innumerable chase scenes, and the inevitable verbal nod to Babe … . (I'd cite that film's most quotable line, but really, there's only one.) This Peter Rabbit is so much the opposite of genteel storybook prose and delicate hand-drawn illustrations that it's almost as though Gluck entered a contest to see who could piss off the most Beatrix Potter fans in one sitting. And he won.

The thing is, though, Potter is Potter, and Gluck is Gluck, and I think there's room for both in a single entertainment – especially when the entertainment in question is as sprightly, inventive, and unexpectedly riotous as Peter Rabbit. It never quite reaches the lunatic highs of the Paddington movies, nor does it exude a similar sweetness of spirit, with its scenes of sentiment feeling less organic than family-flick inevitable. But as he's proven in comedies as disparate as Fired Up!, Easy A, and the 2014 remake of Annie (a far funnier, wittier work than its reputation suggests), Gluck is a master of offhanded verbal firecrackers and slapstick goofiness, and he and co-screenwriter Rob Lieber, here, deliver both to the nth degree. My largely grade-school crowd cackled with glee when Peter electrified the McGregor house so that Thomas (Domhnall Gleeson, rubber-limbed and fearless) literally bounced off the walls, and the kids were right to do so. Yet I ran out of fingers counting how many times Gluck's somewhat crass yet hilarious outing made even this middle-aged man laugh out loud: the character-revealing detail of a rabbit's foot attached to Thomas' car keys; the alternating joy and panic in the rooster's subtextual crowing; the rabbits' clichéd slow-motion walk toward the camera upended by a sardonic quip; the deer in the headlights; the shell game; the rakes. (For a few delirious seconds, Gleeson gets to be Sideshow Bob in The Simpsons' legendary “Cape Feare” episode.) Adding the eternally luminous Rose Byrne, the startlingly fine CGI animation, and a vocal cast that includes Margot Robbie, Elizabeth Debicki, and Daisy Ridley as Flopsy, Mopsy, and Cotton-Tail, and this cheeky and very loose adaptation is an unmitigated delight. Upon the successful completion of his rake prank, Peter exclaims, “It was right on the edge of believability!” God love it, so is Peter Rabbit. 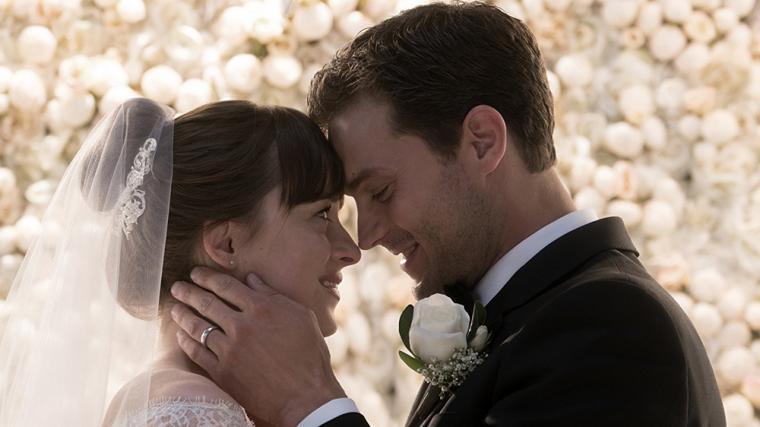 Fifty Shades Freed opens with everyone's favorite S&M couple Anastasia Steele (Dakota Johnson) and Christian Grey (Jamie Dornan) enjoying their honeymoon on a European topless beach until Christian chides the new Mrs. Grey for taking off her top. As per usual in their relationship, Anastasia is incredulous, and asks hubby to look at the sea of naked breasts surrounding them, saying, “It's like Boobs in Boobland!” Why on Earth that isn't the title of this trilogy-ender is beyond me.

For the most part, I had a good time at the silly, trashy antics of 2015's Fifty Shades of Grey and 2017's Fifty Shades Darker, primarily because the movies, and their endearing star Johnson, refused to take themselves all that seriously. But barring very rare moments of comedy here – principally when Anastasia suggests to a pair of inept security guards that she and Christian just might have some handcuffs lying around – part three of author E.L. James' torrid-romance series is serious stuff, and the laughable lugubriousness of director James Foley's presentation just makes everyone on-screen look like a boob. There's a kidnapping and a stalker (a sweaty, red-eyed Eric Johnson); there's mild gunplay and nearly-as-mild foreplay; there's betrayal and a car chase and predictable fights over Anastasia keeping her maiden name and forgetting her birth control. Practically none of it, though, is engaging beyond a luxury-porn surface level, and the once-winning rapport between Johnson and Dornan has soured into mannerism and affectation; for the first time, the stars appear to be having as little fun together as press reports kept telling us they were (weren't?) having. Between the leads' lack of post-nuptial heat and the endless stupidity of the plotting, Fifty Shades Freed is a bummer of a climax, and by the time the end credits began to roll, the only character I came close to caring about hadn't been born yet. Wait'll that poor kid finds out just how much Anastasia and Christian are into spanking.