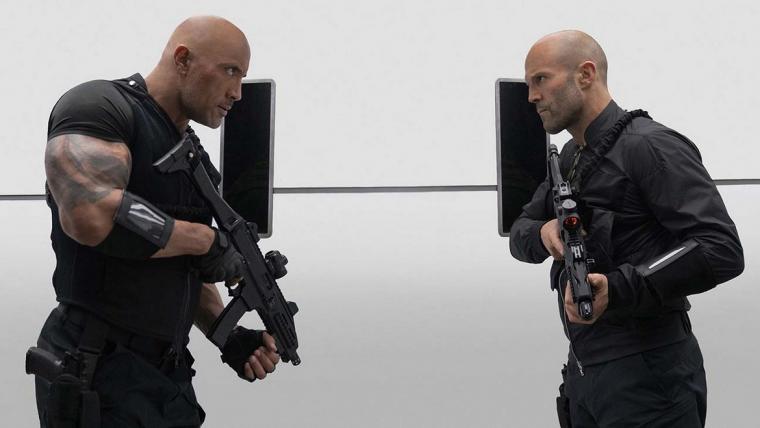 Its franchise conveniently branded into its title, Fast & Furious Presents: Hobbs & Shaw re-casts Dwayne Johnson and Jason Statham, respectively, as federal DSS agent Luke Hobbs and British Special Forces mercenary Deckard Shaw – recurring ass-kickers in the latter F&F flicks now forced, despite their mutual loathing, to team up against the spread of a planet-annihilating virus. Ordinarily, it's the sort of movie I'd casually dispose of in a couple hundred words at the end of a series of reviews – a chaser after time spent on more worthy subjects. This past weekend, though, saw Hobbs & Shaw the only new offering in wide release, so I suppose a few hundred extra words are in order. That shouldn't be a problem, though. There's so much here to hate.

Or love. Whatever. Theoretically, everyone who's paying to enter Hobbs & Shaw knows precisely what they're getting into: Johnson and Statham trading comic hostilities and insults and bragging rights over whose body-fat percentage is lower; a maniacal meanie – here, thankfully, it's Idris Elba – whose motives are as simple as his plans are vague; death-defying stunts made slightly less awesome via the onslaught of CGI; bland paeans to the importance of family (a Fast & Furious specialty). And even those of us who aren't particularly partial to blockbuster behemoths of this ilk might be willing to go with the flow anyway. I generally like Johnson, despite his apparent contractual obligation to appear in at least one breathtakingly dumb movie per year, and also generally like Statham, despite his apparent obligation to appear in at least one thunderously mediocre action movie per year. That we get both movies in director David Leitch's franchise-starter-slash-continuation isn't necessarily to its detriment. I didn't dislike Hobbs & Shaw because it was stupid. I disliked it despite it being stupid.

Taking the nonsense plot as a given, the film actually opens with a moderately amusing split-screen montage of our heroes beginning with their six a.m. wake-up calls: Hobbs, in Los Angeles, downs a glassful of raw eggs á la Rocky while Shaw, in London, fastidiously prepares an omelet; Hobbs takes off on his motorcycle while Hobbs mans the wheel of a pricey sports car; Hobbs tells a strip-club bad guy “I'm an ice-cold can of whup-ass” while Hobbs whispers to his own strip-club bad guy “I'm what you'd call a champagne problem.” We get it, of course: They're Oscar and Felix. Diesel and Walker. Ernie and Bert. (Homoerotic subtext completely intentional.) And all is fine, if intensely obvious, until Hobbs and Shaw learn they're going to be partnered up for their latest mission, at which point both men stare directly into their individual cameras and exclaim, “No f---in' way!” (Kudos to screenwriters Chris Morgan and Drew Pearce for cleverly dropping two F-bombs into their PG-13 release, considering the rating traditionally allows only one.) 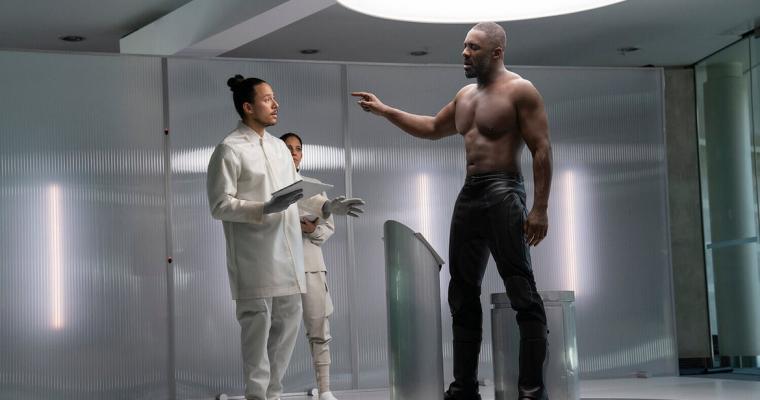 Once they begin sharing a screen, though, Hobbs and Shaw – and Johnson and Statham – quickly become a genial bore. Yes, the slurs fly as fast and furious as the series' title demands. But while the repartee screams for an author with the imagination of Paul Feig, who guided Statham toward brilliant comedy opposite Melissa McCarthy in 2015's Spy, the disparagement here is kept strictly at the level of junior-high wit. (Not that this seemed to bother my fellow patrons: When Shaw forced Hobbs into disguise under the alias “Mike Oxmaul,” a security guard's recitation of his name made a guy at my screening laugh until it induced a coughing fit.) And Hobbs and Shaw take so very long – almost a full 137 minutes – to realize they might be more effective not verbally abusing each other, but rather working as a team, that you almost wonder if they're in cahoots with Elba's über-villain, delaying his capture solely for the chance at one more jab about which one of them is manlier. I'd never before dreamed that a dick-measuring contest between two contestants could last two-plus hours.

Are the stunts cool? Of course they are, even if Statham appears to be moving a little slower than in his heyday. (Aren't we all?) Asking if the stunts in a Fast & Furious outing are good is like asking if the animation in the latest Pixar is up to snuff. But their presentation is so deathly repetitive, and by this point (nine F&F films in) so familiar, that I blocked them from memory the way you reflexively block pain. I remember there being a borderline-fun bit with Hobbs, on a rope, and Shaw, in an elevator, traversing the outside of a skyscraper, and recall a car chase involving Elba that found one of our heroes saying “We're being chased by the Terminator!” – which, given Elba's ridiculous role as a genetically-engineered assassin, wasn't far from the truth. (At one point, Elba's Brixton goes so far as to say, “I'm Black Superman!” … a line that might have been a more laudable feather in the screenwriters' caps if Hobbs didn't consequently compliment him on the line, like, five minutes later.)

Otherwise, I spent most of Leitch's numbing action comedy bothered by issues that would only occur to the irredeemably bored. Issues such as: “How can Hobbs and Shaw endure such spine-cracking torment yet be knocked unconscious with single gun-barrel blows to the head?” And “How much did producers shell out for those Helen Mirren and Ryan Reynolds and Uncredited Diminutive Comedian cameos?” And “Wait a minute … Jason Statham and Vanessa Kirby are supposed to be brother and sister?!” (Childhood flashbacks show their siblings to be, at most, about three years apart in age, yet Statham is 52 and Kirby is 31. I haven't been so confounded by that kind of cinematic disparity since 72-year-old Cher played 69-year-old Meryl Streep's mom in Mamma Mia! Here We Go Again.) 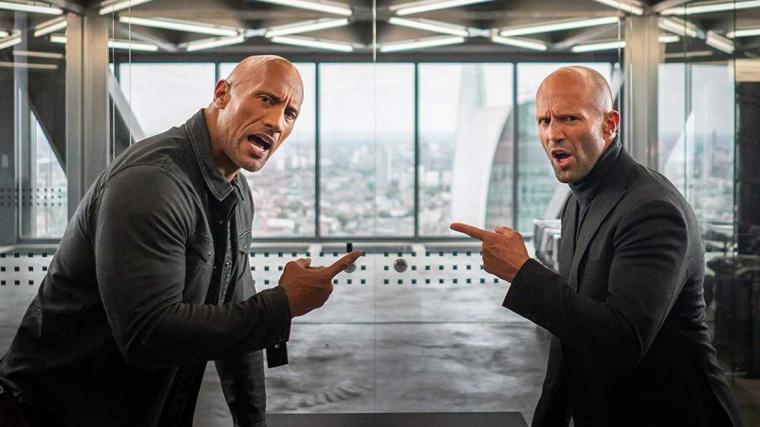 I'm sure it's a lovely place. But I hope tourism officials forgive me for saying that the film's Samoan section turns an already-irritating movie into something bordering on the nauseating. Of course Hobbs has to be a native Samoan who just happens to be estranged from his equally hard-assed brother (Cliff Curtis) who just happens to run a custom auto-body shop just like Vin Diesel does in the F&F franchise. Of course Hobbs has a fiercely devoted mama (Lori Pelenise Tuisano) who forces her boys to hug and make up. Of course Samoa proves the perfect spot for Shaw and his decades-younger sister to mend their familial discord. Of course the slow-motion action spectacle is augmented with a slow-motion shot of Dwayne Johnson lumbering toward the camera shirtless, carrying a spear, and donning a Samoan skirt. And of course it all concludes with another gi-normous free-for-all … albeit one in which night turns to day turns to thunderstorm-dark turns to oppressive sunshine in the time it takes most human beings to sneeze. That conclusion also boasts such expected, family-first howlers as Hobbs' admonishment to Brixton – “You may have technology, but we have heart” – that might have meant more if Hobbs didn't spend the previous two hours being so heartless toward Shaw.

I realize I've spent very little space discussing the Fast & Furious Presents: Hobbs & Shaw storyline. In a nutshell, it's about Kirby's character needing to have a lethal virus extracted from her body within 72 hours. Her movie, I'm sorry to say, feels like 72 hours, too.