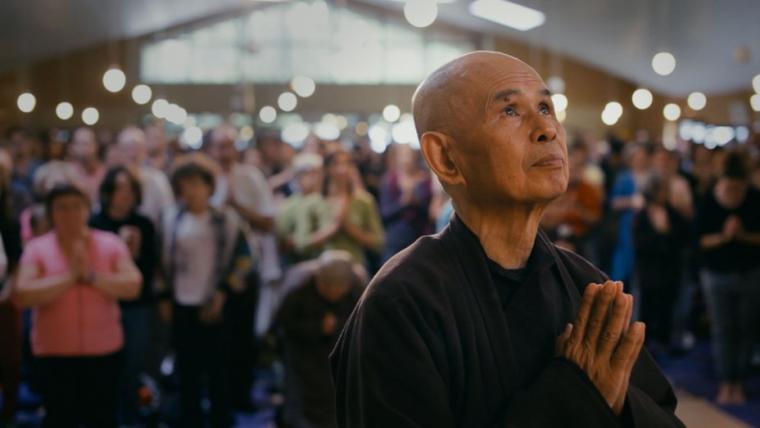 Described by RogerEbert.com as “a unique documentary spectacle” and the New York Times as “cooling to the mind and soothing to the spirit,” directors Marc J. Francis' and Max Pugh's Walk with Me will enjoy special Figge Art Museum screenings on March 15 and 24, giving viewers unique insight into the legacy of Buddhish monk and peace activist Thich Nhat Hanh – a man nominated for the Nobel Peace Prize by Dr. Martin Luther King.

The recipient of 2015's Pacem in Terris Peace and Freedom Award, Hanh was born in central Vietnam in 1926, joined a Zen monastery at 16, studied Buddhism as a novice, and was fully ordained as a monk in 1949. In the early 1960s, he founded the School of Youth for Social Services in Saigon, a grassroots relief organization that rebuilt bombed villages, set up schools and medical centers, and resettled families left homeless during the Vietnam War. Hanh also routinely traveled to the U.S. to study and later teach at Columbia University, and famously urged Dr. King to publicly oppose the Vietnam War. Currently, Hanh lives in the Plum Village meditation center in southwest France and has published more than 100 books to date, includng more than 40 written in English.

Narrated by Oscar nominee and Sherlock star Benedict Cumberbatch, Walk with Me explores a Zen Buddhist community whose members have given up all their possessions and chosen lives of chastity for one common purpose: to transform their suffering and practice the art of mindfulness with Thich Nhat Hanh. Filmed over three years in the monastery in rural France and on the road in the United States, Francis' and Pugh's film is a meditation on a community grappling with existential questions and the daily routine of monastic life, and inspired the Los Angeles Times to rave, “The scenery is sublime, the messages uplifting, and just the act of watching it will make you want to slow down.”

Walk with Me will be screened in the Figge's John Deere Auditorium at 6 p.m. on March 15 and 2 p.m. on March 24, admission is free, and more information on the events is available by calling (563)326-7804 or visiting FiggeArtMuseum.org.