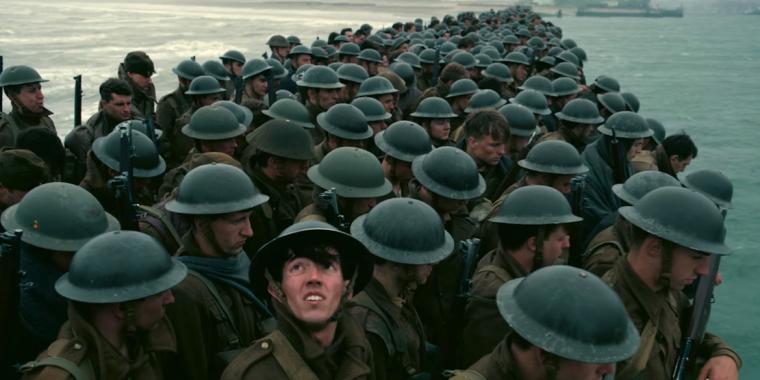 At an hour and 46 minutes, Christopher Nolan’s World War II thriller Dunkirk is the director’s shortest feature film since his 69-minute 1998 debut Following. It may also be his most wholly satisfying. I’d suggest that maybe there’s a lesson to be learned here, but who gives a damn about lessons when confronted with a work this masterful, powerful, and emotionally overwhelming?

After the aggressive bloat of 2014’s Interstellar, practically any new Nolan that ran a full hour less would, for some of us, have come as blessed relief. But while the writer/director’s latest is, I think, a legitimately great war movie, it’s an even better Christopher Nolan movie – one that plays ingenious games with chronology and time yet doesn’t leave you feeling unfairly manipulated or duped. As opposed to complexly designed outings such as Memento and Inception, the similarly serpentine Dunkirk finds Nolan employing his cinematic-sleight-of-hand talents in service of sobering drama and grand bursts of feeling. He proves so astoundingly good at it, however, that while working through the experience on the drive home, I almost wished he’d never again make another purely popcorn entertainment, even one as fiendishly clever as Memento or Inception. (Almost. I’d still pay big bucks for Nolan’s Prestige 2 or just one more of his Batman sagas – especially these days.)

That may imply that Dunkirk itself isn’t any fun. In its way, though, the film absolutely is – you just have to put “fun” in quotation marks. Centered on the theoretically impossible rescue of hundreds of thousands of Allied troops in the summer of 1940, most of them British, Nolan’s singular tale explores the famed Operation Dynamo through the bravery and tenacity of soldiers and civilians on land, on the sea, and in the air. Nolan being Nolan, however, it’s not enough for the man to dovetail those three vaguely defined locales – which, in context, are actually fiercely specific – within three distinct narratives. He also manages to dovetail the experience of time itself.

The “land” segment covers the span of a week, with Fionn Whitehead’s young soldier Tommy serving as the entire movie’s de facto audience surrogate. The “sea” narrative presents events that occur over the course of a day, with 17-year-old George (Barry Keoghan) jumping aboard a small pleasure cruiser – for duties initially unknown – manned by a local father and son (Mark Rylance and Tom Glynn-Carney). And the “air” section explores only an hour of shared experience, following a pair of British Spitfire pilots engaged in aerial combat, both of whose planes are slowly but steadily running out of fuel. (One of the pilots is played by Jack Lowden, and the other by a famous name whose casting here is such a delicious Nolan in-joke, and for so many reasons, that I’m not gonna be the one to spill the beans.) Each of Dunkirk’s three portions, regardless of the hours or days covered, is given roughly equal weight and screen time, and after establishing the locales and lengths of his interlocking strands with succinct opening title cards (i.e. “The sea: one day”), Nolan, for the next 100-or-so minutes, never again literally spells out where we are, or when we are. Fun! Or rather: “Fun!” 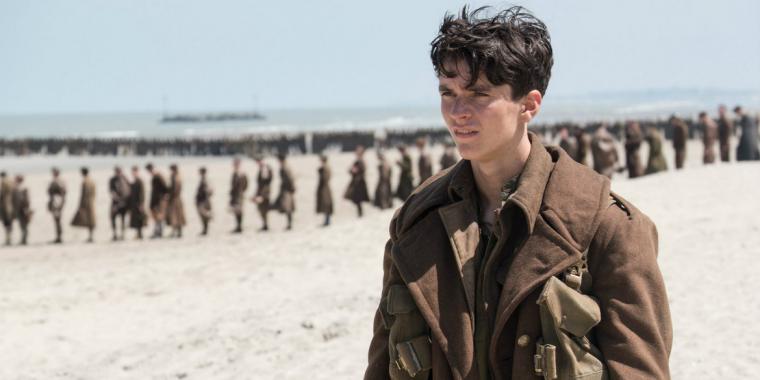 In all honesty, the movie’s structure, for me, did yield enormous enjoyment. All three tightly plotted storylines, with their suitably minimalist dialogue, were ones I felt eager to return to, and there’s fantastic cleverness on display in editor Lee Smith’s cutting, which links, for example, the narrow escapes of Whitehead’s and Lowden’s figures with visual and aural inventiveness that doesn’t feel either show-offy or cheap. Dunkirk, though, is still a frequently tough watch, simply because it’s so relentless. Seemingly egged on by composer Hans Zimmer’s propulsive score – a thunderous beauty whose incessant ticking-clock and heartbeat sounds may as well be signifying the end of days – the film never lets up on the grueling intensity; even in a scene of troops finally relaxing with bread, jam, and tea, you’re dreading an attack that could, and does, come with no notice whatsoever. Dunkirk, with its PG-13 rating, isn’t gory in the manner of Saving Private Ryan or Platoon, but the suffering and deaths we witness are no less brutal.

And man is the movie loud, which, for the first time in a Nolan endeavor, I mean as a complete compliment. I saw the film in its local IMAX presentation, and I’m not sure that I’ve ever before been so cognizant of just how deafening war can be, with the explosions drowning out both dialogue and the entire notion of human decency, and the sounds of incoming bombs indistinguishable from ever-more-piercing screams. (At one point, Tommy covers his ears in an attempt to withstand the noise, and he’s underwater at the time.) Only toward the climax, when Nolan’s plots finally converge and Dunkirk allows itself, and us, some deeply earned sentiment, is there any respite from the pummeling intensity. Yet that proves to be just enough. God knows we don’t go through the hell that Operation Dynamo’s real-life counterparts did. But it feels right that Nolan’s dramatic thriller should be such a trying experience for such a long period of time, and that audiences should exit the film, as I did, feeling battered and bruised but unquestionably relieved, and almost profoundly moved. A gentleman in front of me who appeared about 60 wept openly during much of the movie’s final half-hour. I wouldn’t pretend to know what personal experience this man brought to our screening, but his reactions felt right, too.

I’m not sure when I’ll be in the mood to see the unflinching, devastating Dunkirk again, or even what that mood could imaginably be. (Maybe a mood to re-watch potential – or in this case, certain – Oscar contenders.) But I will see it again, eventually, for cinematographer Hoyte van Hoytema’s indelible images: hundreds of troops falling face-down in the sand, and rising together with stiff-upper-lip levelheadedness; a soldier committing suicide via an endless walk into the sea, with troops watching him and not even trying to intervene; a beachfront littered with dozens of empty helmets. I’ll see it for the visual and aural spectacle, with its scenes of aerial combat perhaps unrivaled in modern movies and the sight of a battleship going belly-up that delivers more horror in a faraway 10 seconds than Cameron’s Titanic produced over the course of an in-your-face hour. And I’ll see it, most of all, for the technical genius, incisiveness, and inspiring humanity of Christopher Nolan, who demonstrates, in his staggering achievement, how precious little can separate a week from a day from an hour when the only thing currently mattering is war. 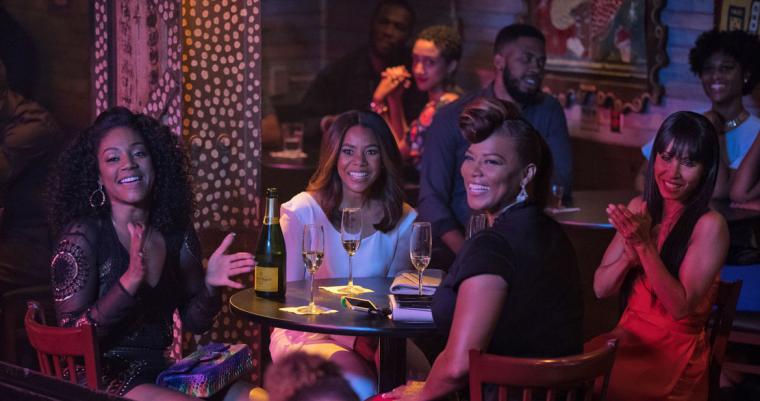 Girls Trip is a raunchy slapstick about a reunion weekend shared by four former college besties whose paths inevitably led them apart, and it features Regina Hall as an Oprah-like inspirational force, Queen Latifah as a struggling “Gotcha!” journalist, Jada Pinkett Smith as a mousy mom in need of some good lovin’, and Tiffany Haddish as a lascivious lush. If you’re thinking that you just saw – or avoided – the white-girl version of this movie in last month’s Rough Night, you’re not exactly wrong. But it’s actually more accurate to describe director Malcolm D. Lee’s outing as an updated and wickedly profane Steel Magnolias, albeit with fewer stars, funnier jokes, no diabetes-related deaths, and an unforgettably filthy demonstration of the fine art of grapefruiting.

It’s always tempting to say that there are no surprises in obvious, predictable comedies of this ilk, and narratively speaking, that’s certainly true here. But I honestly didn’t expect the film’s occasionally dramatic face-offs between the women to land with such honesty and force; their situations may be contrived, but the characters’ anger and hurt – and their undying support for one another – feel unerringly real. And while all the traditional genre tenets are dutifully in place, from the public comeuppance for Hall’s cheating spouse (a suitably hateful Mike Coulter) to the presence of an abashed sweetheart waiting in the wings (a charming Larenz Tate), I was never bored, primarily because the movie doesn’t give you the opportunity. Set during a New Orleans ESSENCE Festival, Girls Trip is overflowing with cameos from A-list talent, so even when the plot starts creaking, you can count on the sight of Common or Ava DuVernay or Sean Combs to goose your attention. Random bits of hilarity are provided by Kate Walsh as an inappropriate agent and Mike Epps as a tenacious absinthe dealer. While all four leads are funny, Haddish takes tasteless comedy to new, previously unfathomable heights/depths of hysterical crudeness, going off on invective-laden tirades nearly jaw-dropping in their comedic vehemence. (In one of her more memorable moments, Haddish also urinates, explosively, while zip-lining ... but then again, so does Jada Pinkett Smith. It’s that kind of movie.) And as a major fan of Regina Hall, I’m beyond-thrilled that Lee’s outing has finally given her the showcase this ineffably charming, beautiful, gifted performer has long deserved, and she comes through with a performance that’s wonderfully empathetic and richly textured. Watching Hall’s scorned wife valiantly smile in front of her lowlife hubby’s secret girlfriend, Queen Latifah mutters, “She’s doing some real Academy Award shit here.” Actually, it’s Hall herself who’s Oscar-deserving, and all throughout the movie, to boot.