The War on Dregs: “Crisis,” “The United States vs. Billie Holiday,” and “Tom & Jerry” 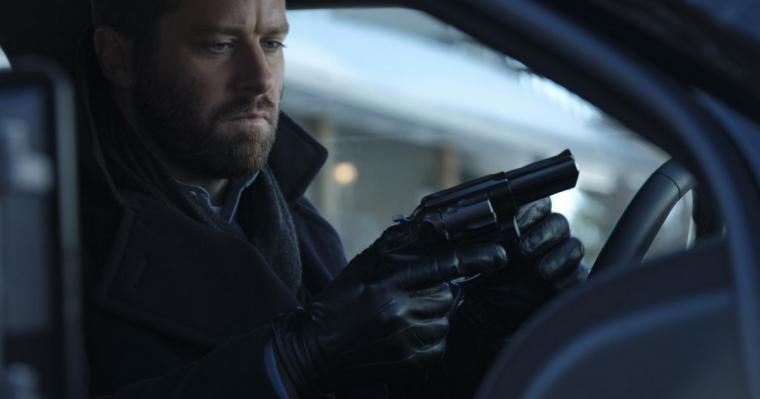 Because the movie had its area premiere just over 20 years ago, it makes sense to want to compare writer/director Nicholas Jarecki's debuting drug thriller Crisis with Steven Soderbergh's two-decades-old drug thriller Traffic, a work that, like the new film, tells its tale via three alternating narratives with their own sets of protagonists. Not having read my original Traffic rave in ages, I checked it out after returning from Jarecki's cineplex release, and loath as I generally am to quote myself, I came across this passage: “... it's to the movie's immense credit that there's not a plotline you're eager to move on from, or one that you're not welcome to see appear.” So I suppose this is where comparisons between the titles end, because that opinion is pretty much the exact opposite of what I'd say about Crisis.

It's not that the film's three distinct segments – all of them exploring a particular facet of the current opioid epidemic – are necessarily bad. They're not, even if a couple of the central performances come close. They are, however, familiar to the point of lethargy, partly because they baldly suggest similar narratives in Soderbergh's Oscar winner (and here I go comparing again … ), and partly because each third of the movie feels like its own miniature drug drama that you've either already seen or blithely skipped past while perusing cable, streaming, or even broadcast-TV options. An undercover DEA agent attempts to bust an international smuggling operation. A bereaved mother hunts those responsible for her teenage son's overdose. A tenured professor contemplates blowing the whistle on unethical Big Pharma practices. Haven't we all sat through previous versions of these shopworn tales before? Maybe even with Crisis leads Armie Hammer, Evangeline Lilly, and Gary Oldman starring in them?

Among Jarecki's trio of storylines, the one involving Lilly's recovering addict Claire is the least bothersome, even if it is wildly improbable and requires the actress to be at Shelley-Duvall-in-The-Shining levels of hysteria practically from start to finish. At least there's some mystery involved, given that not only was Claire's son not a known opioid abuser, but his autopsy reveals that, prior to his death, the young man likely never touched a drug in his life. In between bouts of grief and rage, and with the option of using again never far from her mind, Claire pulls off some low-level James Bond surveillance that seems highly unlikely for the character, and her eventual transformation into avenging angel feels equally unsupported. Lilly, though, certainly gives the role everything she's got, and compared to his work in the other two narratives, Jarecki prevents the material from slipping into overwritten, ham-fisted obviousness. As one-third of a movie, it's decent enough, which is as close as Crisis ever gets to actually being good. 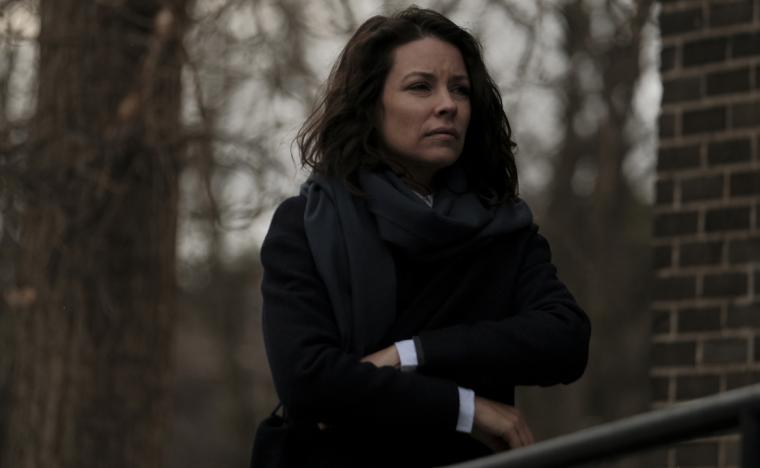 Around the film's three-quarter mark, Lilly's portion of the saga unexpectedly intertwines with Hammer's, and it's a considerable relief, because Hammer's portion wasn't going anywhere interesting. As agent Jake Kelly, whether in drug-runner disguise or not, Hammer is required by the script to be forever pissed: mad at the smugglers whom he accuses of trying to cheat him; mad at his DEA supervisors (including Michelle Rodriguez) for not offering unwavering support; mad at his heroin-addict sister (Lily-Rose Depp) for relapsing at a time that's totally inconvenient for Jake. (The nerve.) Genuine, frightening anger, however, isn't exactly in Hammer's wheelhouse – not in real life, at any rate – and so the actor continually comes across as less incensed than huffy, with all of his scenes playing like bland undergrad improv: “He's a vicious opioid dealer and you're a hot-tempered cop: Go!” No aid is provided by the formulaic action and uninspired dialogue, but Hammer is six-foot-five, devastatingly handsome, and his character drops an “F”-bomb into every other sentence here: How can he be so unmemorable?

Oldman, by contrast, isn't nearly as forgettable in Crisis – and Lord how I wish I could forget him. His percentage of screen time is like a shrink-wrapped version of Michael Mann's The Insider with Big Tobacco replaced by Big Pharma, and potentially fascinating avenues are hinted at as Oldman's Dr. Tyrone Brower faces personal and professional fallout from insisting that a drug company's new “non-addictive” painkiller is, in truth, addictive as hell. Yet there's neither subtlety nor surprise in this segment of the film. (I kept waiting for Oldman's journey to dovetail with Lilly's and Hammer's, which would've at least given the whistle-blower segment some variety, but no luck.) Bigwig figures played by Greg Kinnear, Luke Evans, Martin Donovan, and others radiate “corporate evil” from the moments they're introduced, and Oldman is close to unbearable, shouting Brower's outrage at top volume almost throughout, and doing so in a regionally unplaceable American accent that only seems to exist in the actor's head. Of Crisis' triad of underwhelming narratives, this one is the most well-intentioned, climaxing with a title card underlining the sadness and horror of the worldwide opioid epidemic. Overall, though, Jarecki's outing feels less like a movie than an unnecessarily busy PSA, and my guess is that, like me, you've also seen this sort of thing done with more energy, invention, and detail. Maybe just over 20 years ago. What was that movie's title again … ? 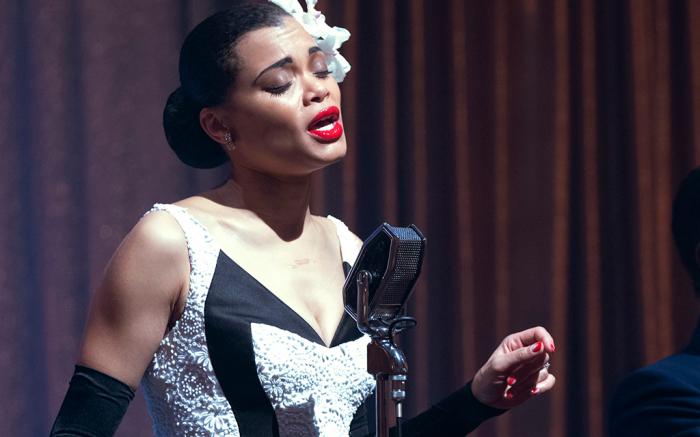 THE UNITED STATES VS. BILLIE HOLIDAY

Watching Andra Day channel the legendary torch singer in The United States vs. Billie Holiday is like finding a ravishing diamond within a crumpled-up paper sack that's obviously been trampled on. I literally can't recall the last time I witnessed a portrayal this beautiful in a film this relentlessly downbeat, if not legitimately ugly. But there you have it: Director Lee Daniels' meandering, maddening bio-pic (newly streaming on Hulu) tells of the last 10 years in its titular icon's life with maximum emphasis on her heroin addiction, the lovers who abused and exploited her, and the racist zeal with which she was hounded and terrorized by the FBI of the 1950s. Every so often, Daniels' film remembers that Billie Holiday could also sing. Those moments don't come along anywhere close to enough.

Taking into account her troubled history, well-documented battles with drugs and the law, and early death (of liver disease) at age 44, a cheerful bio-pic on Holiday would, of course, be disingenuous at best, perversely inaccurate at worst. But surely there were presentational options beyond this full-scale descent into miserablism, with its script by Suzan-Lori Parks (based on Johann Hari's book Chasing the Scream) suggesting that the happiest happenstance in Holiday's later years was her discovery that a presumed friend and supporter (Trevante Rhodes' Jimmy Fletcher) was an FBI-agent plant recruited to arrest her. That the man eventually becomes a faithful lover, if also a fellow drug user, hardly sweetens the deal. Daniels doesn't spare us, or his star, anything in terms of Holiday's ravages and anguish, and while the film is genre-typical to its core – its tale unfurls in flashback while Day's Holiday is interviewed by Leslie Jordan's fawning radio host – it sets a new standard regarding how much suffering is imposed on its lead. I'm all for shaking up the traditional rags-to-riches blueprint in musical bio-pics, but rags-to-riches-to-rags-to-grubbier-rags-to-death, in this film's case, is hardly an improvement.

There was almost no end to the elements of The United States vs. Billie Holiday that irked me: the unseemly vigor with which Daniels replicates Holiday's humiliations; the prosaic dialogue that turns what should've remained subtext into actual, wholly unconvincing text; the movie's absolute disinterest in figures (among them Natasha Lyonne's Tallulah Bankhead) who don't want to see Holiday destroyed; the Wile E. Coyote cartoonishness of Garrett Hedlund's FBI head Harry Anslinger as he demands that the chanteuse no longer sing her anti-lynching classic “Strange Fruit” in public. Blessedly, though, Holiday does perform “Strange Fruit” for us – as well as “God Bless the Child,” and “Ain't Nobody's Business,” and “Lady Sings the Blues,” and a few others – and those numbers almost make Daniels' film worthwhile, if not eminently worth watching.

Grammy-nominated singer Day, in her film-lead debut, is at all times spectacular, giving a fiercely committed, irrefutably brave performance that cuts through the presentation with force, emotional accessibility, and bitter sardonic humor. Day achieves utter transcendence, however, when replicating Holiday's scratchy-yet-breathy cadences and lilting turns of lyrical phrase, and excepting the funeral-dirge orchestration of “All of Me” that serves as frequent accompaniment to Holiday's struggles, the music and Day's performances of it are easily the best things about The United States vs. Billie Holiday. I never want to see this movie again. And I might have no choice but to purchase its soundtrack. 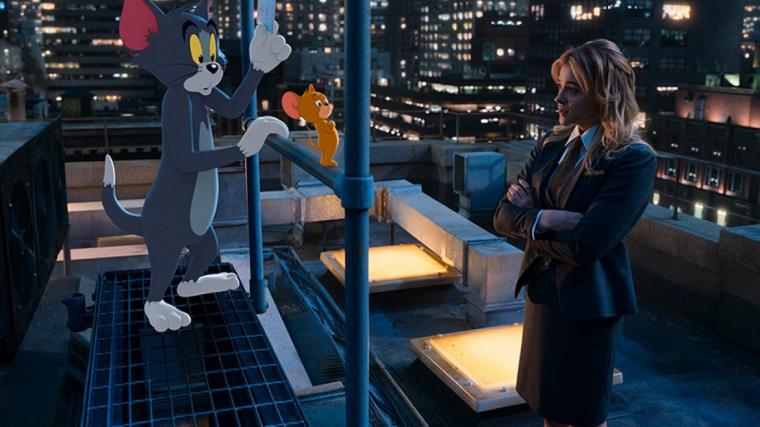 Young children might like it. A few adults might like it, too, I suppose. But while I didn't expect to laugh out loud at director Tim Story's feature-length take on Tom & Jerry (currently playing at the cineplex and streaming on HBO Max), I really didn't expect my biggest smile in this animated/live-action hybrid to come from our titular cat-and-mouse adversaries, in a luxurious hotel suite, watching Young Frankenstein. Even if viewed for only a couple of seconds, that Mel Brooks masterpiece is always good for a grin. Tom & Jerry resolutely isn't.

As I'm entrusted to review movies and not merely “content” – the antithesis of movies that could borrow Tom & Jerry as content's poster child – I'm happy to keep this short. Chloë Grace Moretz and Michael Peña and Rob Delaney work way too hard to make their feeble comic material play. The spine-splitting animated slapstick is painfully uncomfortable in this particular live-action setting. The “modern” cultural references are dated beyond belief. (The Warriors?!) The two most achingly overused clichés in comedies – an upended wedding and a mad dash to the airport – are both employed for the climactic scenes. And, perhaps most damagingly of all, the title characters are basically reduced to mere supporting characters in Kevin Costello's script, with the majority of screen time reserved for Moretz's ambitious hustler ensuring that the lavish wedding for Pallavi Shard and Colin Jost – possibly the most boring intendeds in the history of cinema – go off without a hitch. Any five minutes of an old '40s or '50s Tom & Jerry cartoon are preferable to, and certainly funnier than, the 100 exhausting minutes spent here. Rather than leaving you with content, those shorts simply left you content.