Whipping Boy: "Indiana Jones & the Kingdom of the Crystal Skull" 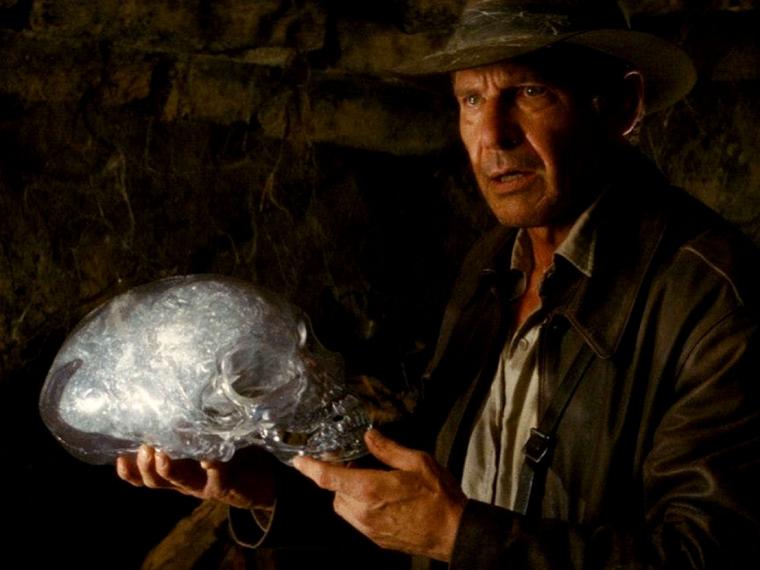 Harrison Ford in Indiana Jones & the Kingdom of the Crystal Skull

INDIANA JONES & THE KINGDOM OF THE CRYSTAL SKULL

We'll get to Spielberg, Ford, and all manner of chases, escapes, and effects soon enough, but allow me to ask: Has any performer ever seemed as irrepressibly, irresistibly happy on-screen as Karen Allen in Indiana Jones & the Kingdom of the Crystal Skull?

As you no doubt remember, Allen played Marion Ravenwood - the yin to Indy's yang - in Raiders of the Lost Ark, and when she first makes eye contact with Harrison Ford's fedora-wearing, whip-cracking archaeologist in this fourth, much-delayed installment from director Steven Spielberg and producer/co-screenwriter George Lucas, Allen unleashes a smile so incandescent that you can't help smiling back. From the minute she appears, the actress' well-timed return seems almost magically right, and your fond memories of Allen's Marion become immediately tied to your fond (for some, rabidly fond) feelings toward the series itself. Whether she's dodging poisoned darts or trading barbs with Ford or merely beaming at the camera with that spacey, crinkly-eyed radiance of hers, Allen exudes a very special kind of good cheer in Crystal Skull - the uncontainable joy of someone who's ecstatic just to be invited to the party - and, I'm delighted to report, her spirit appears to be contagious.

Heretical though the sentiment may be, some of us, over the past decade or so, have grown positively exasperated with Harrison Ford, thanks to too many grimly stoic performances in too much Hollywood swill. (Firewall? Random Hearts? Six Days, Seven Nights? Really?) But when Indiana finally lays eyes on Marion, the moment might stand as the most honest, enjoyable bit of acting Ford has delivered in ages. Flashing an unguarded goofus grin that's unlike any we've ever seen from the actor, Ford's sardonic, normally unflappable adventurer suddenly looks like he's ready to sing in a musical, and his already quick-witted performance becomes even more robustly comedic; there was reason to expect Ford to be good in Crystal Skull, but who could've guessed he'd be surprising?

Indy loves seeing Marion, she loves seeing him, we love seeing them, and that, in a nutshell, is the experience of Indiana Jones & the Kingdom of the Crystal Skull, at least if you're old enough to remember enjoying its predecessors in the theaters. Younger crowds will likely have a blast at the film (I saw it during a sparsely populated, Friday-morning screening with no kids in attendance), but as some who hasn't seen an Indiana Jones outing since Last Crusade's 1989 debut - not even on video - I think a healthy dose of nostalgia will aid your enjoyment immensely. As summer blockbusters go, I consider Iron Man to be the better movie, yet I actually had a better time at Crystal Skull; there's a unique thrill to be had in watching the movie's, shall we say, mature participants rediscover some of the charge from their (relatively) youthful days of Raiders. At times, no one appears to be relishing this charge more than Spielberg. After nearly 20 years of projects that have included Schindler's List, Saving Private Ryan, and Munich, the pressures to replicate the carefree, throwaway diversions of the Indiana Jones series must have been enormous, but when the director is at his best here - which is often - the strain doesn't show.

Crystal Skull's opener, with Indy hunting down a sort of magnetized mummy (it's better not to ask) and escaping a battalion of armed Soviets (led by Cate Blanchett with a wobbly accent and wicked gusto) sets a high standard right off the bat. Yet within minutes, the prelude's witty, kinetic action choreography is topped by a subversively funny sequence that finds Indy trapped in a nuclear-testing site, and from then on the movie produces one giggly rush after another: a breathless motorcycle race through a college campus; a vicious attack by what looks like the cast of Apocalypto; an extended jungle chase that finds Shia LaBeouf (sensationally entertaining as Indy's protégé) swinging on vines à la Tarzan and engaging in swordplay with Blanchett atop two speeding vehicles. There's more than technical wizardry on display here; there's elation - Spielberg wants to thrill you, and does thrill you, but only if he can make you laugh at the same time. The sillier the movie becomes, the more satisfying it becomes.

It's not like there isn't plenty to be derisive toward. When Spielberg aims for comedy that's not blended with the action, the results border on the embarrassing - LaBeouf enters the picture in a silly, meaningless nod to Brando in The Wild One, and the director has way too much fun with a team of groundhogs that could be cousins to Caddyshack's dancing gopher - and plenty of viewers will no doubt be turned off by the movie's unexpected sci-fi bent. (Spielberg and company have somehow fashioned a continuation of Raiders and Close Encounters in the same breath.) Yet if you don't spend too much time thinking about it, Indiana Jones & the Kingdom of the Crystal Skull is a reunion tour that's an almost rapturous amount of fun - Shine a Light with flesh-devouring ants.