With award-winning, Billboard-charting, Grammy-nominated artists performing on the banks of a mighty river, the Mississippi Valley Blues Festival returns to Davenport for its 35th incarnation on September 17 and 18, the LeClaire Park event (hosted by the Mississippi Valley Blues Society) featuring nine thrilling concert sets by the likes of John Primer, Toronzo Cannon, Joanne Shaw Taylor, and Eric Gales.

This year's festival begins on Friday with a 5 p.m. set by John Primer, a two-time Grammy Award nominee and past winner of the Mississippi Valley Blues Festival's River Road Lifetime Achievement Award. A Mississippi native, Primer moved to Chicago in 1963, formed his own band The Maintainers with Pat Rushing on Maxwell Street, and played with the legendary Sammy Lawhorn and Junior Wells at Theresa's Lounge. He went on to tour with Willie Dixon and his Chicago Blues All-Stars Band and perform with Magic Slim & the Teardrops for 14 years, and in 1995, Primer began leading his own ensemble The Real Deal Blues Band. He has consequently recorded more than 87 albums, 17 of them under his own name, and has written and produced more than nearly five dozen songs on numerous record labels, including his own Blues House Productions. To date, Primer has earned two Grammy nods, two Lifetime Achievement Awards, a Blues Music Awards, a Blues Blast Award, and induction into the Chicago Blues Hall of Fame.

Jontavious Willis plays the Blues Fest on Friday at 6:45 p.m. The 24-year-old multi-instrumentalist was himself nominated for a Grammy (for Best Traditional Blues Album) in 2020 thanks to his latest recording Spectacular Class. Through original lyrics written by the artist, this gifted musician delivers a timeless album that features dynamic vocals and all types of blues, among them Delta, Piedmont, Texas, and Gospel. Willis' stand-out fingerpicking, flat-picking, and slide prowess are continually on display, and the artist's talents inspired blues great Paul Oscher to rave, "When I heard him play, I said to myself: 'This is how the blues, as I know it, is going to stay alive.'"

Friday's 8:15 p.m. set is reserved for Chicago's Toronzo Cannon and his band. Cannon was born in the Windy City on February 14, 1968, he bought his first guitar at age 22, and his natural talent enabled him to quickly master the instrument. Although his initial focus was reggae, Cannon found himself increasingly drawn to the blues, saying, "It was dormant in me. But when I started playing the blues, I found my voice and the blues came pouring out.” He absorbed sounds, styles, and licks from the likes of Buddy Guy, Albert Collins, Hound Dog Taylor, B.B. King, Albert King, Freddie King, Jimi Hendrix, and others. But although he was influenced by many, Cannon’s biting, stinging guitar sound is all his own. Reviewing the artist with five albums and a Blues Music Award nomination to his credit, Blues Matters magazine wrote, "Toronzo is the real deal. Blistering guitar and inventive songs: jealousy, double-crossing, knives and hand grenades ... Chicago style.” 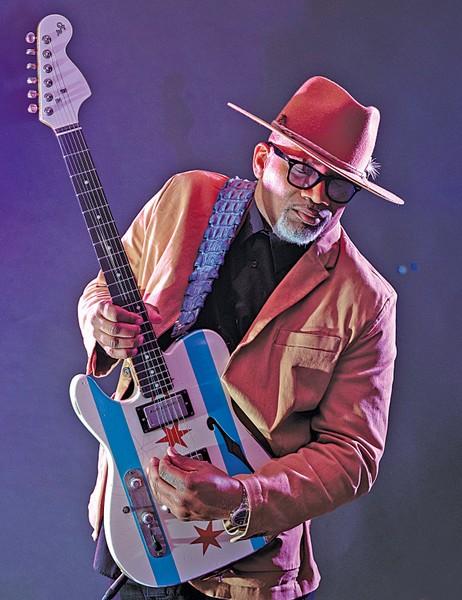 Wrapping up the Blues Fest's September 17 lineup is a 10 p.m. set with Southern Avenue, 2021 Blues Music Award nominees for “Band of the Year.” Based in Memphis, this fiery five-piece has performed in more than 15 countries and has wowed audiences at festivals such as Bonnaroo, Firefly, Electric Forest, Beale Street Music Festival and Lockn’. Relix calls them “a deeply soulful Memphis blues band that’s turning the scene on its head,” and No Depression commented that it's "easy to imagine Southern Avenue as a house band in their native Memphis or Muscle Shoals in the glory days of the '60s, sent back to the future to save us from inauthenticity and our collective hurt."

On Saturday, September 18, this year's Blues Fest continues at 2 p.m. with a concert by the Stephen Hull Experience. A Wisconsin native, Hull is a self-taught blues artist who’s been playing since age 14. Considered by many to be a young B.B. Or Albert King, the 21-year-old from Racine picked up the guitar seven years ago and started the Stephen Hull Experience in 2018, playing gigs in southeastern Wisconsin and the Chicago area ever since. Hull states that when he is playing the blues, he can feel himself flow through his guitar and the music takes over his entire body. “I've had several moments on stage where it's just like, 'I'm not playing that guitar,'" he says. "'I don't know who is but it sure sounds good.' It has to come from your soul, and has to be a 100-percent vibe.”

Florida-based blues artist Selwyn Birchwood continues the festival at 3:45 p.m. Birchwood was the winner of the Blues Foundation’s International Blues Challenge, as well the Albert King Guitarist of the Year Award, citations presented at the same 2013 event. With the artist equally gifted on electric guitar and electric lap-steel guitar, Living Blues magazine said, "Selwyn Birchwood is making waves, surprising people, and defying expectations. Be on the lookout. He revels in the unexpected." The Tampa Tribune raved that Birchwood plays with "power and precision reminiscent of blues guitar hero Buddy Guy. He is a gritty vocalist [who is] commanding with his axe." Rolling Stone stated, "Birchwood is a young, powerhouse guitarist and soulful vocalist. Don't Call No Ambulance is a remarkable debut by a major player." And the Washington Post extolled, "Selwyn Birchwood is an indelibly modern and original next-generation bluesman; his tough vocals, guitar and lap steel touch on classic Chicago blues, Southern soul, and boogie."

A singer/songwriter, guitarist, activist, and actress, Melody Angel plays Saturday's 5:30 p.m. set. Her unique mix of blues and rock 'n' roll may remind audiences of one of her biggest influences, Jimi Hendrix, but she has a look and sound all her own. Angel's new full-length album She Black delivers an honest account of what it feels like to be a black woman in America today. With her songs including "Freedom," "Invisible Girl," "Give the Power to the People," and the album's title track, Angel’s songwriting prowess is only matched by the high-energy live performances that she’s given around the world – from the Chicago Blues Festival stage to the Byron Bay Blues Fest in Australia – and on the MTV show P Diddy's Starmaker. 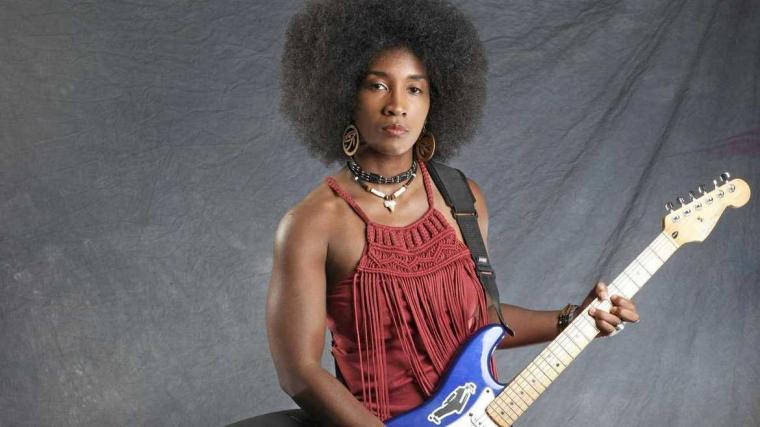 The first woman, in 2014, to win the Blues Foundation's Blues Music Award for Best Instrumentalist - Bass, Danielle Nicole plays the Blues Fest on Saturday at 7:15 p.m. A founding member, lead singer, and bass player of the internationally acclaimed blues/rock band Trampled Under Foot, Danielle Nicole Schnebelen stepped out on her own in 2015 with her debut album Wolf Den. In 2018, Nicole returned with Concord Records' follow-up release Cry No More, garnering a 2019 Grammy Nomination for Contemporary Blues Album and two Blues Music Awards for Best Bassist and Best Female Contemporary Artist among a slew of Blues Blast Music Awards and three Independent Blues Awards.

Wrapping up the 2021 Blues Fest on Saturday will be a 10:30 p.m. performance with Eric Gales. As of 2019, Gales had recorded 18 albums for major record labels in addition to his frequent session and tribute work, and he has also contributed vocals on several records by the Memphis rap groups Prophet Posse and Three 6 Mafia under the name Lil E. After 15 years of professional performance, Gales, in 2006, recorded the album Crystal Vision for Shrapnel Records and set the stage for his Blues Bureau Division follow-up The Psychedelic Underground. In 2010, the artist released the critically successful Relentless, following it up with the equally powerful Transformation, and delivered deeply personal and introspective works in 2018’s Middle of the Road and 2019’s The Bookends. Given his talent and accolades, it’s no wonder that Taylor is many a guitarist's favorite guitarist, counting fans in the likes of Carlos Santana, Dave Navarro (Jane’s Addiction, Red Hot Chili Peppers), Mark Tremonti (Alter Bridge), Joe Bonamassa, Tony Rombola (Godsmack), and Tosin Abasi (Animals as Leaders).

In addition to the nine concert sets, the Blues Fest will again host interactive BlueSkool workshops where attendees can learn the history of, listen to, and play the blues, with this year's guests on September 18 including Hal Reed at 3 p.m., David Berntson at 4 p.m., and Ben Schwind at 5 p.m. Advance tickets to Blues Fest are $15-25 per day and $35 for two-day passes, and more information on the 2021 Mississippi Valley Blues Festival are available by visiting MVBS.org/blues-fest.