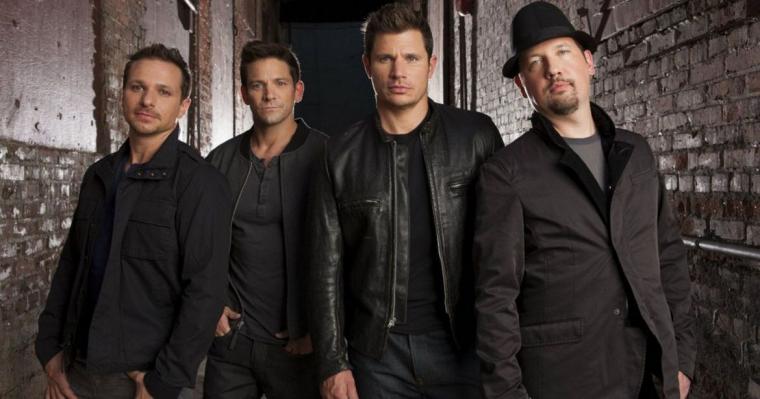 Widely adored for such hit singles as “Because of You,” “The Hardest Thing,” and their chart-topper “Thank God I Found You,” the pop and R&B sensations of 98° take the stage at Davenport's Rhythm City Casino Resort Event Center on May 11, reuniting almost exactly 20 years after the Billboard Music Award nominees won their Teen Choice Award in the “Breakout Artist” category.

Composed of Ohio natives Nick Lachey, his brother Drew Lachey, Justin Jeffre, and Jeff Timmons, 98° was formed by Timmons in Los Angeles toward the end of the 1990s, with the quartet taking its vocal inspiration from such groups as Boyz II Men, Take 5, and Joedci. In 1997, their debut single “Invisible Man” peaked at number 12 on the Billboard Hot 100, achieving gold-record status after its July 1997 release, and the band quickly went on to tour extensively, performing in Asia and on several dates of Janet Jackson's Velvet Rope Tour. Between 1997 and 2002 98° wound up selling 10 million records, scored the number-one single “Thank God I Found You” with Mariah Carey and Joe, and collaborated with their collective idol Stevie Wonder on “True to Your Heart” for the 1998 animated Disney film Mulan. Their smash-hit album 98° and Rising spawned the top-five favorites “Because of You,” “I Do,” and “The Hardest Thing,” while 2000s Revelation, which sold two million copies, peaked at number-two on the Billboard 200 and yielded a trio of hits in “Give Me Just One Night (Una Noche),” “My Everything,” and “The Way You Want Me To.”

In 2001, the quartet decided to take a break, but the vocalists' sold-out reunion tours in 2013 and 2016 proved a high demand for 98°. The musicians consequently recorded and released its first full-length Christmas album in 18 years – Let It Snow – and last year, they embarked on a highly successful 31-city tour across the U.S. in support of the release, delivering spirited performances on such programs as Good Morning America, Today, and Kelli & Ryan.

Over the past 15 years, all four members of 98° have also enjoyed careers outside the band. Nick Lachey, who was recently on Season 25 of Dancing with the Stars, launched a successful solo music career and has starred on TV shows both as an actor (Charmed, One Tree Hill) and as a television host (VH-1's Big Morning Buzz Live, NBC's The Sing-Off). Drew was crowned the season-two winner of Dancing with the Stars and appeared on Broadway in Monty Python's Spamalot and Rent. Timmons joined members of Backstreet Boys and 'NSYNC for VH-1's Mission Man Band and Nick Carter's sci-fi feature Dead Seven. And Jeffre is involved in various media- and cause-related projects stemming from his foray into politics as a mayoral candidate of Cincinnati.

98° plays Davenport's Rhythm City Casino Resort Event Center on May 11, admission to the 8 p.m. concert is $30-65, and more information and tickets are available by calling (844)852-4386 or visiting RhythmCityCasino.com.