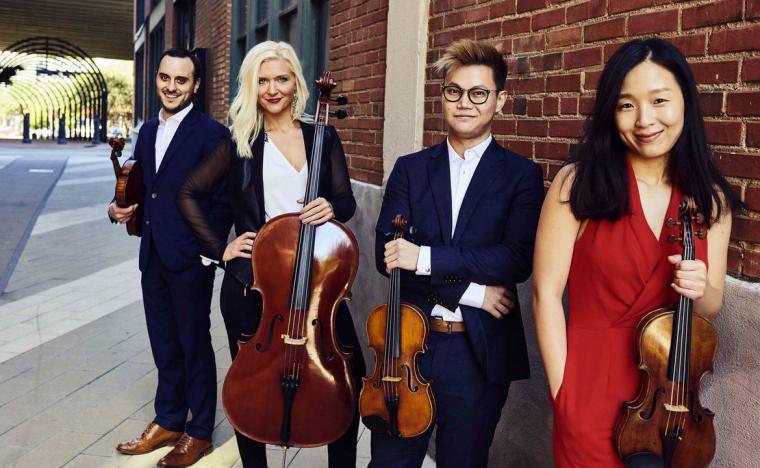 Composed of of violinists Hyun Jeong Helen Lee and David Do, violist John Batchelder, and cellist Brooke Scholl, the award-winning Julius Quartet performs locally as part of Quad City Arts' Visiting Artists series, the musicians' September 23 through 27 engagements demonstrating why, according to a Collegiate Times concert review, “The group left the audience mesmerized by its resonant sound.”

Formed in the fall of 2012, the Julius Quartet first held a special residency as “The Boston Conservatory’s Honors String Quartet,” and currently serves as the Peak Fellowship Ensemble-in-Residence at the Meadows School of the Arts at Southern Methodist University. Previously, the group was the Graduate Quartet-in-Residence at the John J. Cali School of Music at Montclair State University, where they worked intensely with the celebrated Shanghai Quartet. As passionate chamber musicians, the quartet strives to not only explore the extensive quartet repertoire, but also to present a unique collective voice within the music. Recognized for the musicians' high level of artistry, the Julius Quartet was awarded First Prize at the Chamber Music Yellow Springs Competition, First Prize at the first annual MA-ASTA String Quartet/Quintet Competition, and was nominated for the Harvard Musical Association’s Arthur Foote Award.

The Julius Quartet gave its Carnegie Hall debut in March of 2016, and has subsequently performed recitals in various venues such as Stanford University's Bing Concert Hall, Virginia's Moss Arts Center, and Boston's Museum of Fine Arts. Additionally, the group has been featured repeatedly in the Music from Salem festival, where the performers have collaborated with such noted artists and directors as Rhonda Rider, Lila Brown, and Judith Gordon. This past February, the Julius Quartet collaborated with The Sixth Floor Museum at Dealey Plaza and award-winning Texas composer Jesus Martinez in tribute to both the museum’s 30th anniversary and the 55th anniversary of President John F. Kennedy's assassination, performing the newly commissioned work “The Sixth Floor” – a stirring journey from the darkest days of 1963 to a deeper understanding of Kennedy's enduring legacy. Maintaining an active performance schedule during the summer, as well, the quartet has participated in numerous festivals such as the St. Lawrence String Quartet Seminar, McGill International String Quartet Academy, the Chamber Music Residency at The BANFF Centre, and the Apple Hill Center for Chamber Music.

The Julius Quartet plays its September 27 public concert at the Bettendorf High School Performing Arts Center, with the show starting at 7 p.m. and admission $5-10. Its musicians will perform free, abbreviated versions of their full concert at Muscatine's Wesley United Methodist Church (400 Iowa Avenue) at 2 p.m. on September 23, and in Building 4's Room 115 at Moline's Black Hawk College (6600 34th Avenue) at 10 a.m. on September 25. And a PASS-event concert will be held in a private jet hangar at the Davenport Municipal Airport (9010 North Harrison Street) at 6:30 p.m. on September 26, with $50 admission including cocktails, hors d'oeuvres, and a Q&A session.

For more information on the Julius Quartet's area residency, and more on the 2019-20 Visiting Artists season, call (309)793-1213 or visit QuadCityArts.com.