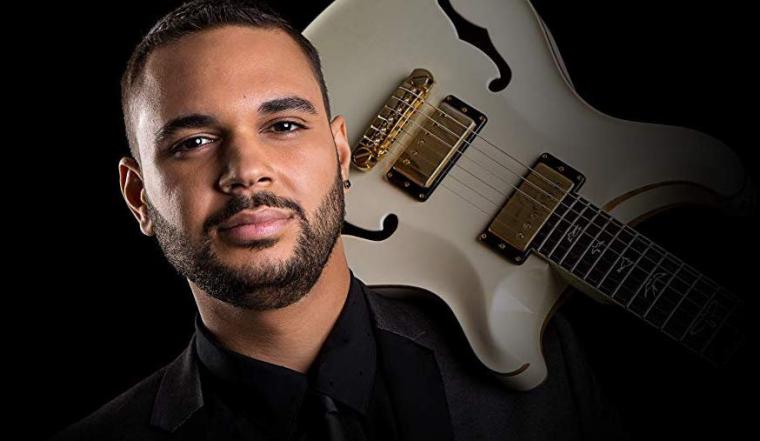 A much-lauded jazz guitarist whose career boasts nine number-one hits, four of them chart-topping singles that debuted over the past five years, Adam Hawley plays Davenport's Redstone Room on October 15 as the latest guest in the venue's popular Smooth Jazz Series, the artist described by Jazz Guitar Today as “a true guitar powerhouse.”

Born and raised in Portland, Oregon, Hawley began piano lessons at age eight and guitar lessons at nine, and eventually attended the University of Southern California, ultimately earning his Bachelor's, Master's, and doctorate degrees in music. Admired for his groove-oriented R&B and jazz stylings, Hawley worked with numerous marquee jazz and pop musicians for more than a decade before signing with Kalimba Music (founded by Maurice White of Earth, Wind, & Fire) in August of 2015. His solo career was consequently launched with Just the Beginning, a 2016 debut that featured chat-topping singles in “35th Street” (which spent five weeks at the top of the Billboard Smooth Jazz Chart) and “I Don't Mind,” plus a number-two Billboard smash in “Joy Ride.” Additional hits followed in 2018's Double Vision (featuring number-one singles “Can You Feel It” and “Take It Back”) and 2020's Escape (boasting Billboard Song of the Year “To the Top”), with Hawley's fourth album Risin' Up released this past September 10.

Frequently referred to as a “guitarist to the stars,” Hawley has played in a variety of live and studio settings with such pop, jazz, and R&B talents as Natalie Cole, Jennifer Lopez, Dave Koz, Brian Culbertson, Rick Braun, Brikan McKnight, Gerald Albright, Manhattan Transfer, and Peabo Bryson. His tour stops have found the artist performing at such annual events as the Newport Beach Jazz Fest, the Cancun Jazz Fest, the Napa Valley Jazz Getaway, and the Catalina Jazz Fest. And beyond performing at more than 50 touring destinations per year, Hawley currently teaches at California's Musician's Institute, Chaffey College, and Saddleback College, and has conducted master classes at institutions including the University of Southern California and the University of Colorado – Denver.

Adam Hawley plays the Redstone Room at 8 p.m. on October 15, admission is $30-35, and more information and tickets are available by calling (563)326-1333 and visiting RiverMusicExperience.org.