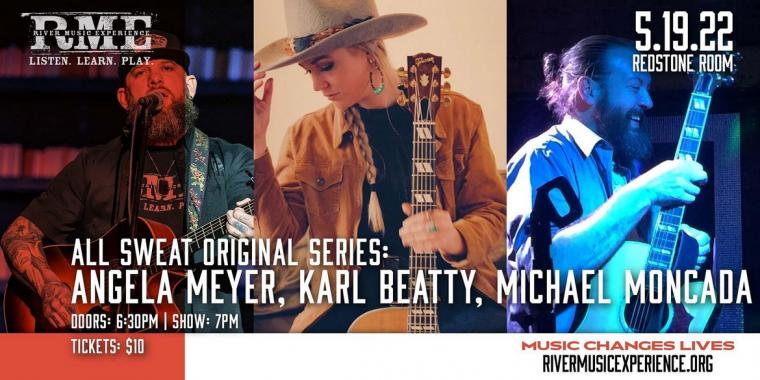 All Sweat Original Series: Karl Beatty, Angela Meyer, and Michael Moncada at the Redstone Room -- May 19.

Continuing the Redstone Room's concert-event programming under the "All Sweat Original Series" banner, in which local songwriters are paired up alongside outstanding area musicians to act as their own personal backing band, the Davenport venue will host three sensational headliners in its May 19 presentation: Karl Beatty, Angela Meyer, and Michael Moncada.

Singer/songwriter and guitarist Beatty hosts an open-mic on Tuesdays at Pub 1848 in Downtown Moline, also playing in the acoustic duo Karl & Ko Acoustic Awesome Sauce, while Meyer was raised in rural Iowa by a family centered around country music. Her new album Legions & Legends is a collection of 10 stories that pay homage to the Midwestern way of life. Often cyclical, this journey is paved by ancestral footsteps and lit by neon signs, and as the artist states, "Along the way, we trip over the roots of our family trees, finding routine in bad habits, falling in love and setting the tone for future generations. At times, we resent the places we come from, but we never leave- they built us a legacy."

Even before she could talk, Meyer was singing along with the radio and introduced to her musical heroes through her grandparents’ record player in their Iowa farmhouse. At 10 years old, they gave her a guitar for Christmas, but it was so large she had to lay it across her lap to learn how to play it. She finally revisited the guitar at fifteen, starting to write her own songs and creating the foundation that has built her dream into a lifelong career.

The Redstone Room's All Sweat Original Series event featuring Karl Beatty, Angela Meyer, and Michael Moncada takes place on May 19, admission to the 7 p.m. concert is $10-75, and more information and tickets are available by calling (563)326-1333 and visiting RiverMusicExperience.org.