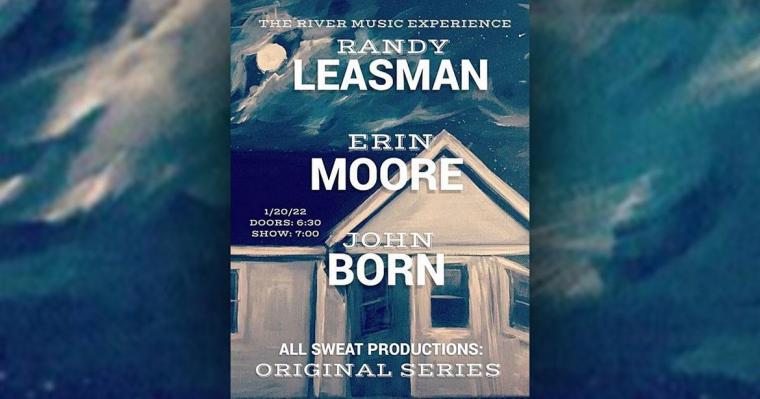 In the Redstone Room's first concert event under the "All Sweat Original Series" banner, local songwriters are paired up alongside topnotch area musicians to act as their own personal backing band, with this January 20 explosion of community and fun showcasing three exceptional headliners on the Davenport stage: Randy Leasman, Erin Moore, and John Born.

Born in Davenport, Leasman grew up in the Quad Cities absorbing the sounds all around him., from Catholic hymns during grade school mass to the Latin rhythms of Chicago bands hired to play local weddings and quinceañeras. MTV, classic-rock radio, and the Mississippi Valley Blues Festival were also crucial in Leasman's musical development. Beyond being a solo artist, the singer/songwriter has also performed, written, and recorded with many groups over the years including the Candymakers, the Low Down, the Zach Harris Band, and, currently, the Avey Grouws Band. Leasman is also an instructor at Kidstock and the Ellis Kell Winter Blues Camp at the River Music Experience, and he released his latest album Forever Loving Living Fantasy in November of last year.

Back when RIBCO and Rascals were just about the only venues in the Quad Cities that started with the letter "R," a 16-year-old Erin Moore was sneaking into Hunter’s Club, Big Papa’s Palace, Stickmans, the Wagon Wheel, and Stub’s Eddy to experience live music. This OG from the QC first cut her teeth battling her stage fright at open mics at Blackthorn Pub, 11th Street Precinct, Stacys, and the Bier Stube in the Village of East Davenport, and when the RME, Rozz-Tox, the Rust Belt, the Renwick Hotel, and the Raccoon Motel popped up, they added fuel to Moore's growing fire. Moore has recorded original music projects with BEEs, the Candymakers, and Busted Chandeliers, and although she pays the bills being a librarian, she dreams of how lovely it would be to open another music venue and name it something righteous -- something definitely beginning with the letter "R."

Born was born in Davenport but raised in a small town in Illinois, and as he concentrating mostly on sports and art as a youth, he didn’t pick up the guitar until the end of his senior year of high school. Drawing mostly from, grunge, alternative, metal, punk, and, of course, the regional country music of his youth, Born immediately started to write songs of his own. While many of those compositions reflect familiar themes of chasing girls and late-night hell-raising, others lean toward his love of history and film. “I want to write rock songs," Leasman has said, "that sound like where I’m from, what I believe, and what I love.”

The Redstone Room's All Sweat Original Series event featuring Randy Leasman, Erin Moore, and John Born takes place on January 20, admission to the 7 p.m. concert is $10-50, and more information and tickets are available by calling (563)326-1333 and visiting RiverMusicExperience.org.