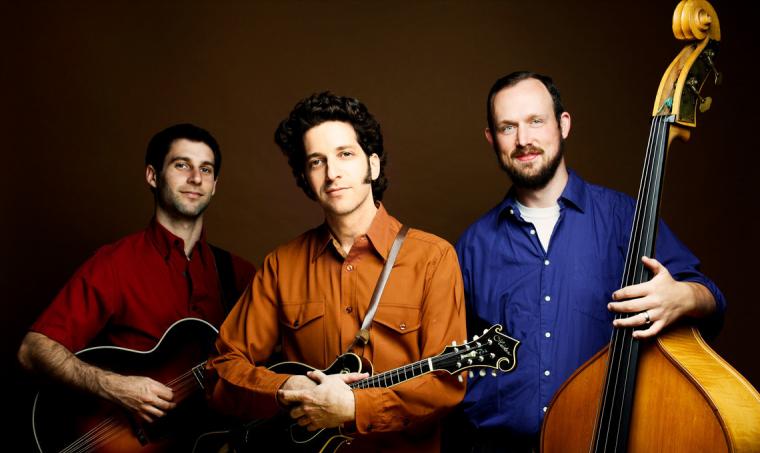 Praised by R2 magazine for their “raw and grooving bluegrass music played with the grace and sophistication of a classical string quartet,” the Canadian musicians of the Andrew Collins Trio open Quad City Arts' 2019-20 Visiting Artists season with several ocal performances including a September 20 engagement as guests of Davenport's Bucktown Revue, the Toronto Star calling its bandleader “light of touch, fast of wit, copiously imaginative, and a musical scholar of the highest order.”

Musical maestro Collins is currently at the epicenter of Canada’s burgeoning acoustic/roots music scene, having co-founded such noteworthy Canadian bands as the Creaking Tree String Quartet, the Foggy Hogtown Boys and, most recently, his namesake Andrew Collins Trio. A prolific, robust performer comfortable on mandolin, fiddle, guitar, mandola, and mandocello, Collins composes, produces, arranges, writes, and teaches across multiple genres, including a popular collision of folk, jazz, bluegrass, Celtic, and classical. Having earned seven Canadian Folk Music Awards and five Juno Award nominations as a solo artist and with his various ensembles, the musician has recently been focusing on his work with his fellow Andrew Collins Trio members: Mike Mezzatesta, a versatile artist on guitar, mandolin, fiddle, and mandola, and James McEleney, the gifted vocalist and bass and mandocello player.

Bending and blending genres, these musical shape-shifters land somewhere between the re-imagined worlds of Béla Fleck and Newgrass invader David Grisman, and the ensemble's most recent double album Tongue & Groove grafts 11 vocal cuts with 11 instrumentals to create a back-to-basics visitation on what the band is best known for: stage spontaneity and rapid-fire, improvisational exchanges. According to Exclaim!, “To call Andrew Collins a master of the mandolin would be putting it mildly,” with the magazine also lauding its “artfully arranged string music perhaps best described as 'chambergrass.'” Spill magazine lauded the trio's “compositional virtuosity” that finds the musicians “rendering poetry out of strings.” And Earshot raved, “Simply put, this is a stellar band that resists categorization and one that will expand the listener's range and appreciation of style.”

The Andrew Collins Trio plays its official public concert on September 20 as part of the season-opening presentation of the Bucktown Revue – the Nighswander Theatre's variety show that showcases various styles of folk and Americana music on the third Friday of the month (September through May) at 7 p.m. The trio will also perform abbreviated versions of its full concert at Moline's Butterworth Center (1105 Eighth Street) at 3 p.m. on September 17; at the Bettendorf Public Library (2950 Learning Campus Drive) at 2 p.m. on September 18; and at the Muscatine Art Center (1314 Mulberry Avenue) at 6 p.m. on September 19.

For more information on the Andrew Collins Trio's area residency, and more on the 2019-20 Visiting Artists season, call (309)793-1213 or visit QuadCityArts.com.