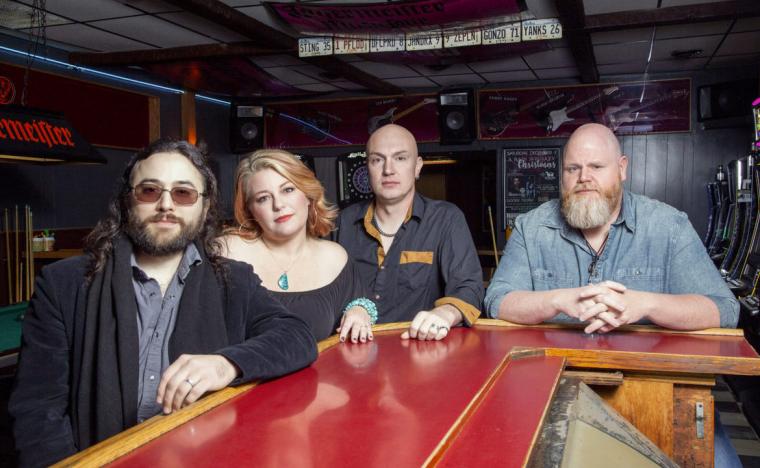 A beloved Quad Cities ensemble that, as stated in DownBeat magazine, “channels its pent-up enthusiasm and not-slight musical ability toward an individuated brand of blues-rock,” the talents of the Avey Grouws Band play an October 1 concert at Davenport's Gypsy Highway Bar & Grill in support of Tell Tale Heart, the group's sophomore album – released on September 24 – that follows the critical and commercial success of 2020's The Devil May Care.

Composed of vocalist/songwriter Jeni Grouws, guitarist/songwriter Chris Avey, drummer Bryan West, bassist Randy Leasman, and keyboardist Nick Vasquez, the future members of the Avey Grouws Band met in 2015 at Bettendorf blues bar The Muddy Waters. Then working as a morning-radio personality, Grouws was in town on business, and dropped by the venue to hear a blues jam led by West, Avey, and Chris’ brother Mark Avey. Grouws, trained early in piano, trumpet, and vocals, and Chris Avey, a self-taught guitarist, subsequently performed for a year as a duo, and in 2017, West and Leasman joined the pair to form the Avey Grouws Band, with Vasquez joining the lineup in 2019. The group's first album The Devil May Care, released last March, was a significant critical hit, with Blues Blast magazine calling it "an enjoyable and accomplished debut" and Rock and Blues Muse insisting, "Avey Grouws Band rocks it." The album hit number 10 on Billboard's Blues Album Chart, number 24 for 2020 on the Roots Music Report's Top Contemporary Blues Album Chart, and went on to be nominated for four 2021 Independent Blues Awards including Best New Artist and Best New Artist Album. The Devil May Care's single “Rise Up,” meanwhile, was named top song of 2020 in the Ben Vee Roadhouse 66 top songs of 2020, while “Come and Get This Love" won top honors in the Unsigned Only Songwriting Competition.

Hot on the heels of that Billboard-charting album, the Avey Grouws Band unveils their sophomore release Tell Tale Heart on September 24. Recorded in Nashville at East Iris Studios and The Purple House in Leiper’s Fork, Tennessee, the album boasts Grammy Award-winning engineer/producer Casey Wasner at the helm and features 10 original songs that were composed during the 2020 pandemic, many of them direct responses to the international health crisis and political and social turmoil that engulfed the year. The songs are also, as Wasner describes the groups's sound, the epitome of “rock and roll blues soul." As Grouws has said, "Maybe the most important thing to understand about our band is that we are the mix of all of our Middle America backgrounds and experiences. That includes blues, folk, Americana, rock. We take what we have learned from those masters and make the music that feels the most authentic to us. This album is the best work we have ever done.”

The Avey Grouws Band performs in support of Tell Tale Heart at the Gypsy Highway Bar & Grill on October 1, the concert begins at 8:30 p.m., and more information on the ensemble, the engagement, and the new album is available by visiting AveyGrouwsBand.com.