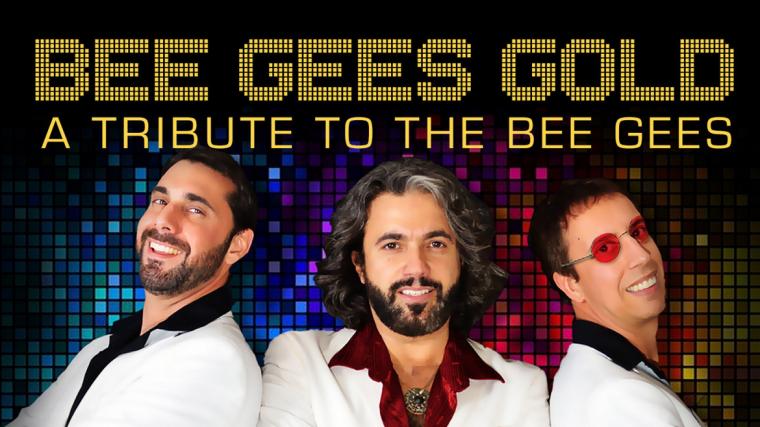 Bee Gees Gold Tribute at the Circa '21 Dinner Playhouse -- August 26.

Presented in conjunction with the theatre's current musical hit Saturday Night Fever, the August 26 concert event Bee Gees Gold Tribute invites audiences to boogie on over to Rock Island's Circa '21 Dinner Playhouse, where touring sensations John Acosta, Daryl Borges, and Jeff Celentano will recreate the look and sound of the brothers Gibb and unforgettable smash hits including “How Deep Is Your Love,” “Tragedy,” “You Should Be Dancing,” and the iconic “Stayin' Alive.”

Formed in 1958 and featuring brothers Barry, Robin, and Maurice Gibb, the Bee Gees were especially successful as a popular music act in the late 1960s and early 1970s, and later as prominent performers of the disco-music era in the mid-to-late 1970s. The group sang tight, recognizable, three-part harmonies; Robin's clear vibrato and lead vocals were hallmarks of their earlier hits, while Barry's R&B falsetto became their signature sound during the '70s and '80s. The Bee Gees wrote all of their own hits, as well as writing and producing several major hits for other artists, and have frequently been referred to as "The Disco Kings."

Born to English parents on the Isle of Man, the Gibb brothers lived in Chorlton, Manchester, England until the late 1950s. In 1955, they formed the skiffle/rock-and-roll group the Rattlesnakes, and after the family's move to Australia, the brothers achieved their first chart success as the Bee Gees with "Spicks & Specks," their 12th single. The brothers Gibb returned to the U.K. in January of 1967, when producer Robert Stigwood began promoting them to a worldwide audience, and a decade later, the Bee Gees' Saturday Night Fever soundtrack proved to be the turning point of their career, with both the film and soundtrack having a cultural impact throughout the world by enhancing the disco scene's mainstream appeal. They won five Grammy Awards for Saturday Night Fever, including Album of the Year, and later won special Grammys of Merit in 2003, 2004, and 2015.

To date, the Bee Gees have sold over 120 million records worldwide, making them among the best-selling music artists of all time. They were inducted into the Rock and Roll Hall of Fame in 1997, with the musicians' citation reading, "Only Elvis Presley, the Beatles, Michael Jackson, Garth Brooks, and Paul McCartney have outsold the Bee Gees." With nine number-one hits on the Billboard Hot 100, the Bee Gees are the third-most successful band in Billboard-charts history, behind only The Beatles and The Supremes.