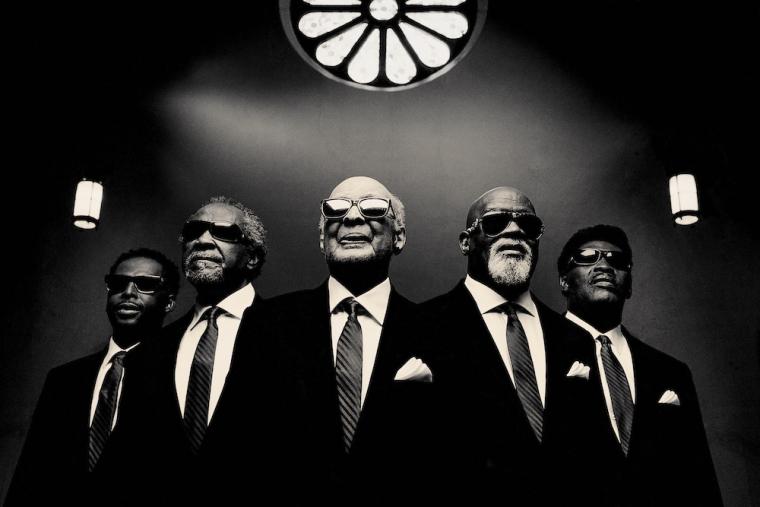 The Englert Theatre presents The Blind Boys of Alabama -- April 2.

Described by The New Yorker as “legendary,” and hailed as “gospel titans” by Rolling Stone, the internationally touring musicians known as The Blind Boys of Alabama will deliver a special, virtual Easter-weekend concert on April 2, the Englert Theatre presentation giving viewers an at-home audience with a group that, according to the New York Times, performs “a livelier breed of gospel music” they made “zestier still by adding jazz and blues idioms and turning up the volume, creating a sound like the rock 'n' roll that grew out of it.”

Founded in 1939 in Talladega, Alabama, and featuring a changing roster of musicians over its history (the majority of whom are or were visually impaired), The Blind Boys of Alabama musicians began their careers touring throughout the South during the Jim Crow era of the 1940s and 1950s. The performers originally flourished due to their unique sound, which blended the close harmonies of early jubilee gospel with the more fervent improvisations of hard gospel, and by the early 1960s, the band was singing at benefits for Dr. Martin Luther King, Jr. and was considered a major a part of the soundtrack to the Civil Rights movement. The Blind Boys of Alabama first found mainstream success following their appearance in Broadway's Tony-nominated musical The Gospel at Colonus in 1983, and received the first of their considerable awards recognition with the release of 1992's "Deep River," which was nominated for Best Traditional Soul Gospel Album at the 36th Annual Grammy Awards.

Since then, The Blind Boys of Alabama – its vocal quintet currently featuring Jimmy Carter, Rocky McKinnie, Ben Moore, Joey Williams, and Paul Beasley – are recognized worldwide as living legends of gospel music. Celebrated by The National Endowment for the Arts and the Recording Academy with Lifetime Achievement Awards, inducted into the Gospel Music Hall of Fame, and the winners of five Grammy Awards, they have attained the highest levels of achievement in a career that spans over 70 years. The Blind Boys of Alabama are known for crossing multiple musical boundaries with their remarkable interpretations of everything from traditional gospel favorites to contemporary spiritual material by songwriters such as Eric Clapton, Prince, and Tom Waits. They have also appeared on recordings with noted artists including Lou Reed, Peter Gabriel, Bonnie Raitt, Willie Nelson, Aaron Neville, Susan Tedeschi, Ben Harper, Patty Griffin and Taj Mahal, and have appeared on The Tonight Show, Late Night with David Letterman, 60 Minutes, The Colbert Report, and many other television programs.

The Blind Boys of Alabama's Easter-weekend special will begin at 8 p.m. on April 2, virtual admission is $18 for a livestream ticket and $25 for a group ticket, and more information is available by calling (319)688-2653 or visiting Englert.org.