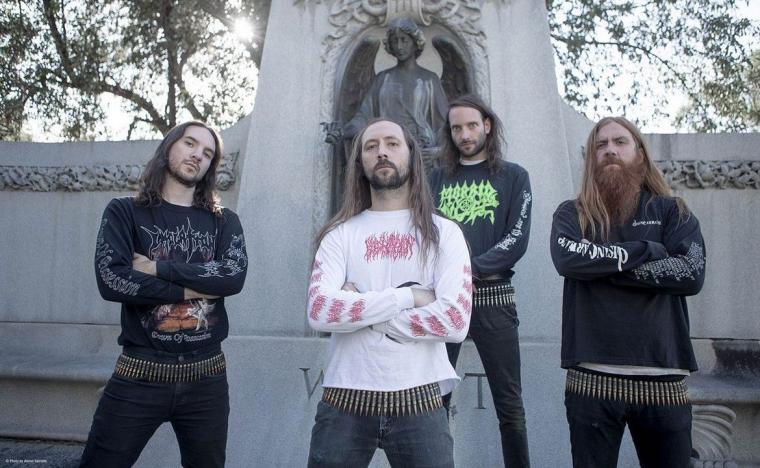 Praised by Invisible Oranges for their “psychedelic take on classic death metal” and by Loudwire for their sound that melds "tectonic riffs, cavernous vocals, and eerie, Dodsengel-like moments of caustic stillness," the rockers of Blood Incantation headline a December 3 concert at Davenport's Raccoon Motel, the group also lauded by Stereogum for "blending the bright melodicism of late-period Death with the alien tones of Morbid Angel circa Domination."

Composed of guitarist and vocalist Paul Riedl, drummer Isaac Faulk, guitarist Morris Kolontyrsky, and bassist Jeff Barrett, Blood Incantation originated in Denver, Colorado in 2011, and immediately caught the attention of death-metal fans and critics, with AllMusic.com admiring their "caustic riffage, eerie flourishes of psychedelia, neck-snapping technical acumen, and lyrics about space and death." The band's gifts were were first put into play on a trio of demo recordings, while a split 7" with fellow Coloradans Spectral Voice was issued ahead of the group's debut EP, 2015's Interdimensional Extinction. Blood Incantation's debut album Starspawn, meanwhile, was released in 2016 through Dark Descent Records, received critical acclaim from Stereogum and Decibel, and was followed by the concert EP Live Vitrification. That recording preceded the arrival of the band's sophomore studio album Hidden History of the Human Race in 2019, a work in which all of the tracks were first performed live at that year's Fire In The Mountains festival in Jackson, Wyoming.

Critics were effusive in their raves. Christopher Luedtke of Metal Injection noted that the timing of disparate elements, sometimes sudden and sometimes expected, was so "coldly calculated it's unreal," adding that the album's last track "weaves [multiple styles and layers] so seamlessly and maintains a pace that makes not a single second of it boring." Jack Kelleher stated in Exclaim! that "you breathe the atmosphere of this record when you listen to it" which is "why you'll return to it again and again." And a Hidden History of the Human Race review in Pitchfork stated that the "music feels meditative, despite all its frenetic motion. They recorded the entire thing – every interlocking part and lightspeed tempo switch – analog, which means that you are hearing a band breathing as an organism, a group of people accomplishing something remarkable when you play it."

Blood Incantation plays their Davenport engagement on December 3 with opening sets by Primitive Man and The Everlasting Light, admission to the 8 p.m. concert is $18, and more information and tickets are available by visiting TheRaccoonMotel.com.