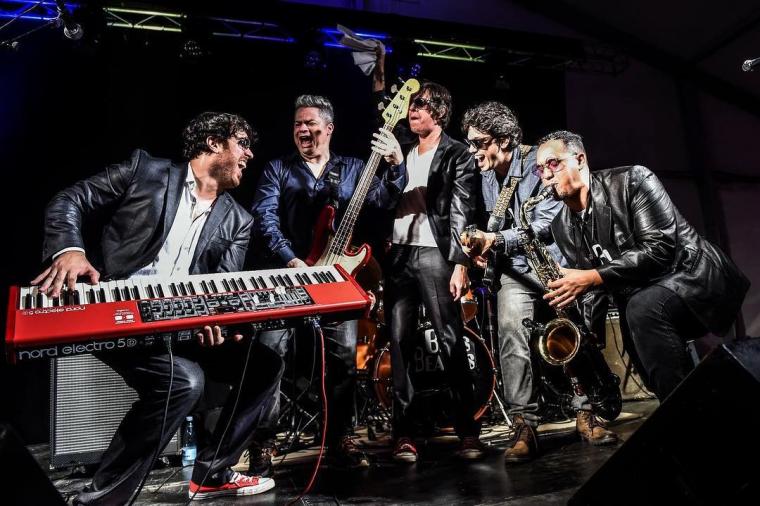 Music lovers wouldn't necessarily consider the musical styles an ideal match. But on September 15, Blues Beatles will wow Rhythm City Casino Resort visitors by instilling the songs of John, Paul, George, and Ringo will distinct blues rhythms and phrasing, with On Stage Magazine raving that the group's Brazilian musicians “seamlessly and successfully melded classic Beatles tunes with deep-down Southern blues. These reinventions of familiar Beatles music lead a listener to wonder what would have happened if the Beatles had signed with Motown through some crazy twist of fate.”

Though the group officially formed in 2013, Blues Beatles originated during breaks in rehearsals for the Brazilian band Today, an ensemble that Marcos Viana (lead vocals), Flavio Naves (keyboards), Lancaster Ferreira (guitar), Bruno Falcão (bass), and Fred Barley (percussion) started in 2010. Viana would invariably pick up his acoustic guitar and start playing Beatles songs, and eventually, his fellow bandmates began adding their own blues twists to Viana's repertoire. Deciding to make their “break band” a professional reality, the musicians released a video of their rendition of the Beatles' “Ticket to Ride” in 2013, a blues-fueled tune that wound up capturing more than two million views on Facebook and catapulting the Brazilian quintet to international-touring fame.

Blues Beatles released its debut CD Get Back to the Blues in 2016, a collection of nine Beatles covers – among them “A Hard Day's Night,” “Yellow Submarine,” Eleanor Rigby,” and “Help” – recorded at the Space Blues Studios in São Paulo, Brazil. Wanting to produce a fuller sound than they'd previously delivered, the five original Blues Beatles asked saxophone player Denilson "Big D" Martins to join them on several tracks, and subsequently invited the musician to join the outfit full-time. Now with Sunwalk replacing Ferrreira on guitar, the group makes regular tour stops worldwide, with Barley telling Wyoming's The Daily News that the group is amassing admirers from two formerly disparate fan bases. “Many people come talk to us after the concerts saying things like ‘I don’t like changes in Beatles’ songs, but you do it very well,” said Barley. “And also there are other people that don’t like the Beatles but love blues, and after seeing our concert, they'll send us messages telling us that they are starting to like Beatles songs!”

Admission to Blues Beatles' 8 p.m. concert on September 15 is $15, and more information and tickets are available by calling (563)328-8000 or visiting RhythmCityCasino.com.