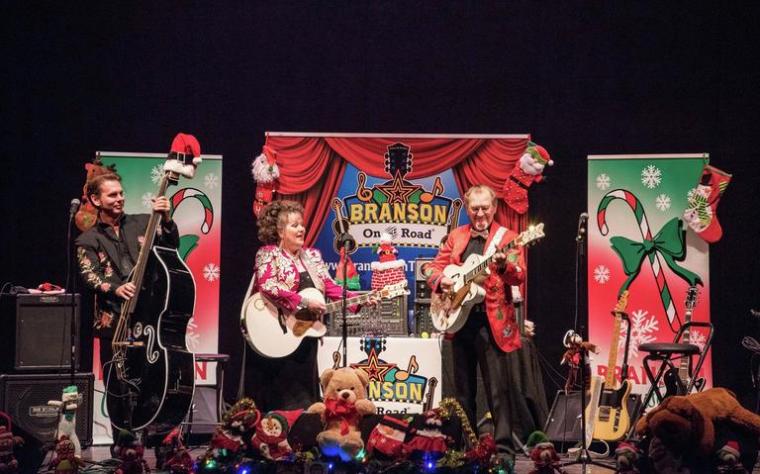 “Branson on the Road: Christmas Style" at the Ohnward Fine Arts Center -- November 27.

Making their fourth appearance at the Maquoketa venue just in time for the holidays, the touring sensations of Branson on the Road: Christmas Style will bring their yuletide-themed blend of bluegrass and rockabilly to the Ohnward Fine Arts Center on November 27, this song- and comedy-filled entertainment reminiscent of the Grand Old Opry and boasting venerable talents in vocalist and host Debbie Horton and multi-instrumentalist Derwin Hinson.

A multi-talented entertainer who also plays lead and rhythm guitar, Horton holds the distinction of being the only woman to have also played lead guitar for country legend Johnny Cash. She hosted her own show at the old Boxcar Willie Theater in Branson and has performed on the famous Louisiana Hayride and Ernest Tubb Midnight Jamboree in Nashville, and Horton was also a radio DJ in Norfolk, Virginia. Beyond acting as emcee for concerts with icons including Kenny Rogers, Hank Williams, Jr., and the Oak Ridge Boys, Horton recently made her debut on the world-famous Grand Ole Opry in Nashville. Among her other credits, the touring musician is an accomplished songwriter, and a number of Horton's compositions have been recorded by Wanda Jackson, Norma Jean, and other significant country-music artists.

A vocalist who has proven equally accomplished on fiddle, guitar, mandolin, banjo, and dobro, Hinson grew up in North Carolina playing and singing in his family's gospel band. In his early 20s, he was hired by Charlie Louvin and found himself on the stage of the Grand Ole Opry the very next week. Later, Hinson toured with Vern Gosdin and was a side-man in Nashville, and the musician hosted a weekly bluegrass night at the Bell Cove Club at which Bill Monroe was a frequent guest. The multi-instrumentalist Hinson has also taught stringed-instrument lessons since 1977, has toured for more than two decades as the "One-Man Gospel Band," and has hosted and facilitated a weekly Bluegrass Jam for going on 20 years. Hinson has stated that he " loves to help people find their best 'self' in music," and traditionally makes merry on the Branson tours as a premier real-bearded Santa Claus.

The touring Branson on the Road: Christmas Style lands in Maquoketa on November 28, admission is the 2 p.m. concert and comedy event is $13-25, and more information and tickets are available by calling (563)652-9815 and visiting OhnwardFineArtsCenter.com.