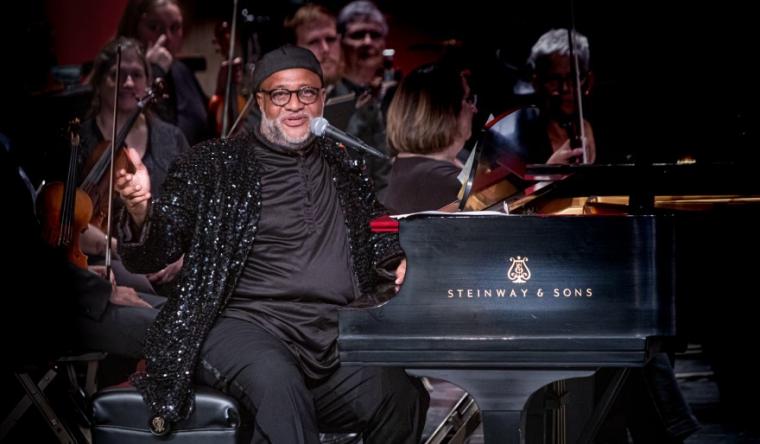 A master pianist with more than four decades of professional accomplishments, Davenport native Byron “BK” Davis serves as the latest featured guest in Polyrhythms' Third Sunday Jazz Series, the noted musician's October 17 concert showcasing the talents of one of only a few hundred elites to carry the title of Steinway International Artist.

Born and raised in Davenport, Davis comes from a truly musical household. His father Bishop Ezekiel Davis conscripted him as a teen to serve as musical director for the seven churches he oversaw, while his mother Rose Davis, an accomplished vocalist, attended to his vocal and instrumental training. Davis is a multi-instrumentalist who plays more than a dozen instruments besides the piano, including guitar, organ, and drums. Jazz, R&B, gospel, soul, and pop are the genres that propelled Davis to travels around the world, and his artistry enticed promoters in Europe, Japan, North America, and on the high seas to book him for concert engagements.

The Steinway International Artist designation is an honor bestowed on pianists with an impressive body of work, and Davis' Steinway peers include legends such as Elton John, Billy Joel, Harry Connick, Jr., and Herbie Hancock. A restless musical intellect, Davis, over four decades, has amassed an impressive and disparate list of accomplishments to his credit. From choir director to band leader to solo artist, he has performed with numerous musical greats, among them Johnnie Taylor, BB King, and Billy Preston, and he has co-written original music with rock-and-roll legend Little Richard, as well as R&B duo McFadden & Whitehead. And in his October 17 concert event for Polyrhythms, Davis will be accompanied by David Sharp on saxophone, Brent Anthony Johnson on bass, Kellen Myers on keyboards, Wes Julian on percussion, and Rick Kislia on guitar, with Natalja Sticco joining the Steinway International Artist as a guest vocalist.

Byron “BK” Davis plays the Redstone Room at 5 p.m. on October 17, admission to the concert is $15, and more information and reservations are available by contacting Polyrhythms at (309)373-0790 and Polyrhythms.org.