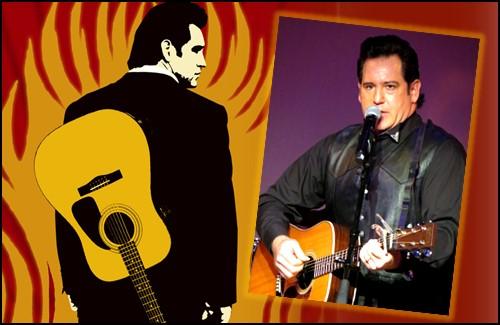 Born in 1932 to poor cotton farmers in Kingsland, Arkansas, Cash rose to fame in the burgeoning rockabilly scene in Memphis, Tennessee, after four years in the Air Force. He traditionally began his concerts by simply introducing himself, "Hello, I'm Johnny Cash", followed by a performance of "Folsom Prison Blues," one of his signature tunes. Other widely loved Cash songs include "I Walk the Line," "Ring of Fire," "Get Rhythm," and "Man in Black," and the artist also recorded hits such as "One Piece at a Time" and "A Boy Named Sue," a duet with his future wife June titled "Jackson," and railroad songs including "Hey, Porter," "Orange Blossom Special," and "Rock Island Line.” Cash is one of the best-selling music artists of all time, having sold more than 90 million records worldwide, and his genre-spanning music embraced country, rock, rockabilly, blues, folk, and gospel sounds. This crossover appeal earned him the rare honor of being inducted into the Country Music, Rock and Roll, and Gospel Music Halls of Fame.

Also born in 1932, Cline is considered one of the most influential vocalists of the 20th century, and was one of the first country-music artists to successfully cross over into pop music. Cline had several major hits during an eight-year recording career shortened by her tragic death in a 1963 plane crash, including two number-one hits on the Billboard Hot Country and Western Sides chart. In 1957, she made her first national television appearance on Arthur Godfrey's Talent Scouts, and after performing "Walkin' After Midnight," the single would become her first major smash on both the country and pop charts. Cline became a member of the Grand Ole Opry in 1960, and a year later, her single "I Fall to Pieces" would become her first to top the Billboard country chart. The subsequent single "Crazy" would quickly become an iconic smash, and other significant Cline hits have included "Sweet Dreams," "Back in Baby's Arms," "She's Got You," "So Wrong," and "Leavin' on Your Mind."

With its headliners backed by the Walkin' the Line Band, the Ohnward Fine Arts Center's Cash & Cline: Country Royalty Tribute Show delivers a family-friendly night of unforgettable hits from its two titular artists, lovingly recreated here by performers Benny Wheels and Lori Gravel. Also a frequent Elvis Presley tribute artist who is a two-time “Images of the King” World Competition finalist, Wheels has spent the last 15 years portraying Johnny Cash in both solo concerts and group efforts. Gravel, meanwhile, is a resident of Otter Creek, Iowa, who served as music director for Ohnward's 2016 production of Hook Jr., and in addition to singing with the Nutsy Turtle Band for the past 27 years, she played June Carter Cash opposite Wheels' Johnny in a previous country-music tribute for the venue.

Admission to Cash & Cline: Country Royalty Tribute Show is $13-25, with the performance starting at 7 p.m. on June 19, and more information and tickets are available by calling (563)652-9815 and visiting OhnwardFineArtsCenter.com.