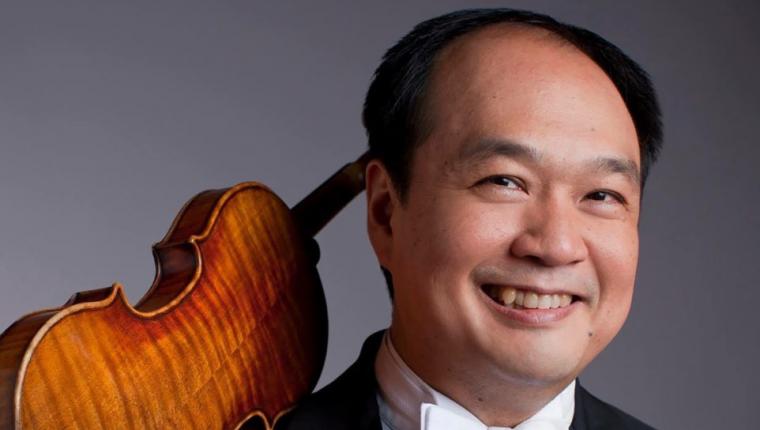 Robert Chen performs in Chamber Music Quad Cities: The Recital at the Unitarian Universalist Congregation of the Quad Cities -- January 13.

Chen has been concertmaster of the Chicago Symphony Orchestra since 1999, and during his nearly two decades in the position, he has been featured as a violin soloist with Riccardo Muti, Daniel Barenboim, and Pierre Boulez, among others. He also delivered the CSO premiere of György Ligeti’s Violin Concerto, Elliott Carter’s Violin Concerto, and Witold Lutoslawski’s Chain Two, and in addition to his concertmaster duties, Chen enjoys a solo career that includes performances with the Los Angeles Philharmonic, Swedish Radio Orchestra, and Moscow Philharmonic. An avid chamber musician, Chen has performed with artists such as Daniel Barenboim, Itzhak Perlman, Pinchas Zukerman, and Yo-Yo Ma; has toured extensively with Musicians from Marlboro; and is a founding member of the Johannes Quartet. Prior to joining the CSO, Chen received both his bachelor's and master's degrees in music from the Juilliard School, and won first prize in the Hanover International Violin Competition.

Loeb served as the Executive Director of the Quad City Symphony Orchestra from 2013 through 2017, and also served as Executive Director of the Greater Bridgeport Symphony and Music Director for the 2011 New Hampshire Music Festival. An accomplished soloist, accompanist, conductor, arranger, educator, art administrator, and entrepreneur, Loeb has also enjoyed partipation in a wide variety of music projects: performing concerts of Beethoven and Bruckner symphonies; recording 16th-Century madrigals with Yo-Yo Ma; touring with popular rock musicians; and premiering cutting-edge, avant-garde contemporary music. Loeb holds a Graduate Performance diploma from the Peabody Conservatory in Conducting, a Master's in Music from the Curtis Institute, a Bachelor of Arts from Harvard Juniversity, and Doctorate in Music Arts from the Juilliard School.