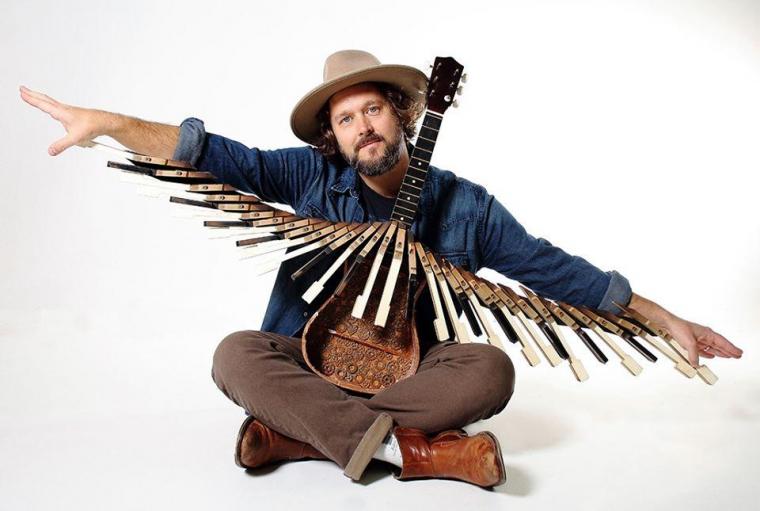 Performing locally in a special event sponsored by Pierce's Promise, beloved folk singer/songwriter Cody Diekhoff – better known by his recording alias Chicago Farmer – plays an October 2 concert at Davenport's Redstone Room, the artist a soulful crooner and guitarist who inspired No Depression to rave, “If the Midwest is looking for a voice, the search is over.”

The son of a small-town farming community, Diekhoff logged plenty of highway and stage time under the name Chicago Farmer before settling in the Windy Cty in 2003. Profoundly inspired by fellow Midwesterner John Prine, the singer/songwriter is a working-class folk musician whose rural roots, tilled with a city-streets mentality, have continually turned heads north and south of I-80. “I love the energy, music, and creativity of Chicago," he says at ChicagoFarmer.com, "but at the same time, the roots and hard work of my small town." Growing up in Delavan, Illinois, with its population less than 2,000, Diekhoff writes music for “the kind of people that come to my shows. Whether in Chicago or Delavan, everyone has a story, and everyone puts in a long day and works hard the same way. My generation may have been labeled as slackers, but I don’t know anyone who doesn’t work hard - many people I know put in 50-60 hours a week and 12 hour days. That’s what keeps me playing. I don’t like anyone to be left out; my music is for everyone in big and very small towns.”

Diekhoff listened to punk rock and grunge as a kid before discovering a friend’s dad playing Hank Williams, which the artist has called "a revelation." Since the release of his 2006 debuts From a Small Town in Illinois and About Time, Chicago Farmer has recorded a pair of EPs in 2011's Gunshots on Tuesday and Somethin' Else, and with additional albums including 2007's Talk of Town, 2013's Backenforth, Il and 2016's Midwest Side Stories, the artist is currently performing in support of his 2020 release Flyover Country. Fellow singer/songwriters have been lavish in their praise, with Todd Snider calling Diekhoff “the genuine heir to Arlo Guthrie or Ramblin' Jack Elliott,” and Pokey LaFarge saying that the musician is “definitely one of my favorite singers out there today.” And critics have been equally ebullient, with Honest Tune stating, “You can smell the dirt in the fields, hear the wind as it blows across the plains, and see the people that Chicago Farmer sings about. Each track captures a moment in time, whether for a person or a particular place. Imagine if a John Steinbeck short story had been written as a song, and this will give you a fairly good idea as to what Chicago Farmer accomplishes on his albums.”

Chicago Farmer plays the Redstone Room at 7:30 p.m. on October 2, admission is $18-22, and more information and tickets are available by calling (563)326-1333 and visiting RiverMusicExperience.org.