“Christmas at Augustana,” December 4 and 5 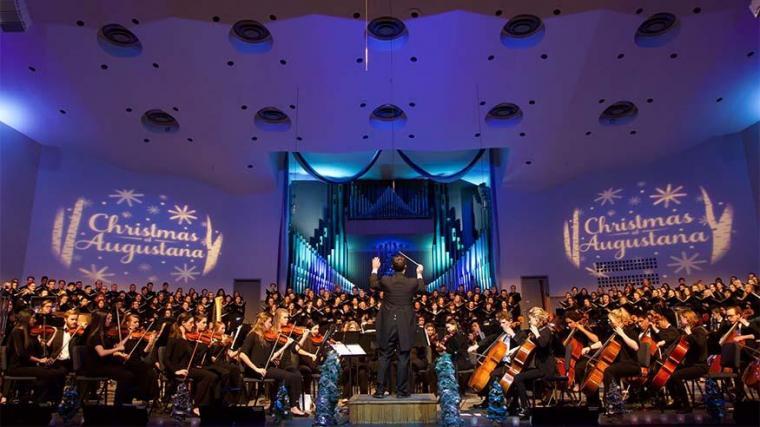 “Christmas at Augustana" in Centennial Hall -- December 4 and 5.

After a virtual version of their annual program was streamed in 2020, a sextet of Augustana College music ensembles reunite in person for December 4 and 5 presentations of Christmas at Augustana, a yuletide celebration at Centennial Hall boasting the collective talents of the Augustana Brass Ensemble, Augustana Symphony Orchestra, Ascension Ringers, Augustana Choir, Jenny Lind Vocal Ensemble, and Augustana Concert Chorale.

A collection of songs and compositions for the holiday season, Christmas at Augustana has been an eagerly awaited tradition since 2018, and boasts the talents of dozens of current students performing in six of the college's dozen-plus music groups. In addition to the horn players of Augustana Brass and the handbell ensemble of Ascension Ringers, the December 4 and 5 concerts will feature the Augustana Symphony Orchestra as conducted by Fernanda Lastra. A full-size symphonic orchestra of 70 to 80 members that typically performs two major programs each semester, its musicians also host a student concert competition, read student orchestral compositions, work with student conductors, and embark on an annual performance tour.

Joining the instrumentalists in Christmas at Augustana are a trio of vocal ensembles. Established in 1931, the Augustana Choir has been conducted by Dr. Jon Hurty since 1996, and under his direction, the group has performed at Orchestra Hall in Chicago, Alice Tully Hall in Lincoln Center, and Carnegie Hall in New York City, in addition to many major cathedrals and concert venues in Sweden, Norway, China, Germany, Italy, Austria, Japan, Korea, Spain and France. The choir focuses on the highest quality choral literature from the Renaissance through the 21st century, has released a number of recordings, and is frequently invited to perform on commercial and public radio, as well as network television.

Named after Jenny Lind (1820-1887), a Swedish opera singer known as the “Swedish Nightingale” and considered the finest coloratura of her day, the Jenny Lind Vocal Ensemble is a select treble ensemble for those wishing to develop advanced choral skills and a better understanding of various styles of choral music composed for sopranos and altos. The ensemble is under the direction of Michael Zemek, with their chosen repertoire encompassing genres ranging from folk to contemporary to ancient to modern. And the Augustana Concert Chorale, under the direction of Sonja Hurty, is a mixed ensemble that performs a wide variety of literature from all style periods, and whose students gain a better understanding and appreciation of choral music through their on-campus concerts and study and performance of a varied repertoire.

Christmas at Augustana will be performed in Augustana College's Centennial Hall at 2 p.m. on December 4 and 5, admission is $16-21, and the Quad Cities' ABC affiliate WQAD will also stream the Saturday performance live online at Augustana.edu, rebroadcasting the event at 11 a.m. on Christmas Day. For more information and tickets, call (309)794-7306 and visit Augustana.edu/tickets.