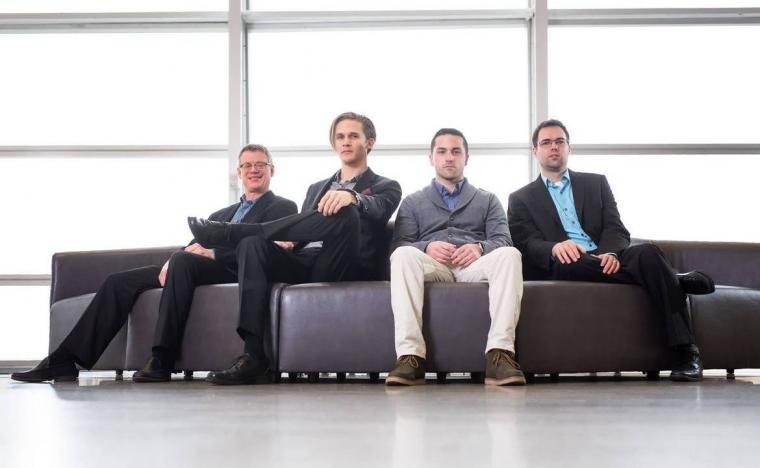 A jazz ensemble dedicated to making audiences very happy, and with the band moniker punctuating the “very happy” to prove it, the four gifted musicians of Christopher's Very Happy. Band play Davenport's Redstone Room on March 15, their performance as the latest guests in Polyrhythms' Third Sunday Jazz Workshop and Matinée Series operating from the premise that “now, more than ever, we all need a little more Happy.ness in our lives.”

The jubilant sound of Christopher's Very Happy. Band results from a combination of bright-sounding compositions played with joyous abandon by its four members: Christopher Merz, Michael Conrad, Drew Morton, and Dave Tiede. Individually, their performance credits include sets at numerous international jazz festivals, among them Italy's Umbria, South Africa's Guinness, and Switzerland's Montreaux and Ozone jazz fests, as well as national bookings in jazz festivals in Minneapolis, Des Moines, and Iowa City. All of the ensemble's artists have interests and experiences across the gamut of current musical styles ranging from classical to pop and electronica to soul, and Christopher's Very Happy. Band has recorded two albums to date in 2015's We Are Bathed In Sunlight and this spring's forthcoming While We Wait.

The University of Northern Iowa's Professor of Music Christopher Merz has served as director of jazz studies and the award-winning UNI Jazz Band One since 2002. Under his direction, the band has traveled to Thailand as well as the east coast of the United States, and has recorded 13 CDs featuring many original compositions and arrangements by student and faculty writers. The 2006 recipient of the CHFA University Book and Supply Outstanding Teaching Award, Merz was the 2016 recipient of the John L. Baker Faculty Development award, and was inducted into the Iowa Jazz Educators’ Hall of Fame in 2015. His recording credits include collaborations with Steve McCraven, Darius Brubeck, John Rapson, and Jon Snell, and his current projects include Colossus Central (a new big band led by UNI alum Michael Conrad) and Christopher’s Very Happy. Band., which exclusively performs Merz’s original compositions.

Among his bandmates, composer, musician, improviser, and educator Michael Conrad's award-winning compositions have been premiered by the West Point Army Jazz Knights, the Penfield Music Commission Project, and the New York Youth Symphony Jazz Band, as well as at Barack Obama’s second Washington, D.C. inauguration. Bassist and multimedia artist Drew Morton is a regular performer with Jack Lion, Laranja, and Koplant No, and in addition to his band duties, he creates graphics and animations that often accompany music recordings and live performances. Meanwhile, pulling bits and pieces from a variety of musical sources and genres helps drummer Dave Tiede create a versatile sound that he can call his own. Classically trained with a wide array of professional experience in music from jazz to rock, Tiede also teaches and appears as a guest speaker and clinician throughout the Midwest.

Christopher's Very Happy. Band plays the Redstone Room at 6 p.m. on March 15, with the concert preceded by a 3 p.m. “Jazz Demystifying” workshop with admission free for students and $5 for adults. Admission is $10-15 for the evening performance, and tickets and information are available by contacting Polyrhythms at (309)373-0790 and Polyrhythms.org or the Redstone Room at (563)326-1333 and RiverMusicExperience.org.